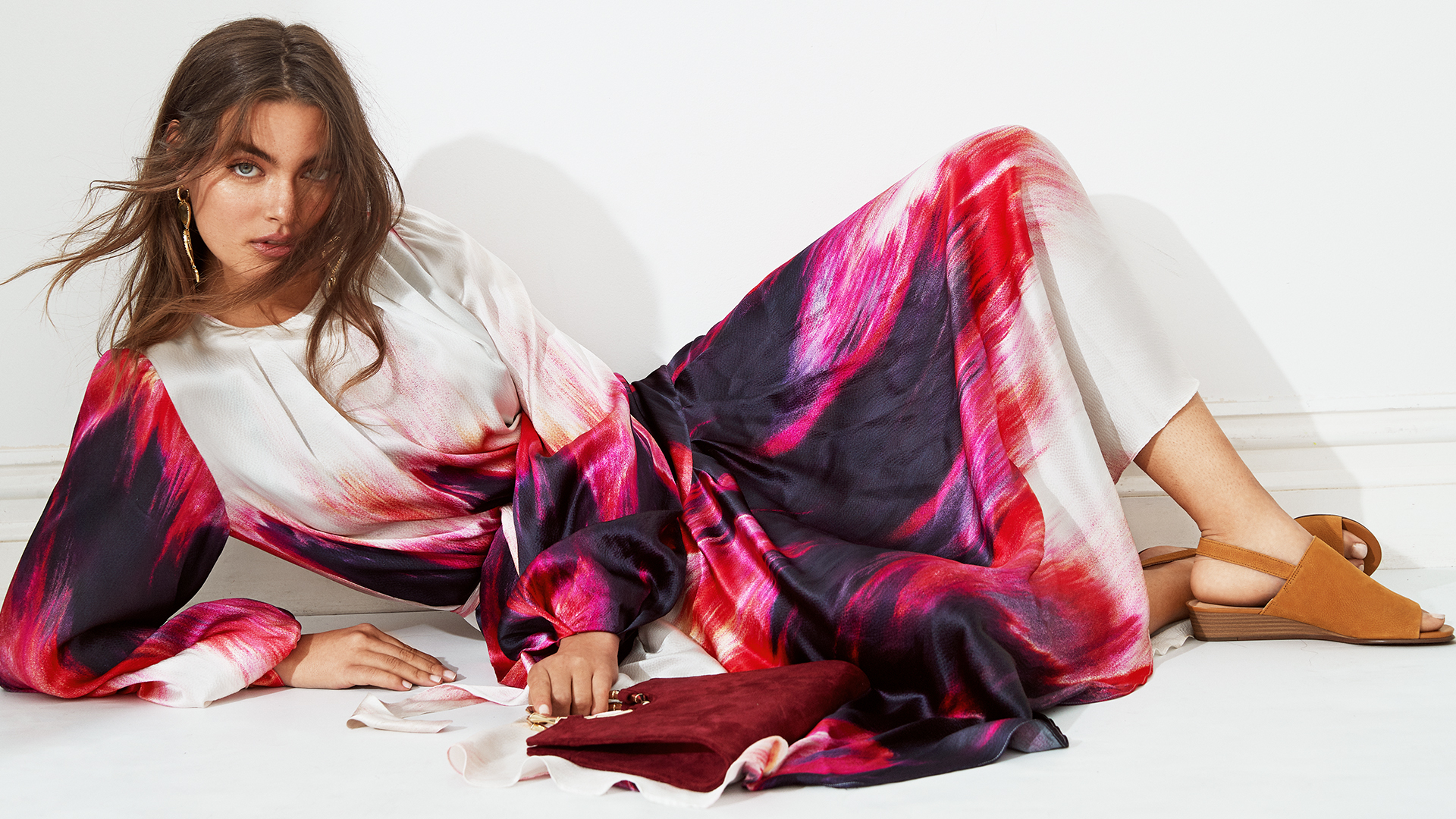 Acid washes and bright tones have transformed tie-dye from its hippie roots, but this runway resurgence looks a lot different than how you might remember the dye jobs from grade school, though. Surfer girl T-shirts might be the obvious and most accessible choice (and doubtlessly the incarnation most favoured by fashion influencers), but it’s the evolution of tie-dye that makes it feel fresh for 2019. Proenza Schouler applied the technique to denim, while Prada elevated the famously hippie print by using it on feminine silhouettes such as mini dresses and A-line skirts.

Tie-dye might be the year’s most saturated trend, but it has strong appeal in its individuality. Traditionally, tie-dye is made by tying bunches of fabric with waxed thread, so the dye only covers exposed areas – meaning no two pieces are the same. In the ’60s and ’70s, when tie-dye was pervasive, it became a symbol of individuality and creative expression through handmade, rustic versions that didn’t cost much.

Pair with slingbacks to elevate the outfit, or wear with plain white sneakers for a casual-chic vibe

Florals have had their day in the sun, but a change in the fashionable wind sees a new crop of vintage-inspired florals in bloom. A spring-summer mainstay, new-wave florals actually reference the good ol’ days with soft antique florals leading the nanna-fashion revival upon us. Richard Quinn heralded the return with his version of stylish upholstery, putting an ’80s spin on graphic, retro blooms with inflated proportion in puffy sleeves and operatic, trapeze-like shapes. While Coach drew on the illustrations of American artist Kaffe Fassett, clashing vibrant blooms on coats, shirts and bags in a rich, slightly psychedelic tapestry. Florals may be fashion’s most feminine trend, but it’s a look with remarkable versatility depending on how you sow your seeds. Tread carefully and gently, and quaint Liberty-like florals will flourish with whimsy. A little more water will see bold, expressive blooms come to life with full floral effect.

IT’S A JUNGLE OUT THERE

Fashion has long championed the intrepid but impossibly chic traveller. In the ’70s, safari sensibilities were rife with the safari suit a regular fixture in fashion circles (along with a pair of vertiginous platforms). In the ’80s, Ralph Lauren quite literally went on safari with then-muse Clotilde (model and actress Kristin Darnell) to Africa, while the ’00s saw a surge of nomadic, artisanal accoutrements. Today, safari-chic has evolved into a more streamlined aesthetic; a melange of relaxed tailoring, unfussy shirting and utilitarian detailing, which has seen the unexpected rebirth of the cargo pocket and belt bags. While Peter Do and Khaite rehashed the safari shirt in experimental colour, at its core is down-to-earth shades, the trend dictated by a muted, neutral palette of clay, fawn, khaki and white. But perhaps the obligatory accessory for any well-travelled fashionista is a sunhat, which comes in versions both big and small, taking its cues from Jacquemus’s oversized cult hit or a cute, neo-nostalgic bucket.

Like a shimmering, shiny mirage, metallics have been reimagined for the new season with a shine like no other. Polished up and redefined, they take on new sartorial form with designers like The Attico, Marine Serre and Rodarte pressing play on heavy metal(s). But unlike the gold and silver lamé of the ’80s, which is heavy in unfavourable cliché, designers have tempered metals with a fresh perspective and modernity, turning functional objects of fashion into shiny things of beauty. For example, outerwear takes a gilded turn with everything from bombers to long-like coats rendered in sheeny leathers and silks, while accessories and shoes take on molten-esque form. Even corsetry has been given a lurex-like update, with bustiers embracing a futuristic finish. While previously restricted to gold, silver and copper, new-wave metallics run the gamut in brilliant reds, punchy pinks and marine greens. Like a slick, stylish oil spill, a chrome finish is the ultimate symbol of glitz and glamour.

For a hint of glint, make your footwear fancy and try metallic slides. It’s the best way to add lustre to minimalist dressing

Consider new-season print the antidote to the dark romanticism of seasons past; both optimistic and full of life. Fashion designers have long referenced art and artists, but 2019 sees a return to art class of the literal kind, with broad brushstrokes and paint-splashed wares the apotheosis of the trend. Locally, designers Lee Mathews and P.E Nation indulged a moment of introspection, emblazoning their initials and names on frilly chiffon and pleated silks. While abroad, everything from antiquity to futurism was riffed by Louis Vuitton, Koché and Paco Rabanne. Pierpaolo Piccioli embraced an intellectual mood, taking inspiration from 19th-century neoclassicism by screen-printing poetic sculptures on silk-georgette gowns. While Acne Studios played on artistic inception with American artist Grant Levy-Lucero’s hand-drawn illustrations of potted blooms and teddy bears featuring on a series of T-shirts. Polka dot, stylised snake, ladylike leopard and reimagined logo also stars, either clashed in a beautiful mash-up or paired with clean block colour. As prints become packed with personality, it turns out fashion imitates art after all.