What's more, it's coming to Netflix

Just as I thought figuring out figuring out how to bake cinnamon rolls and doing a couple of Chloe Ting ab workouts that I found on TikTok was enough success for a year spent in quarantine, Zendaya – World’s Coolest Human Being – revealed she’s made an entire movie, and that said movie was sold to Netflix for $30m USD on the promo alone.

Back in July, it was reported that Zendaya had teamed up with Euphoria creator Sam Levinson on a project after it was confirmed that shooting for Euphoria’s second season would be on hold due to the pandemic. Apparently, Zendaya called Levinson and asked him to write and direct a movie for her to star in during quarantine, and naturally he agreed. Within six days, Levinson had the plot for Malcolm & Marie, casting John David Washington to star alongside Zendaya.

How are those cinnamon rolls looking now, you ask? Pitiful (but still delicious).

Though not much is known about the black-and-white film of yet, apparently, it focuses on a filmmaker (Washington) returning home after a huge premiere with his girlfriend (Zendaya). Instead of a celebratory evening, “revelations about their relationships begin to surface, testing the strength of their love.”

You’ll also likely need tissues handy as it’s rumoured to be a similar storyline to that of Netflix’s recent release, Marriage Story, a heartbreaking portrayal of a relationship breakdown starring Scarlett Johansson and Adam Driver.

As of this weekend, Malcolm & Marie has reportedly been acquired by Netflix after a battle between streaming platforms (new content is few and far between, after all). Netflix won the deal, purchasing the rights for the film for “near $30 million” based on the promo alone. A move that seems like a wild gamble, but hey, it’s Zendaya and therefore, we will all watch it. 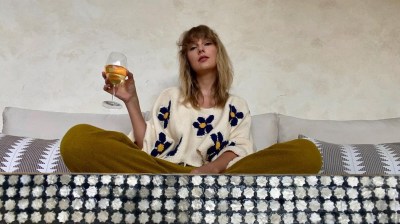 Zendaya And Tom Holland Reunite For New Project
Next page