Yes, Beyonce Might Be Pregnant – but Let’s Resist the Urge to Speculate 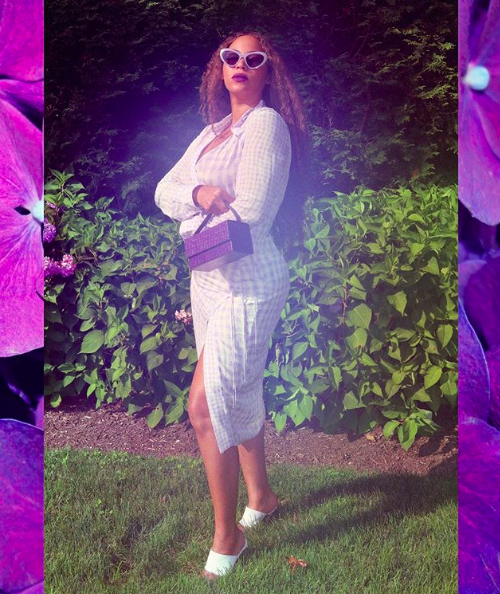 The Beyhive is abuzz with speculation that Beyonce might be pregnant again after she posted a photo of herself posing with a hand and bag placed across her stomach (above).

The comments section of the Instagram post is filled with Queen Bey fans who are convinced it’s a subtle hint that she and Jay-Z are expecting a fourth child, with the ‘evidence’ including a supposedly rounded belly and, er, the colour purple?!

It’s true that Beyonce, 37, could be pregnant again after giving birth to twins Rumi and Sir in June 2017. They’ve certainly got the means to add another child to their brood, and honestly, with that gene pool, they’d be doing the world a favour.

But to speculate as to whether a woman is pregnant or not is unnecessary and even, it can be argued, irresponsible.

Yes, even celebrities who choose to live so publicly.

Any woman who has had a miscarriage will attest to the pain of seemingly innocent questions from strangers before reaching that all-important 12-week mark. Losing a baby – or just the fear of losing a baby  –  is hard enough without the added pressure to divulge such highly personal information to complete strangers. Times that by … about six billion when you’re one of the most famous people on the planet.

We can also rest assured that if and when Beyonce is pregnant again, she will share the news in an epic fashion that could very well be the highlight of your week. Let’s not forget the beautiful image she posted on Instagram of her bare pregnant belly when she announced she was expecting Rumi and Sir.

Or in 2011 at the MTV Video Music Awards when, revealing she was pregnant with Blue Ivy, her first child, she finished singing Love On Top by saying “I want you to feel the love growing inside of me,” before unbuttoning her  jacket and rubbing her bump.

When she wants us to know, we’ll know.

Also, didn’t we learn anything from Jennifer Aniston’s big lunch?