Why We Love This Photo Of Taylor Hill

And why we need it

Scrolling through Instagram on Sunday, I paused. I scanned the photo once more, then paused again. Then zoomed. Double zoomed. Triple zoomed. Could it be? Was it not one, not two, but a cluster of pimples on model Taylor Hill’s face? Impossible. A photo on Instagram showing pimples?? I was in such denial I clicked her profile to be sure, only to find another similar photo from the same day, with the same light and the same pimples. Alas, she’s human, I thought. But it wasn’t the fact Taylor had pimples that attracted a second (and third) glance.

Why had this normal, ordinary photo of a pretty girl with a few pimples struck me so? Because I – like the rest of us – am now so versed, so accustomed to, so literate in this language of “perfection” that anything outside this filtered world looks strange. Odd. Different. Instagram is a world of white teeth and fake lips. Of no wrinkles. Of no crows feet when people cry. No laughing lines when people laugh. No nothing. Just smooth faces, blindingly white teeth and eyeballs that give Mr. Sparkle a run for his money. This photo was so jarring because it was so different to the common narrative of normative beauty perpetuated on Instagram. It was just so, normal. In today’s digital discourse, these two (now three – she’s since uploaded another showing a patch of pimply skin on her cheek) photos of Taylor are hugely important. It may not seem like much – big deal, she has a few pimples on an otherwise beautiful face – but it stands for something so much more. A photo which appears un-doctored and unfiltered, it stands with power and courage and very much alone in a sea of photoshopped “perfection”. And it is photos like this which help break the barriers of the seemingly eternal quest for this so-called “perfection”. Sure, Taylor will continue to post photos of herself glossed up and glam, eyes as blue as water on a windless day, lips pillowy and plush, such is the nature of her job. But because of her willingness to show the other side and be “real” on a forum which typically curates only the good bits is empowering. It’s a reality check, in the truest sense.

A quick scroll of the comments section below the image beholds a similar sentiment; one of empowerment, liberation and acceptance. An ebullient outpouring of support from young girls and boys sharing their struggles with their skin, and thanking Taylor for sharing hers. Cyber hi-fives all round. Of course, the light is beautiful. Her skin is still beautiful. She is beautiful. But the sheer transparency of these “imperfections” in the context of social media is now near unheard – particularly of the celebrity ilk. The message? Don’t underestimate the power of the pimple in an age which refutes imperfection of any kind. It’s evocative of a much greater good, of a rawness, of an honesty, of a truth which should roar ahead at full steam and rise above the plastic fantastic Zeitgeist of today. And we have never needed it more. 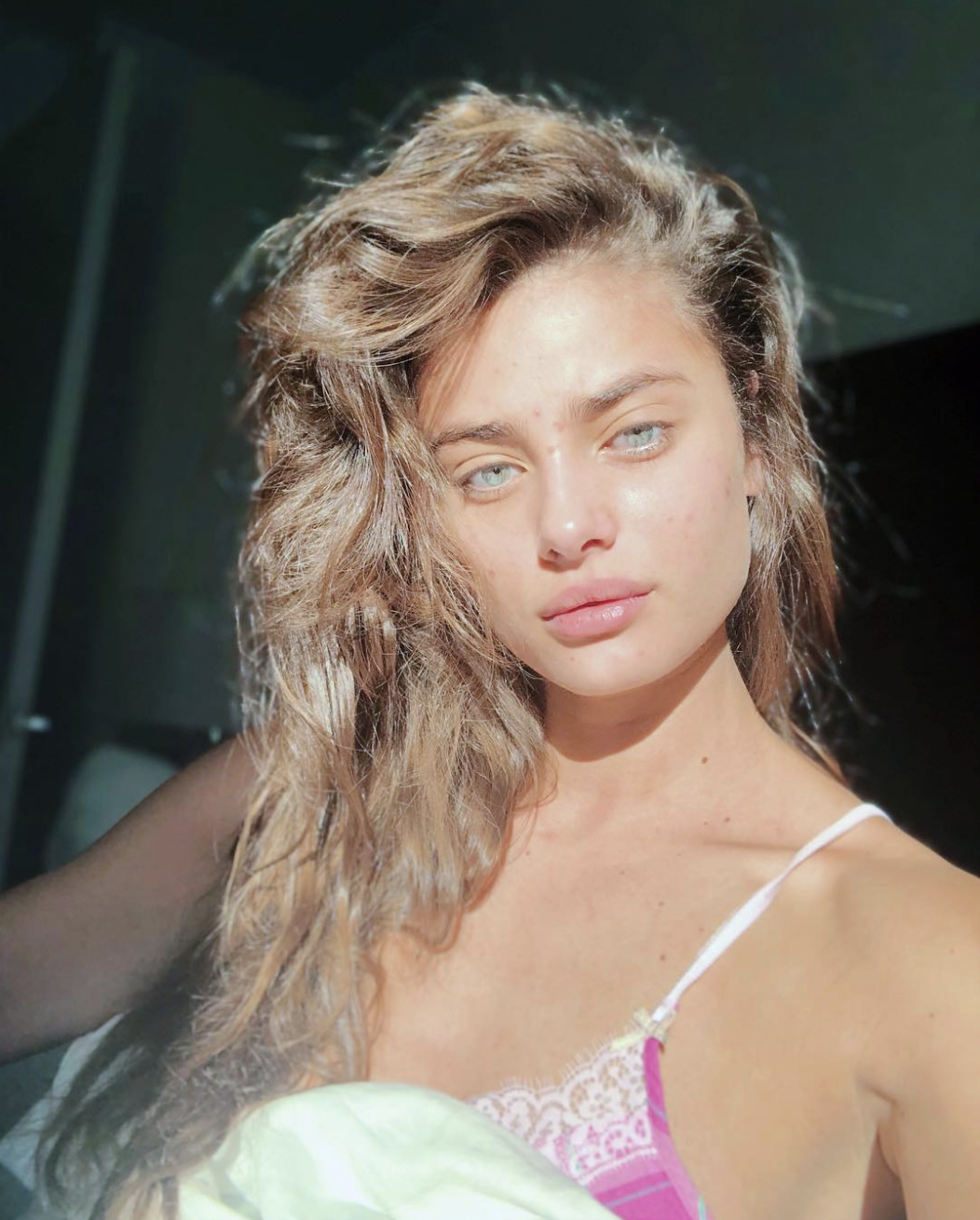 It’s a strong message of beauty acceptance, of skin acceptance, of embracing you – “imperfections” and all. And to a youth culture who predicate appearance over accolade and put these models and influencers on pedestals, the missive is clear: they get pimples like everyone else. They are human. They are “normal”. No one is above a breakout. Not even Taylor Hill. And this narrative is ever important in debunking the godly, “perfect” rhetoric bestowed upon these people. While it’s sad to think a few pimples equate to or define “normality,” it’s a sad truth which must realised, and then used as a powerful tool. If a few young girls are touched and feel better about their skin – and in turn their selves – from this series of pictures, then a hormonal breakout has never looked so good. Or been more important.

In light of Kim Kardashian’s scandalous body photoshopping of North, it is exactly the photo we need right about now.