You may not have necessarily thought that Lady Gaga and David Beckham interviewing each other makes sense, but that’s exactly what you’ll see in the latest promo for Tudor watches as part of their #BornToDare campaign.

The pairing actually works surprisingly well. They meet in a plush, moodily lit Los Angeles mansion with a pool overlooking the city.

They both look super chic — Becks in jeans and black turtleneck, Gaga in a sleeveless high-necked black dress and heels. Her hair is platinum and her eye-makeup, naturally, is dark. Obviously, they’re both wearing Tudor watches, but pleasingly the watches are not the focus of the commercial, and Tudor only gets mentioned once.

No, basically it’s just two legends having a chat — supposedly for the first time. Becks asks if he’s supposed to call her Lady or Gaga, before wisely settling on Lady, and then they ask each other questions drawn from a stack of cards.

They discuss their idols.

Becks’ are his working class parents — his 70-year-old mother is still working as a hairdresser in London, he says.

For Gaga, it’s her grandmothers. “In my darkest times they would say, stop your crying,” she says. “They’d say, you can cry for today, then tomorrow you get up and you keep going.”

Now we know where she gets that fighting spirit from.

They ask about the most daring thing they’ve done. Becks mentions free diving with Tudor recently (there’s the plug), before talking about the challenge of moving football teams from Manchester United to Madrid, with a completely different language and culture, and then moving to play in the US, despite some friends warning him against it.

“If someone says ‘Don’t do it,’ I’m going to do it,” he says. Gaga nods emphatically.

For her, being daring is just keeping going when the chips are down, listening to the voice that says you can instead of all the others that say you can’t.

Gaga, ever the entertainer, talks quite dramatically and with expressive hand gestures throughout whereas Becks is more chilled. The promo might have been scripted, but it comes across as quite natural and genuine.

Becks says to Gaga, “Your style affects culture in such an iconic way, how does it feel to affect so many people’s lives?”

“I don’t think God put me on this earth to be loved by the world, I believe God put me here to help people love themselves more,” she says.

“Being successful in our areas, being able to have a voice and make good use of that we are very lucky,” Becks says.

Lady Gaga extends her hand. “High five to that”.

Amen, sister. More of these kind of ads please. 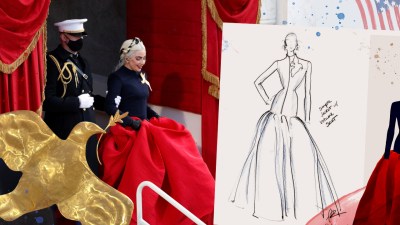