And Kate Moss heads up the colourful cast of its official ad campaign. Rule Britannia!

What do you get when three great British style icons combine forces to help change the world? Clothes that set to become cult classics across generations.

So who or what’s this wholly fashion trinity?

Westwood, who’s well-known for injecting political and social messages throughout her collections, has reworked some of her most popular and iconic pieces – double-breasted jackets, mini kilt skirts, lace-up platform shoes and even a beret – all created out of fabric featuring Burberry’s famous vintage check.

Called Vivienne Westwood & Burberry, the collection was created to raise funds and awareness for a UK-based environmental charity called Cool Earth, which fights deforestation and campaigns for climate change awareness.

The key piece in the collection is a $630, latte-hued tee (the colour, officially, is Antique Pink) emblazoned with a hand-written note from Dame Westwood and stamped with her signature orb logo in embroidery. The words is carries are simple but powerful: “Cool Earth has a plan to save the rainforest“.

The official campaign for the collaboration, shot in London by fashion photographer David Sims, features 11 models, plus Westwood and Kronthaler themselves, in a grainy, glossy aesthetic.

While all are colourful characters – including New York nightlife personality LadyFag, whose outlandish personal look is rumoured to have inspired Nicola Formichetti’s early styling of Lady Gaga – the star is without doubt OG iconic British supermodel, Kate Moss. Styled with slicked-back hair, bright red lipstick, and a check-on-check outfit, the 44-year-old is the third part of the iconic Brit triangle.

“Vivienne is the most unique champion of British style and has been a huge inspiration for so many of us,” said Tisci in July, when the collaboration was first announced. “I am incredibly proud of what we will be creating together.”

“Vivienne Westwood was one of the first designers who made me dream of becoming a designer myself.”

The collection is available online now, although all of the more affordable pieces – the $120 twill shorts, $150 socks, $530 beret, and $340 tie sold out very soon after release. Likewise, the long-sleeved twill shirt worn by Moss in the campaign.

What remains (for now) – pants, jackets, kilt, shoes and more – ranges from $770 to $2390. As the time this story was published, there were also stocks of the collection’s hero tee.

Dame Westwood will also be auctioning four pieces she’s personally customised to raise more funds for Cool Earth, although the date’s not been set. Watch this space, but in the meantime, see the campaign and collection in all their glory below. Rule Brittania… 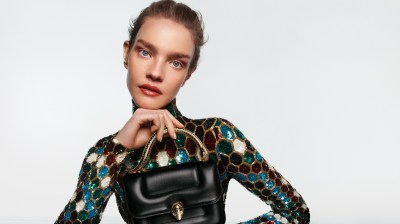