Hint: It's not what you think

Is supermodel wunderkind Rosie Huntington-Whiteley a fallen angel? Yes and no. Some would argue her pillowy pout is synonymous with something Heaven might reward those who led good past lives – and Huntington-Whiteley is straight from the sky above. Others would tell you that although the 31-year-old model is no longer part of lingerie giant Victoria’s Secret, she’s definitely not worse off.

In the latest episode of Girlboss Radio with Sophia Amoruso, Huntington-Whiteley discussed why she decided to leave the VS family and build her own business, Rosie Inc. “For me, at the time, I saw an opportunity to build something for myself with my name on it and to be in the driver’s seat of a business [where I could] work alongside people… that I’m working with instead of being the hire,” she said. “I’ve always been so aware that modeling is perhaps going to have a very short shelf life. I remember one of my first-ever agents saying to me, ‘You know, you better save your money because you’ll be done by the time you’re 27.’ I’m 31. It’s definitely different from how it was when I was 25, but it’s different in a good way. There is a shelf life to it, unless you build out something for yourself. I wanted to have something on my own.”

When asked if she would like to see her one-year-old son Jack enter the modelling world, she admitted it wasn’t her first choice for him although she would hope, as a parent, she was as open as her own parents were in letting their child do what they wanted to do. Huntington-Whiteley is engaged to actor Jason Statham and while he proposed two years ago they both are in no rush to walk down the aisle. “I think the time will come,” she told Extra. “We’ve been so focused on our work for so long and Jack came along, we definitely talk about [it]. We’re looking forward to that time. It’s also not a huge priority for us, we’re so happy.” 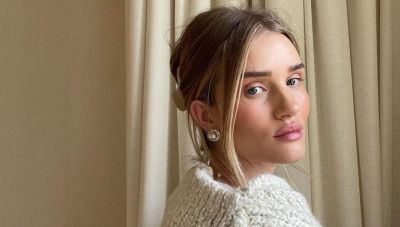