The Nanny Named Fran. Why The Flashy Girl From Flushing Will Always Be Our Style Icon

She had style, she had flair, she was there - that's why we still love the Nanny

As soon as Ann Hampton Callaway ‘s zingy theme came on, we knew we were in for a treat. After trying to reconcile the lyric, “She was out on her fanny” (baffling for Australians who have a very different meaning of the word), it was straight into the laughs, that nasally New Yorker whine and the fashion – oh, boy, was there fashion – of ‘The Nanny‘.

That unrepentant brand of glamour, the wonderful excess, the big hair, the tiny waist; basically she was the lady in red when everybody else was wearing tan – fearless, fabulous and unapologetic when it came to her style (and everything else).

Carrying forth the excess of the ’80s – the big shoulder pads, the colour, the chutzpah – Fran Drescher’s Nanny stood in stark polarity to the rest of the ’90s sitcom queens. While the Rachel’s, the Elaine’s, the Aunt Becky’s championed the minimalist movement of the decade, Drescher was like a beacon of brash fash glory, cut from the decade before (with hints of the swinging ’60s).

Whether it was in a Morgan de Toi orange flower suit, a holographic Versus Versace dress and baseball cap, or eating fried chicken on a park bench in a Betsey Johnson leopard and fur suit with matching beret, Fran Fine was a bonafide fashion icon.

Perhaps her greatest fashion legacy was the twinset – was there anyone so fiercely dedicated to a two-piece? It ran the gamut of elegant bouclé cropped blazers to hotted-up leather jackets and mini skirts, her itty-bitty midriff arguably the biggest star to come out of it.

On-screen nemesis, the bland and fashionably safe C.C. Babcock, often referred to her as “tacky”, but it was not an insult for Miss Fran Fine. In fact, she relished it, adding fuel to the fashion fire with outfits that were even more outré, more outlandish, more outrageous. Who can forget the famous Moschino piano key skirt? Or M&M’s mini dress? Or Todd Oldham rainbow suits? Indeed, her wardrobe existed as a kind of extension of her humour: entertaining, exuberant and at times, gloriously vulgar. 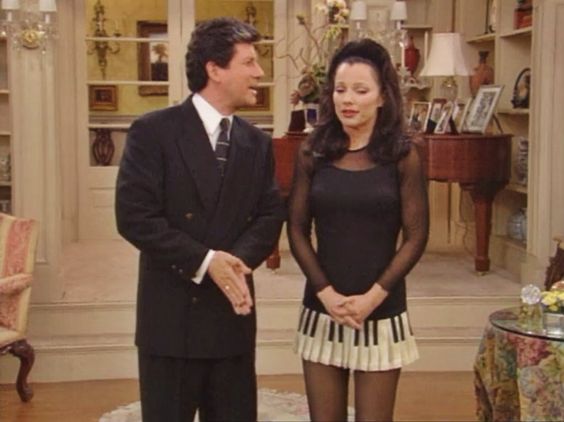 Today, the entire Nanny cast reunited for a table read of the show’s pilot via Zoom, giving its fans a little something special whilst in isolation. So in honour, we’re rounding up some of our favourite Fran Fine looks during ‘The Nanny’s’ euphoric six seasons.

Not only bringing “joie de vivre” to the Sheffield kids, she also brought joy to ours too. So here’s to our favourite fashion queen from Flushing. She really was damn fine.