From tired old baseball caps to jokes about exes, the stars have descended on lower Manhattan – and this is what they’ve been up to

Leonardo DiCaprio was inconspicuous – or is it now actually conspicuous? – in a tired baseball cap inside the Beacon Theatre on Sunday night as part of the Tribeca Film Festival in New York. The actor made a surprise appearance during a talk between Robert De Niro and Martin Scorsese and while the former talked about how her encouraged the famed director to meet the young actor in 1993 film This Boy’s Life – “He’s really a good kid” – DiCaprio didn’t speak.

Secretly sitting in the audience, he waved to the audience as Scorsese called him out from the stage.

A few streets away, Jennifer Lawrence was uncharacteristically telling a joke. The thing was, the joke was about her ex-boyfriend. Giving a talk on stage with her main director collaborator, David O. Russell, Lawrence talked about her work on Silver Linings Playbook and joked about her relationship with Darren Aronofsky.

Russell recalled the first he met the actress at an industry luncheon and she was speaking to Aronofsky. “Did a lot of networking at that lunch, I guess,” Lawrence said. Lawrence who worked on the 2017 film Mother! with Aronofsky, the pair started dating. Lawrence is now engaged to art gallerist Cooke Maroney.

Rami Malek and Lucy Boynton were spotted adorably hanging out hand-in-hand on the streets of Lower Manhattan on the weekend. The Oscar-winning actor – who will star opposite Daniel Craig as James Bond’s biggest villain in the yet-to-be titled 25th instalment of the franchise – and his girlfriend were spotted shopping in Nike and Sephora. Malek then hit the stage for an event in Tribeca titled “A Farewell to Mr. Robot.” 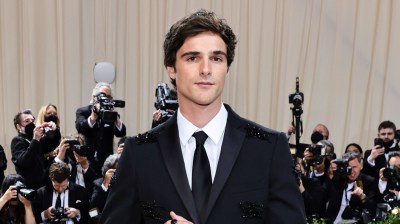