The designer has already taken over the fashion industry, now he's set his sights on media

Never one to play by the rules, in lieu of a typical runway show for his New York Fashion Week presentation, Telfar Clemens instead staged a mock press conference for his coveted namesake label in lower Manhattan on Sunday.

VIP guests and journalists alike were ushered into a room where they were seated and lined up in front of a long table occupied by Clemens and friends of the brand, including A$AP Ferg, Kandis Williams, Jonte’ Moaning, Ian Isaiah and Leilah Weinraub.

Part fashion show, part installation, part performance art, Clemens used the opportunity to announce the launch of his next project: Telfar’s own television channel dubbed Telfar.TV. Describing Telfar.TV as a “public access channel,” Clemens said it will be “a 24-hour, linear TV station.”

Telfar.TV will be a platform that will feature shows created in Telfar’s studio. It will also be where Telfar’s upcoming spring 2022 collection will be debuted, and where the brand’s new collaborations with Ugg will be premiered. Furthermore, fans can send in their own videos or stories to be broadcast on the channel—as long as their submission “has a vibe.”

In a bid to stop bots from buying all of Telfar’s highly sought-after products when they drop online, Telfar will now put out their own “drips” on Telfar.TV—releasing bags at random. Those trying to purchase one can scan QR codes, ensuring anyone who orders a bag will get one. “We release 10,000 bags each time, and 100,000 bots try and buy them,” Isaiah explained before breaking into song with the lyrics “drips not drops.” “Now we’re giving bags back to every single one of you.”

At the end of the event, Clemens wheeled out a surprise on carts covered by black cloth, immediately sending those in the audience wild. After a bit of teasing, Clemens lifted the cloth to reveal a Telfar duffel bag, which bears the “TC” logo on either side. Given the crowd’s reaction, Telfar’s reign over the fashion world is very much still going strong.

The Telfar.TV app can be downloaded through Roku or Apple TV (or viewed on its dedicated website). 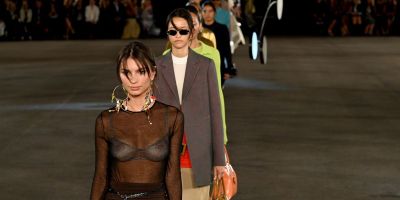 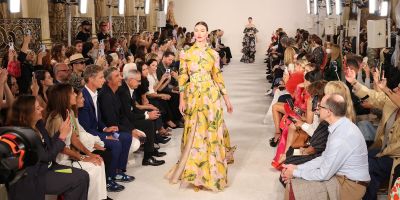