Future Park, a new exhibition by Japanese collective teamLab, is a colouring book come to life

These immersive digital artworks evolve with the viewer, sublimating the divide between art and technology 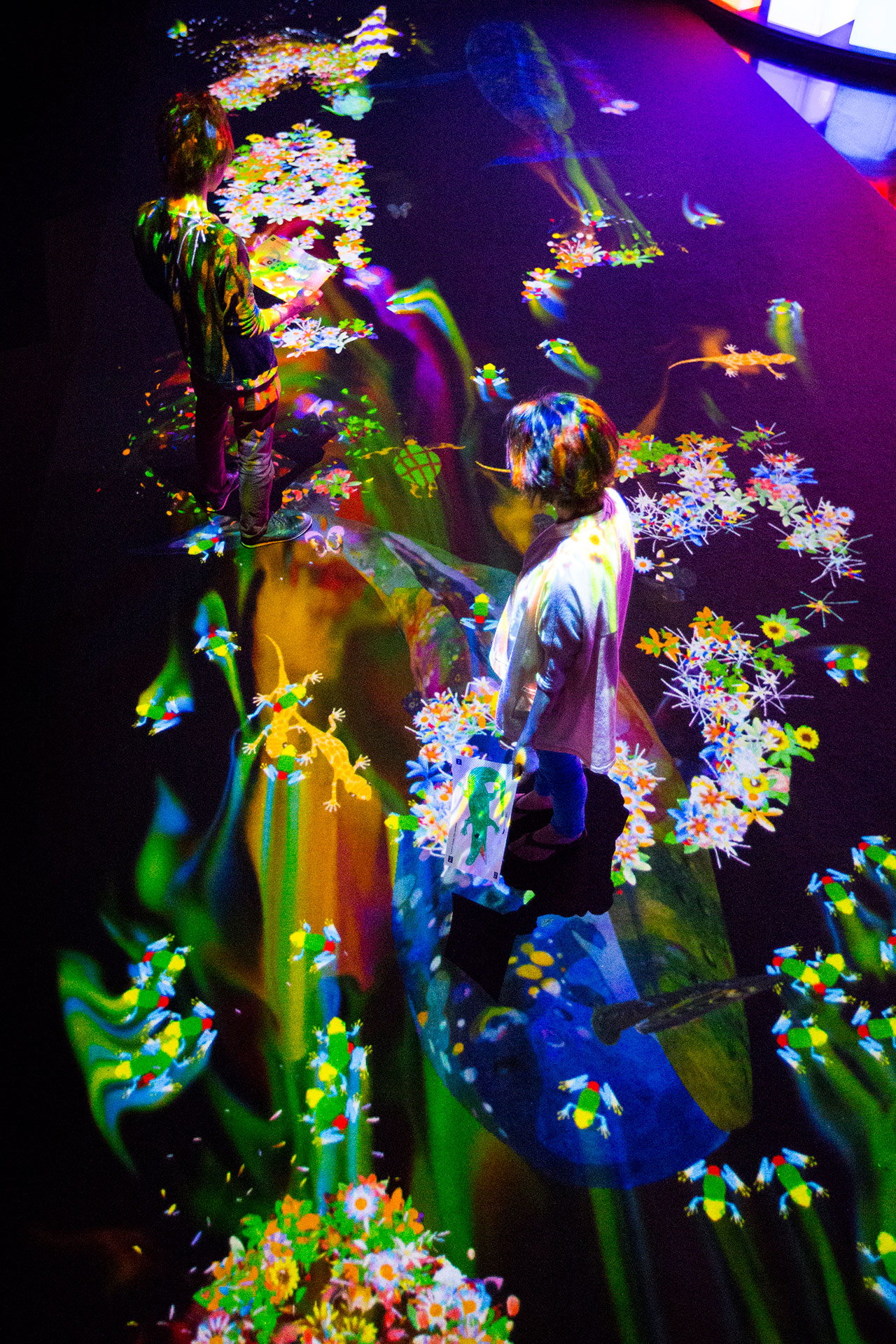 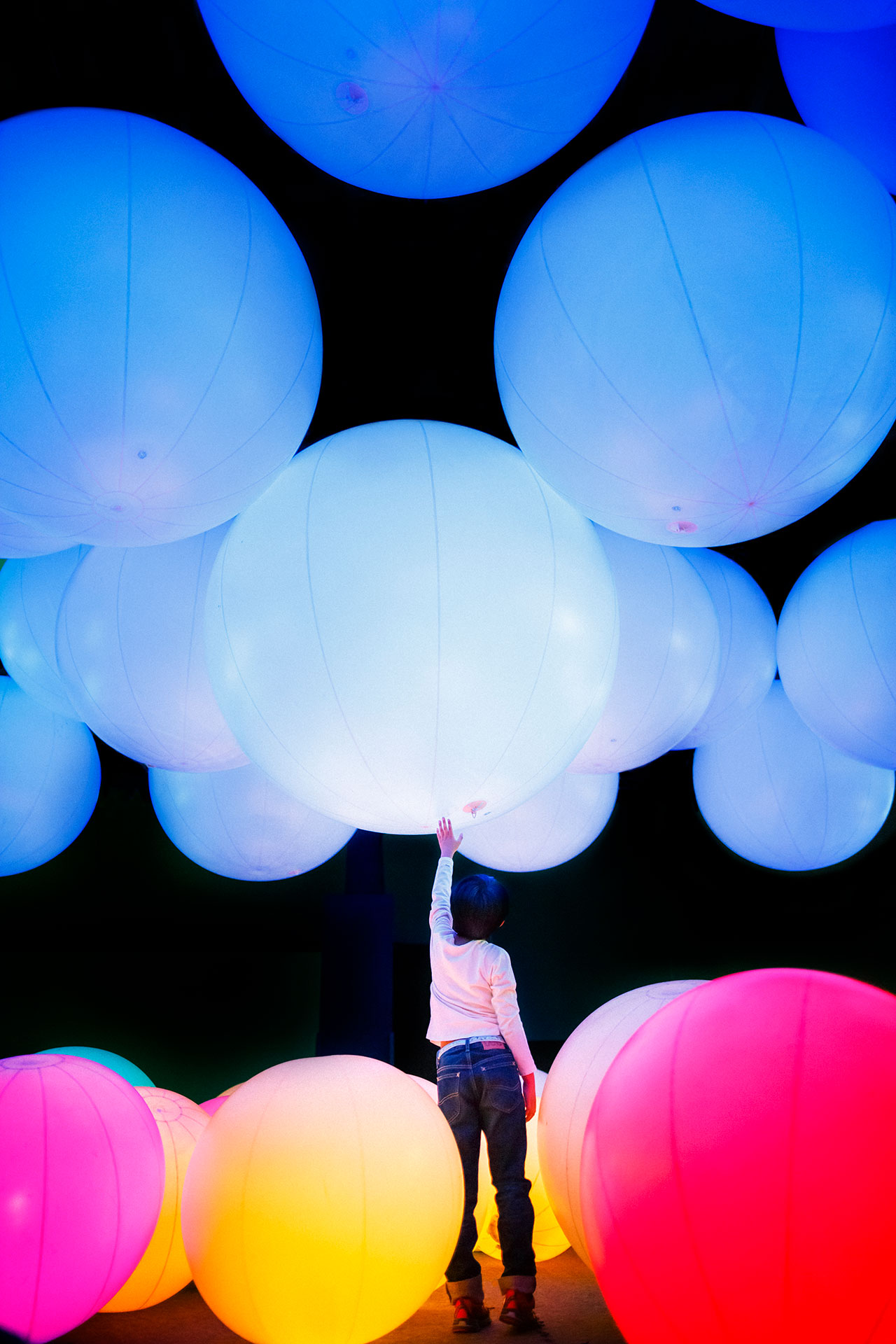 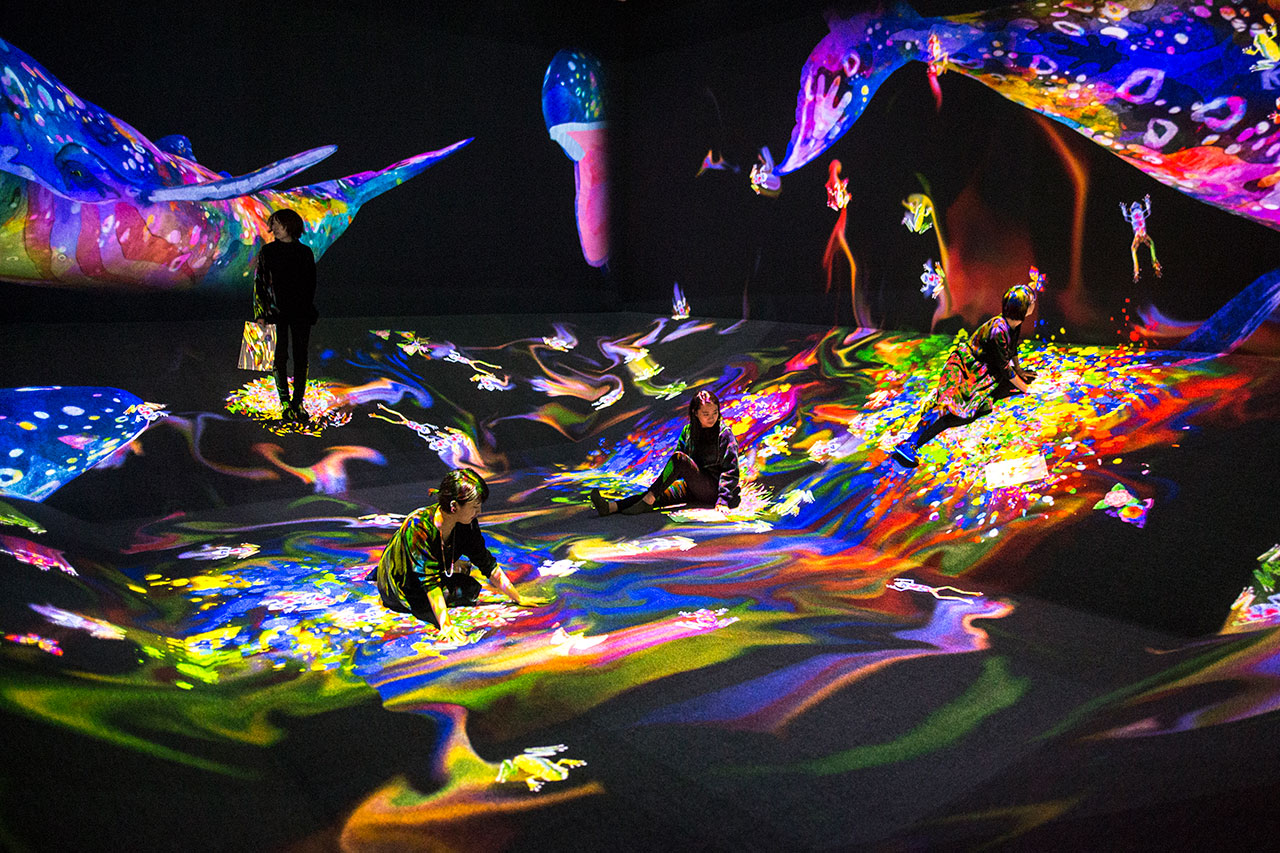 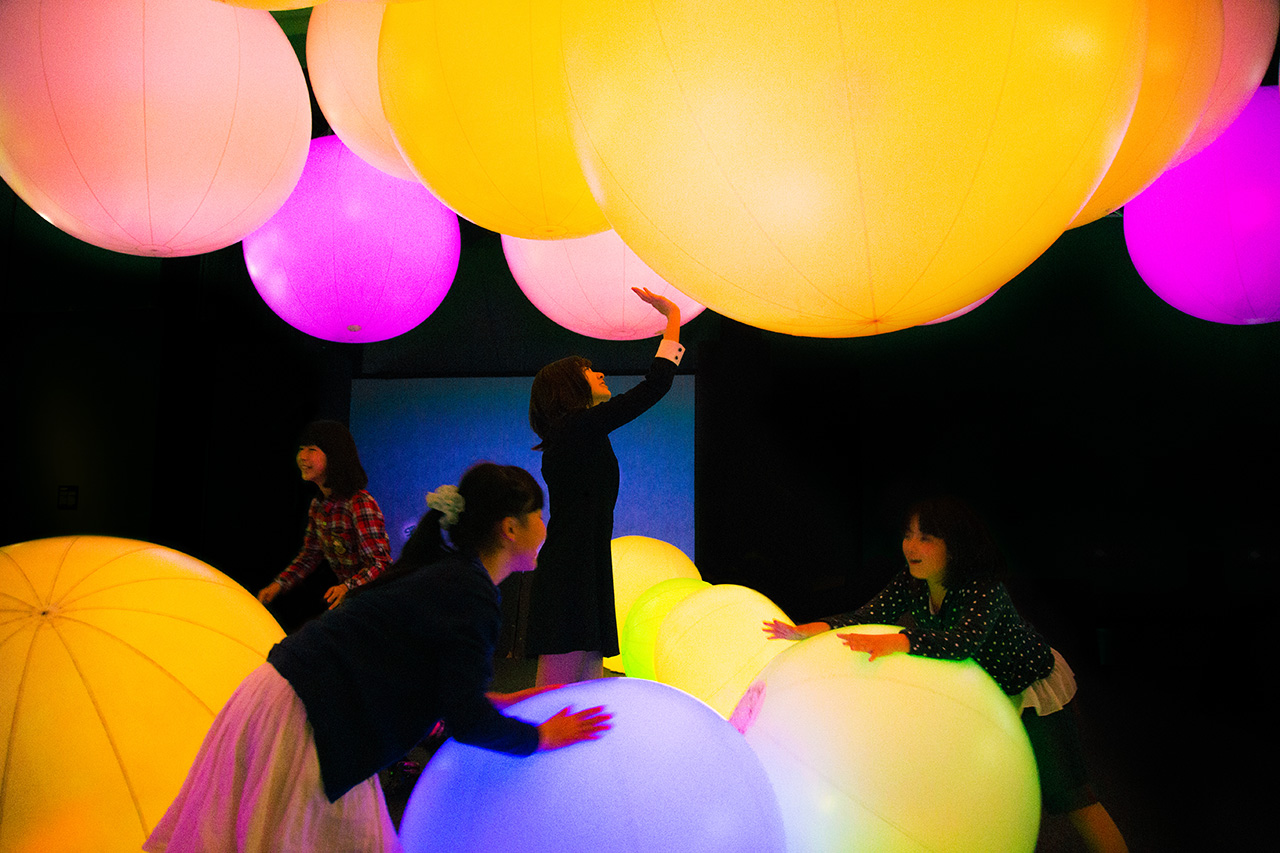 At each stop on teamLab’s Future Park world tour – in China, South Africa and Singapore; the United States and Indonesia – the reaction of adults and children alike has differed wildly from continent to continent.

In Japan, for example, the audience is very child-centric, with adults tending to stand back uncertain in their reserve and unsure of how to respond. In Italy, it would not be unusual to see a solitary man approach an installation, write ‘I love you’ on a piece of paper, scan it and step back as it comes to life before him.

Akitae Matsumoto, chief executive of teamLab, laughs on recalling the latter sight. It’s as apt a summary of the experience of viewing their work as you could hope for. To stand before, within or above teamLab artwork is to marvel at the wonder of the world, both real and imagined, regardless of your age.

Future Park at the Museum of Applied Arts and Sciences is the latest exhibition by the Japanese art collective: a collaborative, interdisciplinary creative group that includes artists, programmers, engineers, CG animators, mathematicians, architects, web and print graphic designers and editors. Often referred to as ‘Ultratechnologists,’ their stated aim is to achieve “a balance between art, science, technology and creativity.” Though this is their maiden voyage to Australian shores, the collective is represented locally by the gallerist Martin Browne, and TeamLab will soon unveil a new work in occasion of the National Gallery of Victoria’s inaugural Triennial, which opens next month. It is pitched as a being, “A ‘vortex’ using a digital floor which responds as water would to the audience’s presence and movement.”

The newly-arrived exhibition, which was some six years in development, features eight similarly interactive light installations never seen in Australia. Though the exhibition has toured the world as an extension of the organisation’s prolific output, this local iteration has taken on more topographical qualities that encourage viewers, young and old, to move throughout the space at a pace other than the one we associate with museums – glacial.

It would be easy to pigeonhole the experience as one belonging solely to the province of children, but to do so would be to take a myopic route that sees play as being only for children and creativity the concern of career artists only. The advent and ongoing popularity of adult colouring books would suggest that attitudes toward unfettered creative expression for all adults is slowly changing – an ethos that finds its full expression in the multitude of opportunities that Future Park presents for free form creative play.

“We don’t distinguish children from adults,” Matsumoto tells GRAZIA. “We want all people to come to this exhibition. There’s no focussed target [audience]. However, we want children to come to art museums. Normally, these are very silent places where children cannot run or shout. We want those children to come and have fun.” TeamLab, Matsumoto says, values above all the co-creative experience, and encourage their audiences to collaborate with each other as much as with the tools they provide. “We believe people should be more creative in this field. Recently, we added the essence that people should be more physical.”

That thinking results in works like Graffiti Nature – Mountains and Valleys, an elevated terrain onto which audience-generated animals drawn into paper and easily scanned are then projected, animated and brought to life. Colouring within the lines is not mandatory. The viewer scales the terrain and, inadvertently, steps on their work and that of others – sorry, kids – as they go. With each step, the creatures beneath foot are flattened into vivid bursts of colour and light.

“In total, our artwork is divided into four segments: lighting and projection; motion sensor; sound; and software development,” explains Matsumoto. “Those are the elements that are very important to our technology.”

The organisation was founded in 2001 in Tokyo by Toshiyuki Inoko and four friends from university. Matsumoto was invited to join six years later and has been with the company ever since. Today there are, Matsumoto estimates, 500 staff members who are then divided into two teams: “One is a team of professionals who [create] models, design and program; the other members are doing a catalyst’s job, they are connecting people together so that in each project we assign [both] specialists and catalysts.” There is no hierarchy, he says, and everyone from the CEO to freshmen receives an equal portion of the profits generated gallery and ticket sales alike.

TeamLab’s vision is one of co-creative experience at every level. It’s the philosophy that underpins all their efforts to date, especially Future Park. “If we keep in mind that philosophy, everyone can make what they want to make,” he says. You, essentially, can become a member of the teamLab team; you too can become an artist. Their goal is to engender good will amongst and toward digital art internationally.

Future Park features eight installations that respond to and evolve with their audience in real time. The inevitable Instagram sensation Light Ball Orchestra responds to the touch with inflatable balls, both small and large, suspended and rolling, emitting changing light and sound to create a cacophonous symphony. Hopscotch for Geniuses brings an age-old game to the vanguard of new technology. Sketch Town and Sketch People invite their audiences to illustrate and populate a town using their collective imaginative prowess, illustrating the citizens, vehicles, buildings and public places that are given shape through play. Once scanned, the images are projected onto interactive and immersive screen environments. Sketch People in particular is being exhibited for the first time in a pentagonal format in the middle of the gallery space. Matsumoto believes that presenting the work in the round and not in a two-dimensional format allows for a more engaging experience that immerses, rather than merely frames, the audience experience.

At one point during our conversation, Matsumoto’s nine-year-old son joins his father on a neighbouring stool and stares transfixed at the population of Sketch Town, who have broken out into synchronised choreography. One of Matsumoto’s two sons, he has travelled to each of the international instalments of the exhibition and, his father says, he doesn’t discriminate when it comes to picking favourites. He still marvels at each installation as though it were new, because essentially, that’s exactly what it is.

There are four teamLab works on permanent exhibition in Japan. A further two are staged at Singapore’s Marina Bay Sands, in Taiwan and Dubai. Though most teamLab exhibitions tour for little more than four months, Matsumoto envisions a future where there are more and more permanent exhibitions the world over. He hopes that with return visits, people will dig deeper to think about how the experience changes once the initial shock of that first encounter subsides and their engagement extends into childlike wonder, no matter your age.

teamlab’s Future Park will exhibit at the Powerhouse Museum until April 30, 2018. Adults only Summer late nights will be staged every Thursday evening throughout January between 5:30 – 9pm. More information is available here. 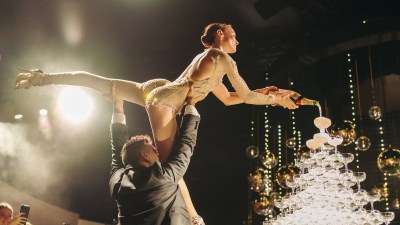 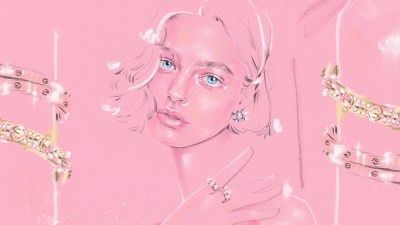 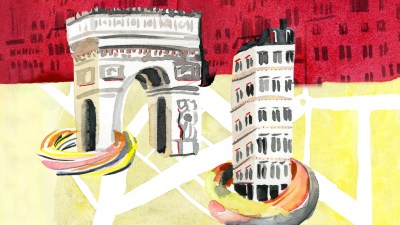 Work Of Art: Cartier’s Trinity Will Forever Be An Icon 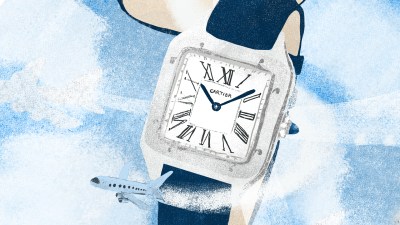 Work Of Art: Cartier’s Santos Has Been Making Dreams Come True Since 1904 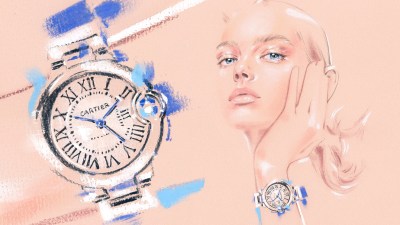 Work Of Art: How Ballon Bleu Signalled A New Era For Cartier 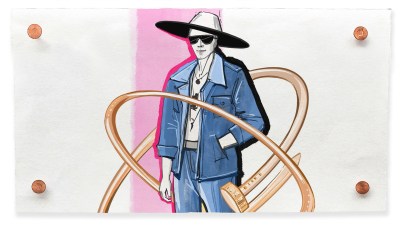