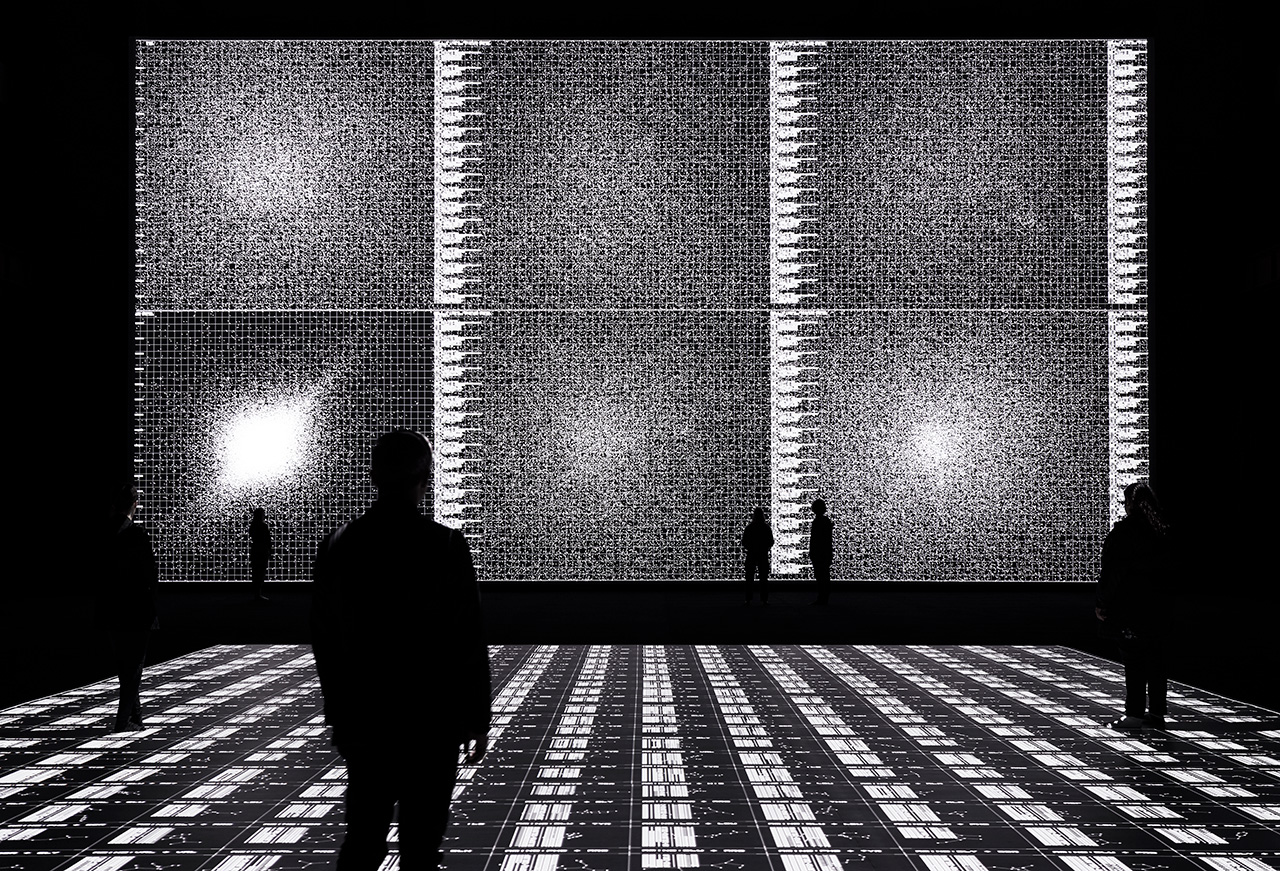 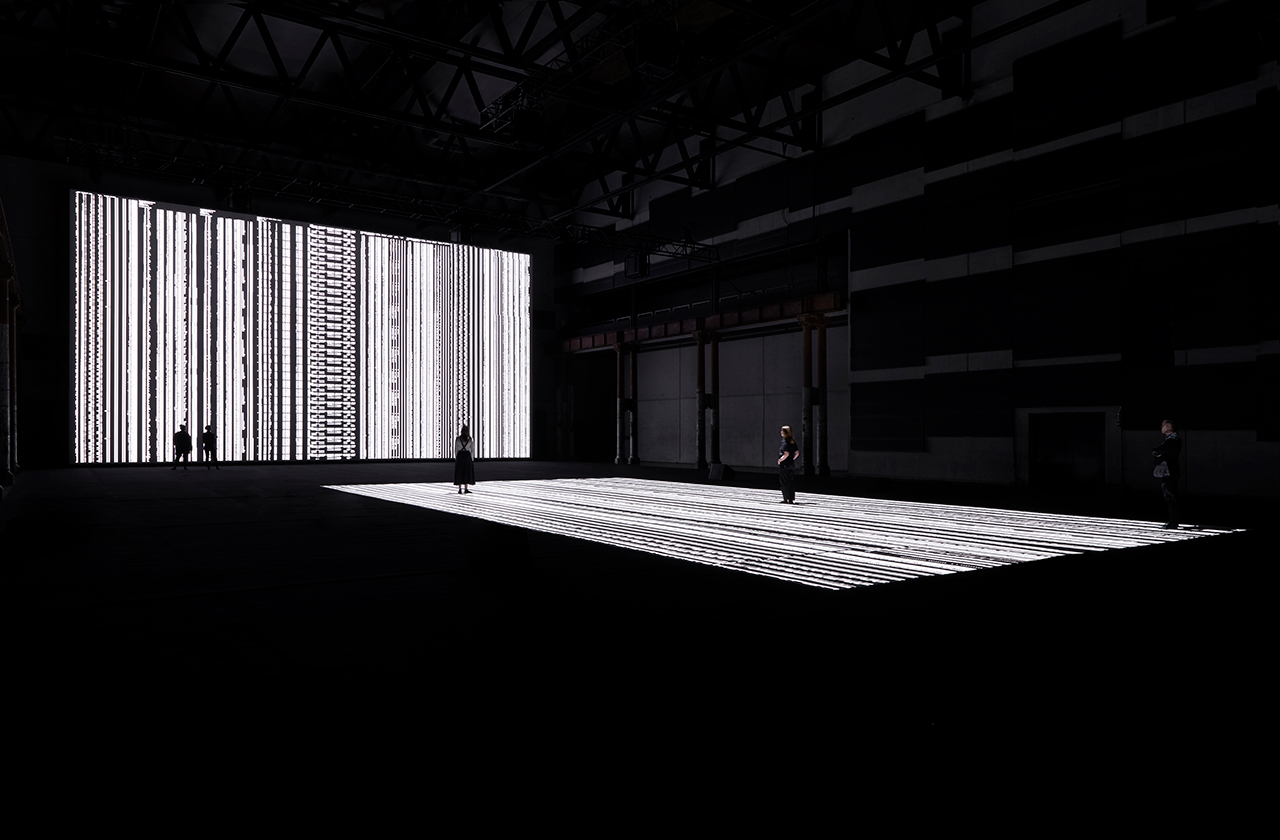 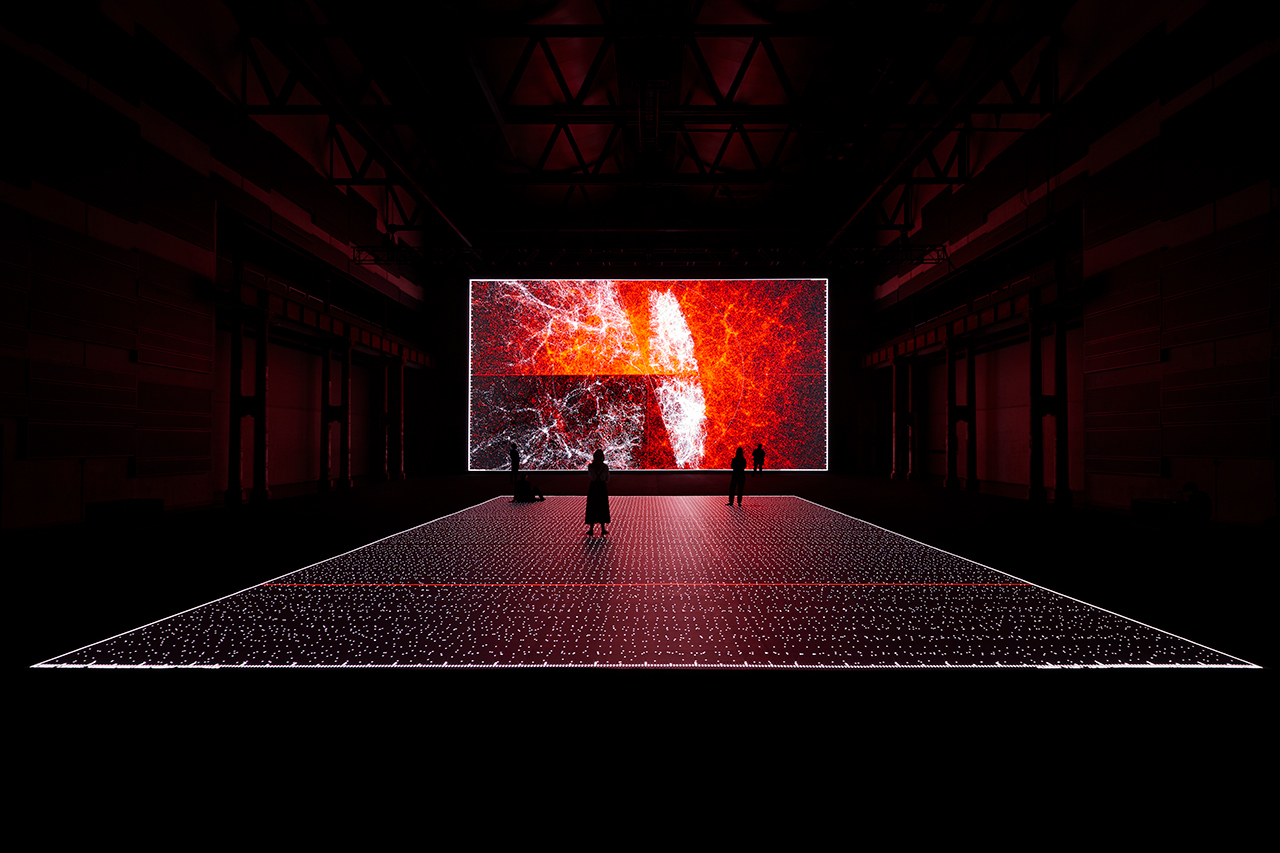 Spores are the first things that come to mind. Maybe they’re particle clusters, or an airy puff of pollen distilled into a single frame and writ large across a screen that wouldn’t look out of place at your local multiplex. Or perhaps they’re microbial growths that have been parsed into some kind of scanner, the disparate strands allotted with precise coordinates and rendered near three dimensional. Whatever they are, the movement of these pinprick points suspended around a central axis appears to bend the flat pane of the screen. Thermal images and grid lines interrupt the vast reams of codified information. Data points collide in orbit. Underfoot, sinuous molecular strands join together to create vast, wiry constellations that threaten to dissolve the floor underneath you.

All of that, within the first minute of Ryoji Ikeda’s micro | macro.

Perhaps it’s a mapping of the interior architecture of a lung, or an attempt to chart our plot of the infinite firmament in the simplest possible terms. Perhaps, if I’ve interpreted the work correctly, the answer is something closer to ‘all of the above’. In micro | macro, Ikeda’s nine-minute multimedia installation open from today at Carriageworks, what first becomes obvious is the artist’s overwhelming preoccupation with the mechanics of everything – the word ‘everything’ meant in the truest sense of the word. micro | macro takes as its subject matter the very structure of the universe on the scales that the work derives its title from, the smallest and largest forms of conceivable matter.

What Ikeda has created is a visualisation of ‘Planck matter’. A unit of Planck is, according to Carriageworks’ Director Lisa Havilah, “100 million trillion times smaller than a proton, and as we can’t actually see or measure it, particle physicists can only theorise about this matter and what happens at the limits of the laws of physics.” If a work the hinges around this concept sounds near impossible to describe, well, that’s because the particulars of quantum physics are exactly that. Thankfully, not knowing the first thing about Max Planck’s theory about ‘the spectral density of electromagnetic radiation emitted by a black body in thermal equilibrium’ will do little to hinder your enjoyment of Ikeda’s work.

In the simplest terms, micro | macro is a towering, immersive, electronic light-and-sound installation. The scale and nature of the work is utterly dwarfing, the images themselves verging on the sublime. Ikeda, an internationally celebrated avant-garde composer who straddles the worlds of visual art and musical performance (he recently DJ’d at Rick Owens’ all-night rave) orchestrates his work with mathematical precision. It’s fitting that these new installations were developed during a residency at CERN, the European Organisation for Nuclear Research in Switzerland, an organisation which was established to study the fundamental structure of the universe through the use of particle accelerators, most famously the Large Hadron Collider.

micro | macro is the third major installation presented by the artist at Carriageworks, after Test Pattern 5 (2013) and Superposition (2015). Though it has twice been presented at fairs around the world – in Germany in 2017 and Vienna earlier this year – its installation in Sydney signals the last time the work will be presented. The first part of micro | macro consists of an immense wall projection — measuring 10.8 metres tall by 20 metres wide — titled the planck universe [macro] that visualises the natural world scanned from the human scale to a cosmological scale beyond our observable universe. In front of the wall, surrounded by soft black carpet and where visitors who have removed their shoes may walk, lie or lounge where they please, a second work is projected onto the floor. Measuring some ten by 35 metres, the floor space is routinely flooded by finely articulated, incomprehensibly complicated numerical and graphic data rendered by the artist as barcodes, graphs and beautiful colour spectrums. Titled the planck universe [micro], this second projection interrogates the very building blocks of all matter, striving to represent what is infinitesimally small through enlarging it to human scale.

The floor work is bracketed by rows of deeply powerful speakers, from which peals a soundscape composed by Ikeda that careens from aggressive percussion to whirring white noise, organic whorling to synthetic blips. Ikeda’s guttural composition is intended to unify the visual works, though strangely enough, it registers before you’ve even entered the room –  its lower register throbbing and pressing into skin on approach. Ikeda’s sound and visuals are, for the large part, representations of his fixation with digital data rendered in the highest resolution: sine waves, pixels, and code translated into black and white or brilliant colour. Perhaps the most memorable passage features a rapid-fire montage that alternates between high tension images of eclipses and solar flares before dissolving into a torrent of impenetrable, barcoded data. In that moment, the work gives voice to the tension that exists between that which can be easily measured, quantified and categorised and that which cannot.

Ikeda rarely grants interviews, preferring instead to allow the work to speak for itself. “My work is created by reducing sound, light and the world into sine waves, pixels and data,” Ikeda offered by way of an artist’s statement. He does so, “so that the world can be viewed once more at a different resolution”. Perhaps it’s better that Ikeda doesn’t dissect his work in explicit terms. How else, other than in sound, abstract image and raw data, could he give voice to the kind of questions that elude us: how? and why? Ikeda does not concede much by way of answers to those grand philosophical quandaries, but what these phenomenal works lack in answers they more than make up for in sheer, awe-inspiring spectacle.