She's been living in her uptown world... in the Tiffany's store actually 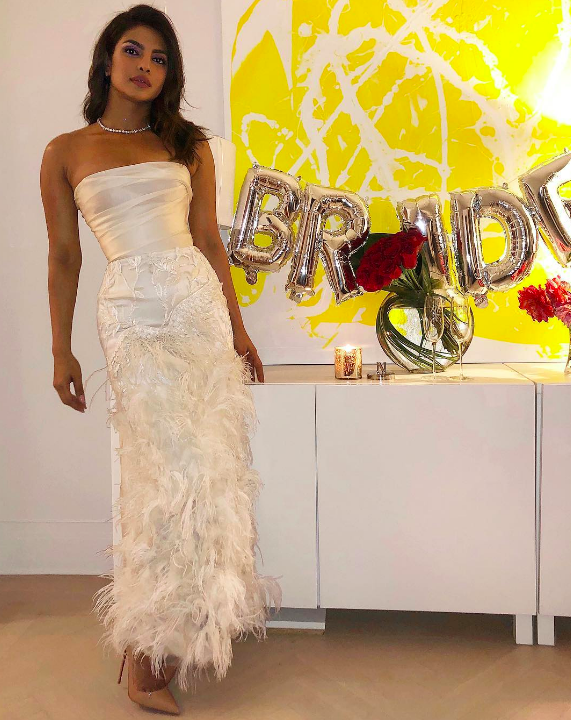 Where better to hold your bridal shower than at the home of the brand synonymous with love and engagement diamonds? Priyanka Chopra – dressed to the nines in Marchesa’s SS18 collection, Louboutin heels and Tiffany’s jewels – held her bridal shower at Tiffany’s Blue Box Café on Fifth Avenue in New York on Sunday night.

Staying on brand, the Quantico actress was proposed to with a $200 000 Tiffany’s ring by boyfriend Nick Jonas three months ago. The pair had only been dating a couple of months.

According to E! News, 100 people attended the pre-wedding bash including Danielle Jonas, Kelly Ripa and Lupita Nyong’o. Jonas’s mother reportedly gave a “touching” speech to Chopra and later chatted with her son via FaceTime.

Guests danced the night away to Bollywood hits and left with goodie bags (each with a mini cake shaped like a Tiffany box, a monogrammed passport case and bottle of champagne). Earlier this month, Chopra, 36, said she was excited to marry Jonas, 26. “It’s a very different feeling,” she said. “I never realised that having a boyfriend and having a fiancé are completely different. It just feels different; there’s gravitas. You feel like family, which is just so different.”

If the acting and music gigs don’t work out for the pair, surely this Tiffany’s-themed relationship has been signed off with royalties to last a lifetime.