Lockdown Restrictions Are Lifting In the U.S. — but Private Clubs Are Here to Stay

When it come to post-pandemic socialising, it's all about keeping a tight circle

NEW YORK CITY: The COVID-19 pandemic is finally waning as people get vaccinated and start venturing out, but social distancing is turning out to be one trend from the past year that could be here to stay.

The new gold standard for socialising and networking isn’t about hitting nightclubs and rubbing shoulders (or bumping elbows) in trendy restaurants. Less is now more, and a new generation of professionally and demographically diverse movers and shakers prefer familiarity. They’re taking the game behind the scenes in exclusive members-only clubs.

The idea of these private communities, such as the network of Soho House locations across the globe, has been around for years, but it’s accelerating and evolving now that people around the world have adjusted to — and even prefer — mixing with smaller groups.

The global pandemic sped up hotelier André Balazs’ plan to convert Los Angeles’ Chateau Marmont into a members-only hotel and then to expand the network into other cities.

“There is something to be said for knowing people,” Balazs explained to the Wall Street Journal last summer. “You can chat with them; you know where they have been.”

Meanwhile, on the East Coast, the Ciprianis have staked their claim in the landmark beaux-arts Battery Maritime Building. The Italian family, with the help of architect Thierry Despont, has transformed the building into a hotel, event space, and private club for around 1,500 members.

Meanwhile, hospitality leader Scott Sartiano also has tossed his hat into the ring in an effort to reinvent the post-coronavirus social scene.

One of the 1OAK entrepreneur’s latest ventures, Zero Bond in downtown Manhattan, is a tranquil oasis for those who don’t want the crowds but do desire to be around those they’ve never met and might find interesting. Sartiano says the hottest place to see and be seen isn’t about wealth anymore. Socialising, he says, is much more about cool over cost, selectivity over snobbery.

Co-owned by Sartiano and Will Makris, Zero Bond was inspired by London social clubs like the iconic Annabel’s. With the help of the design team at Studio Sofield —known for their luxury residential projects — the interior of Zero Bond was created  to feel more like home with serene furniture, exposed brick, and Baccarat chandeliers, including a breathtaking $120,000 crystal version that greets members upon entry.

At 20,000 square feet over two floors, it isn’t hard to find quiet places to spread out in Sartiano’s members-only club, a luxe oasis designed for those who don’t mind paying a premium for room to breathe. With artwork from famous artists — including Robert Mapplethorpe, Keith Haring, Andy Warhol, and Claes Oldenburg — adorning the walls, and a tranquil library area curated by Assouline, Zero Bond is more than a private, members-only club: it’s an urban lodge, social workspace, and a chic, dynamic alternative to working in the office or from home.

“Homes don’t have amenities. People don’t want casual offices or formal homes,” Sartiano tells GRAZIA. “We are in the middle, the benchmark for the ‘third space.'”

This “third space” includes a handful of drinking and dining options, including an American-style restaurant, Omakase, a Baccarat bar cart, and even cocktails to go.

“Zero Bond is about knowing who is part of the community around you and having space,” says Sartiano. His philosophy isn’t based on packing people in, but rather, curating a more intimate experience in the members-only club’s sprawling spaces, including the roof deck, grill room, café, library, and screening room, among others.

Until the pandemic is fully in the rearview mirror, members-only clubs like Zero Bond can also continue to keep a handle on keeping their patrons safe, Sartiano says.

After all, he notes, “people now have a different mindset and expect that.” 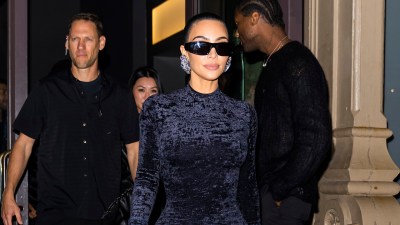 And Now, A Night At NYC’s Zero Bond With Kim Kardashian and Pete Davidson
Next page