Paris Hilton and Kim Kardashian have gone through everything together: from growing up in the spotlight and dealing with immense fame, fans and paparazzi, to having successful reality TV shows and a couple of called off engagements (and weddings). Now, Kardashian, who is mother to four children with her husband Kanye West, is helping Hilton on her journey to motherhood.

While appearing on the latest episode of The Trend Reporter with Mara podcast, Hilton revealed that she’s started in vitro fertilization (IVF) with her boyfriend of one-year, business Carter Reum, after advice from her longtime friend, Kardashian. But unlike Kardashian, who turned to IVF when doctors said it medically wasn’t possible for her to be pregnant with another child, Hilton said that she initially started looking into IVF because it was “the only way” she could ensure that she can have “twins that are a boy and a girl.”

“We have been doing the IVF, so I can pick twins if I like,” Hilton shared, according to PEOPLE, revealing that Kardashian – who gave birth to her youngest two children via surrogate – was the one who educated her about the procedure.

“I didn’t even know anything about it”, Hilton said. “I’m happy that [Kardashian] told me that advice and introduced me to her doctor,” she added, saying that she’s already started the process and completed the egg retrieval procedure.

“It was tough, but I knew it would be worth it. I did it a couple of times,” Hilton said, before going on to say that she’s incredibly happy to be going through the experience with her “dream guy,” who she plans to marry.

“Just doing it together and having a partner that is just so supportive and always makes me feel just like a princess all the time … that it wasn’t that bad,” Hilton said. “I’m really excited just to move on for the next step of my life and finally just have a real life. Because I really do believe that having a family and having children is the meaning of life,” she continued. “And I haven’t got to experience that yet, because I didn’t feel like anybody deserved that love from me, and now I finally found the person who does.”

In September, Hilton spoke about her plans to have twins, sharing that she’s already picked out a name for her future daughter: London. “I have baby London, which is the girl, and I’m trying to figure out a name for the boy,” she during an episode of the LadyGang podcast. “So if you have any suggestions, I’m asking my friends. I don’t want a theme of cities, but I don’t know – it’s hard to decide. London for sure for the girl; the boy, I’m just still trying to decide on.”

In December 2020, Hilton celebrated 13-months with Reum, writing on Instagram, “Ever since the moment we locked eyes, I knew there was something special about you. And then when we had our electric kisses on the tennis court I saw that I was exactly right! I love everything about you and everything you have done for me. You have changed my life in so many ways and made me become the woman I was always meant to be. And I have never felt happier or more alive.” 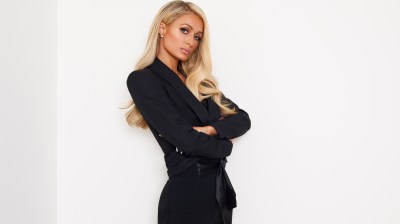