Spending half the year in Europe, the born-and-raised New Yorker and global style icon, Olivia Palermo, returns home and spends time with GRAZIA. We explore her self-made empire

A quote Olivia Palermo gave a UK publication in 2010 captured me. “You need to have a long-term plan,” she said of her rise to fame. “You can’t look at it like a deer in headlights and only think about being in the moment. From the very first day I decided to start all of this I thought, ‘This has to be lasting. How is this going to work in 15 years?’ That’s how I look at it.” And how the interviewer marvelled at the business-savvy mind of the then 24-year-old. She had a strategy behind cashing-in on her moment, a sharp-shooter with a sensible mind and laser-beam focus. “Well, I’m a New Yorker,” Palermo told the journalist.

Today, the now-32-year-old is the very successful American version of the UK’s Alexa Chung, Italy’s Chiara Ferragani and Russia’s Miroslava Duma. A business woman and entrepreneur, it would be remiss of our publication to come to New York and not interview Palermo; she is indeed as much a part of the NYC sartorial and social fabric as the designers who want her front row at their shows at New York Fashion Week in a couple of weeks time. And, just like her outlook on her career eight years ago, she has staying power.

Palermo arrives fresh-faced on our set at Gelso & Grand in the heart of Little Italy in New York; a pocket of the city that is vital, energetic, bustling during the days and expensive all of the time. Courier trucks speed down Mulberry street and yet it’s 8am and nowhere is even open to serve coffee – good coffee – but of course the Gelato man is serving up stracciatella and espresso-flavoured dreams across the road. It’s America, after all. “Where did you guys find this space?” Palermo asks, politely extending her hand to every member of the (mostly Australian) crew. “The great thing about New York is you have so many different areas, you have China town, Little Italy. As the years have gone by, unfortunately this area is becoming a little too Americanised, and they are losing that little extra touch. But still, I like the idea of it and I think it’s perfect for a scouting location!”

For how direct Palermo is in her mannerisms, she’s also incredibly gracious. Her publicist has requested Palermo have a say in today’s styling and in the land of fashion journalism, that can wreck premature havoc on the crews psyches with an assumption that a talent will be fickle, difficult and hard to work with should they disagree with the fashion director’s aesthetic. Palermo is none of these things. “With everything that we do, I have a very hands-on approach, there’s always a true sense to my own brand on it,” she says. “But I always really love going into any shoot and working with a new team, I think that’s really nice. Throughout all the years of being in this industry, I’ve had the great fortune of working with incredible stylists, assistants, photographers and directors and I think that with every shoot, it’s important to keep an open mind and learn from those around you. The chemistry today is very easy, very organic.” To her, communicating what you want is all about how you communicate it. “I am a straight shooter,” she continues. “It’s very important for people to know what you want but then, I always find that there is a way of communicating. And by doing that, I think you’ll get your message across a lot better.”

Growing up between the swanky area of Greenwich in Connecticut with her father, a real estate developer, and the Upper East Side in New York with her mother, an interior designer, the importance of a good work ethic was drilled into Palermo early. “It came down to my parents who educated me on that from a very young age; you let your work speak for itself and you have a good support system around you. You make sure you do the best you can and there’s no complaining.”

Palermo attended university at The New School where she studied media. She also studied in Paris at the American University. Her career took off when a famous New York society photographer named Patrick McMullan took her picture at a series of events in 2006. (Girls still scan McMullan’s website to see if they have been snapped as he documents the happenings of fashion designers, models, actors, politicians and cultural icons in The Big Apple.) As the invitations to more events with society’s elite began to roll in, Palermo gained prominence and soon was named the city’s number one It girl rival to Tinsley Mortimer – the daughter of a wealthy Virginia rug salesman. Forget Serena versus Blair, this was a real-life thing that was happening on the Upper East Side with McMullan – with a lens and not a keyboard – as Gossip Girl.

“Being a New Yorker, you love that energy and you thrive off of it. The city has opportunities. It’s a part of me.”

In 2008, Palermo was cast to star in MTV’s “reality” television show The City – an urbane spin-off to the hugely successful LA-based The Hills. The story followed Whitney Port, a supposed up-and-coming designer and Palermo was her scripted nemesis. Both worked under Diane von Furstenberg in her New York office. It was this moment that Palermo capitalised on. And so it were this experience that taught her the ropes about the industry she was entering. “I was a young person but I understood how the entertainment business worked and how the television industry worked and the production and all the elements that go on behind it,” she says. “Fashion is a very different industry. I’m definitely more of a fashion person and that was more for me.” As for her style ten years ago compared to now, Palermo says it has always remained one thing: polished. “With age and time, everything evolves, everyone’s eye evolves,” she says with a smile, possibly remembering some of the late 2000 trends. “You definitely have a different eye on things when you are 19-years-old than you do when you’re in your thirties. My style has been eclectic and I’ve had the great fortune to be able to see everything. I still like to be polished. It’s very important for everything to tell a story. Accessories can tell a very different story of the aesthetic.”

That love for fashion was then expressed through her own website which she launched in 2011, it’s fashion, beauty and lifestyle editorial content churned out by a team of writers and contributing editors in New York, London and Hamburg. “It’s so important that the people you work with are a reflection of you and that we’re all on the same page”, she says. “It’s more important than anything to make sure you manage your business properly and to be very hands-on. Everything I do has to be very organic and very authentic to who I am.” There’s that New Yorker attitude again.

Part of expanding her brand was facing big brand campaigns. To only look at recently – and there’s been so many in the past – Palermo has collaborated with the likes of Aquazzura, Banana Republic and Piaget. In 2018, the entrepreneur capitalised again on her global style icon status by establishing the Olivia Palermo Group, a “modern lifestyle company that celebrates contemporary femininity, nurtures a dynamic role in culture and asserts a clear aesthetic point of view and identity.”

Her husband, German model Johannes Huebl, makes a cameo on today’s set. The two met through mutual friends in 2008 and married in 2014 in a small ceremony in Bedford, New York. Like Palermo, he takes the time to greet every person individually and is extremely personable asking so many questions about everybody else. A huge support to Palermo, the couple split their time between their beloved New York – where they reside in Dumbo in Brooklyn – and Europe. (“My husband and I spend some time in Italy and on the Amalfi Coast. I love Milan. Italian craftsmanship is incredible, its unrivalled, its unlike anything else”.)

When in New York though, Palermo has a soft-spot for TriBeCa, where she previously resided (also known as the precinct which took over the Upper East Side as the city’s richest). “Being a New Yorker, you love that energy and you thrive off of it. The city has opportunities. It’s a part of me,” she explains when coaxed about the romanticism and allure of the city. “I spend a lot of time in TriBeCa. I’m also at Tracy Anderson when I’m at home working out. My office is in the city, I try to bounce around to little places and if I can I stop into boutiques every once in a while I do, although I don’t have that chance so often.” You’ll find the couple dining at the upscale-casual American restaurant, Loring Place, at 21 W 8th St.

While her reality television counter-parts are planning their cameos for the re-booted The Hills reunion on MTV, Palermo is plotting her navigation of NYFW (“Talking trends, I’ll be as pleasantly surprised as you are! I love Zimmerman though, Michael Kors and Self Portrait). Her next move, however, will be for oliviapalermo.com. And we’re sure she’s asked herself: How is this OP empire going to work in 15 years?

THIS ARTICLE APPEARED ORIGINALLY IN THE SEPTEMBER EDITION OF GRAZIA MAGAZINE AUSTRALIA.
SUBSCRIBE HERE TO RECEIVE TWO PRINT EDITIONS PER YEAR FOR $20AUD 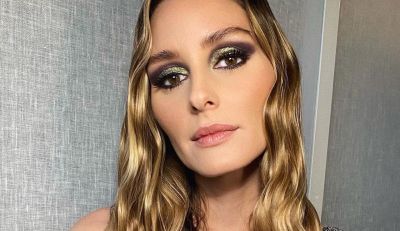 Was Olivia Palermo The Weekend’s Best-Dressed Wedding Guest?
Next page