Because after the show, it's the after party

They came, we saw, they conquered. As the dust settles on another Academy Awards, Hollywood’s elite say sayonara to Awards season with a drink and dance at the famous Oscars afterparties – and of course do it in superb style.

The hottest ticket in town (after the ceremony itself, of course) is typically Vanity Fair’s fabulous soiree, where the billowing ballgowns and refined outfits are replaced with a more revealing, sexed-up aesthetic charged with high-octane glamour. This year, celebrities arrived drenched in sequins, colour and cut-outs, with many a leg reveal.

Scarlett Johansson kept it it tonal but amped up the sex, wearing a similar gown to the beautiful Oscar de la Renta creation she wore to the ceremony – this time sporting a side cut-out which revealed her large eagle tattoo.

Emily Rata reminded us that crunches are her best friend, wearing a skimpy white bandeau and hip-hanging column skirt, the look proving divisive on Instagram (fashion’s greatest critic). While on the flip side, Elizabeth Banks wore a look lauded by the Insta community, donning the same lipstick-red Badgley Mischka gown she wore to the 2004 Vanity Fair Oscars Party, saying: “It’s gorgeous and it fits, so why not?”

And of course, the one, the only, Mr Billy Porter, who subbed out his spectacular Kensington Palace-inspired, 24-carat gold Giles Deacon frock and custom Jimmy Choo platforms for another regal ensemble; a plume-flocked, cape-laden top, leather gloves and wide-brim hat in the most royal of shades: purple.

A night of exceedingly good sartorial highs, an In-N-Out burger is looking like a very good option right now. 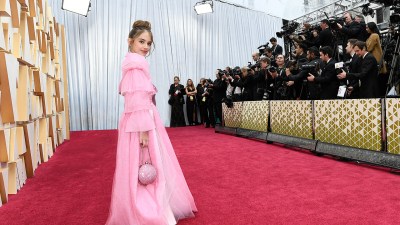 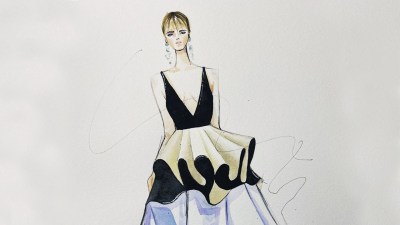