From python coats, pompadours and two-pieces, Arianne Phillips gets us clued-up on what it took to bring Sharon Tate, Rick Dalton and Cliff Booth to life – and the foot fetish which started it all

GRAZIA: When you were first approached to interview for this role, you weren’t allowed to take notes or pictures of the script which made the sketching for the characters difficult. How did you get around that?

PHILLIPS: “I wanted to take a presentation to Quentin [Tarantino]. I got to read the film’s script first but I had to go to the office to read it and – it’s true – I wasn’t allowed to have my phone or take any notes but Quentin is a fantastic writer, his script was unlike any script I’ve ever read. It was just really, really lush with all this detail and great descriptive words that he used to describe his characters and the location. Everything in the script was just so beautifully written that I was able to absorb it. It took me about three hours to read which is about twice as long as normal because it really read like a novel. When I was done reading it, I just went down to my car and made as many notes as I could so that when I started making the presentation, I was able to remember as much as I could. It’s a real tribute to Quentin’s writing that after just the first read I was able to able to really absorb what the story was about.”

GRAZIA: Speaking of Quentin’s complex characterisation, which descriptions stayed with you?

PHILLIPS: “In 1969, Hollywood was going through a change and one that was reflective of what was changing in the culture. People were going from pompadours to long hair like in [1969 film] Easy Rider, so that was what stuck with me as a metaphor for how the culture was shifting.”

GRAZIA: Your resume is fascinating to research, you’ve worked with such huge names. But were you nervous to meet Quentin during your first meeting?

PHILLIPS: “I was excited to meet him, I’m a huge fan of his work and the truth is, I have actually met him before. I dressed him when he was doing the promotion for [2009 film] Inglourious Basterds. I got hired to be the fashion editor on a photo shoot with Quentin and Diane Kruger for The New York Times. I didn’t expect him to remember me but it was the first thing I said to him when we re-met on Once Upon A Time and he was like, ‘Oh yeah, I love that picture.’ Quentin is famous for his foot fetish – you will notice there are always a lot of feet shots in his movies and Once Upon A Time is no exception – and I had this idea of putting him in women’s high heels for the shoot. Quentin said, ‘I love that photo, I always get compliments on my ankles!’”

GRAZIA: How much creative control does Quentin have over designs or how meticulous is he on set when it comes to wardrobe?

PHILLIPS: “Quentin is a director with a specific style and he has a vision. I mean this film of all his films is probably the most repertoire, the most naturalistic, although Quentin is a great story-teller and he’s also a great visual stylist so he has a lot of ideas and its written in the script. He is one hundred percent collaborative, he is not a micro manager at all, he hires people and expects them to bring something to the table. There’s always a conversation and there’s always a discussion. Everything starts with the script and it’s just a reference point from there but as the costume designer, my job is to expedite the director’s vision. So the wonderful thing with Quentin is he understands how important costumes are in creating character and he loves the process and he has a lot of opinions. For me, I much prefer to work with a director with a point of view and opinions and if you look at my career, it’s been based on working with strong personalities – because I am a strong personality – and I know that when I work with a great artist who has a point of view, it raises the bar in the conversation and makes my work better.”

GRAZIA: Costume Designer Julian Day told me that he had less than half the budget to work with on Rocketman than he did on Bohemian Rhapsody which I just found insane! Did you have a very big budget for this film or did you find yourself having to be a little more resourceful?

PHILLIPS: “My job as a costume designer is to be responsible for my budget. I’ve never ever worked on a project where I had an endless budget, there’s always budget restraints. It doesn’t matter how big or small the project is, and I work with fantastic people who I partner with and hire to run my department with me. I hired a costume supervisor called Lynda Foote to help me – I’d been waiting ten years for our schedules to sync up and they did on this film. Margot [Robbie] has 16 costume changes, Leo [DiCaprio] had 22 and Brad [Pitt] had 11.” 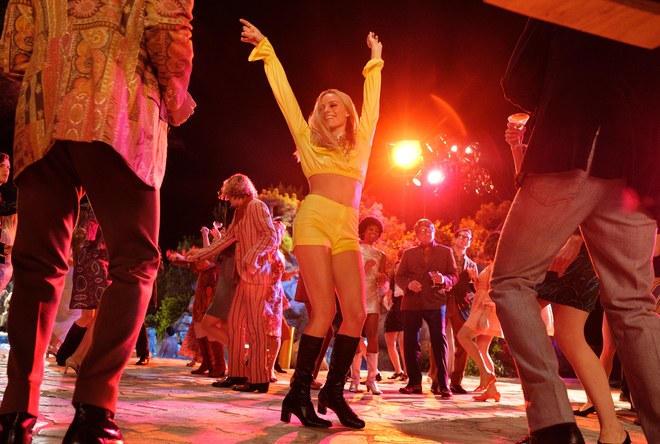 GRAZIA: Margot’s character Sharon Tate doesn’t have a huge amount of dialogue so we sort of lean into the costumes to tell her narrative. We see Sharon’s happy spirit shine in that yellow two-piece at the party. How did you arrive at this look?

PHILLIPS: “Sharon Tate’s character really represents innocence and I think Margot did such a beautiful job of embodying that light sense of freedom and self-expression and innocence. Really the story is centred around Rick and Cliff but Sharon has a very good presence in the film. I think Margot’s work is so sublime. When I researched Sharon, she famously wore English fashion designer Ossie Clark who was very popular at the time. Sharon and Roman Polanski actually lived in London for a while and Sharon would have beautiful fashion sense. I did a lot of scouring and engaging with vintage experts and dealers and shops all over the country, and even in London, looking for certain Ossie Clark pieces. Along that journey, I came across a vintage dealer who showed me the yellow two-piece and I just loved the energy of it, I loved the colour. Yellow is a fun, shiny, happy colour that looks particularly good on Margot as Sharon. I wasn’t sure it was going to make the cut in the film, because she wears it under this full-length snake-skin coat that I made – I wasn’t even sure if she was ever going to take that off – but then we decided when she walked into the Playboy Mansion party that she should take it off. And I think its wonderful. The proportions are really beautiful on Margot’s body and I felt like it embodies the spirit of Sharon.” 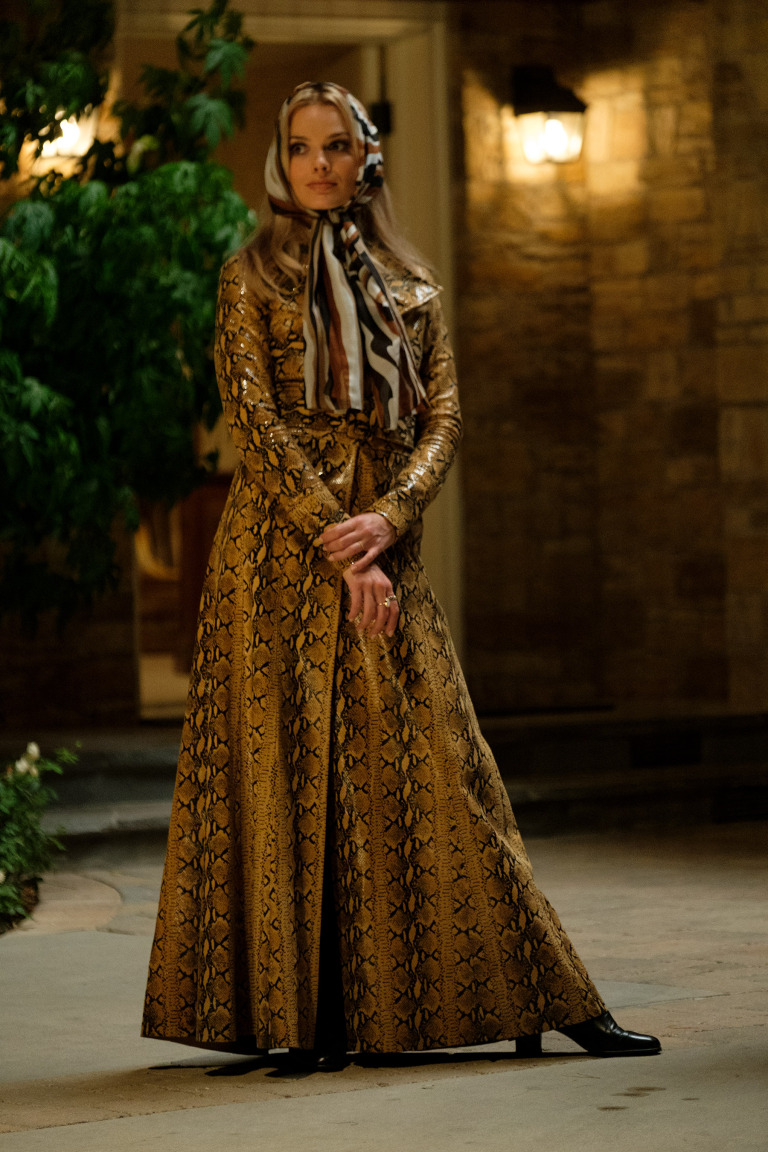 GRAZIA: What went into physically re-creating the python coat and how long did it take?

PHILLIPS: “That coat is based on a python coat designed by Ossie Clark that Sharon was famously photographed in at the premiere of [1968 film] Rosemary’s Baby. I couldn’t find it anywhere, I looked really hard and I came close and found similar pieces but not that coat. I believe it was bespoke and made specifically for Sharon. Quentin really loved that coat as well so I made it. As pythons are endangered animals, I chose to make a faux version which I feel like was a modern choice that I made. I guess it took us a couple of weeks to make. We had probably three fittings on Margot with it.”

GRAZIA: When you were working with [Sharon’s sister] Debra Tate, what was one of the most surprising things you learnt about Sharon?

PHILLIPS: “I didn’t learn anything particularly surprising. I think Debra just underscored for me what I had read about Sharon; about her kindness and her warmth and I guess I learned more about her sense of humour from Debra. I got to see some of Sharon’s clothes, and looking at the proportions of her clothes, I realised Sharon was quite petite. I guess it’s always a surprise when we think of an actor as some giant when most of the time they’re smaller in real life.

“Sharon hated wearing shoes and she liked going barefoot all the time. She would put rubber bands between her toes to pretend she was wearing sandals when she was going to dinner. I thought that was just really wonderful.”

“It took a real weight off my shoulders to be able to have a dialogue with Debra about Sharon and to be able to have the support of the family. I felt a personal responsibility to honour and have a reverence about how we would depict Sharon and Margot and I shared that, and Quentin did as well, so it was a very unique, touching, tragically sad, but privileged experience that I’m really honoured I got to be part of.” 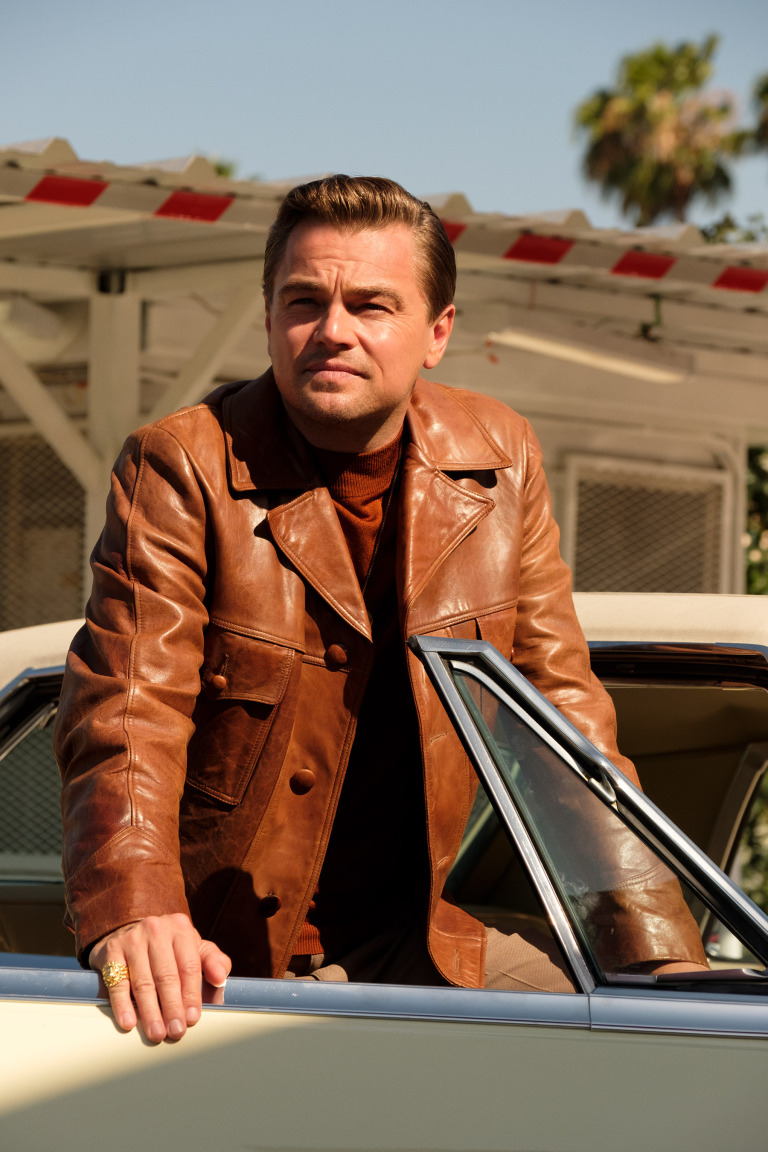 GRAZIA: Rick Dalton’s brown coat. How did you arrive at that and did Leo have any input into it?

PHILLIPS: “I was always going to make Leo a leather coat for Rick Dalton and it came out of a conversation that Quentin and I had. Usually what I do in my fittings with Leo is gather together as many vintage coats from the time period to see how the proportions would look on his body and what would suit him the best. Then Quentin joined us on a fitting and when Leo put that particular jacket on, there was no mistaking it: I don’t think I could have designed anything that was any better, it fit him perfectly. I had to make a couple of minor alterations and restore it a little bit but I just thought at that moment ‘I don’t need to remake a jacket’. I made a couple of other jackets for him but that particular jacket was a real vintage jacket.” 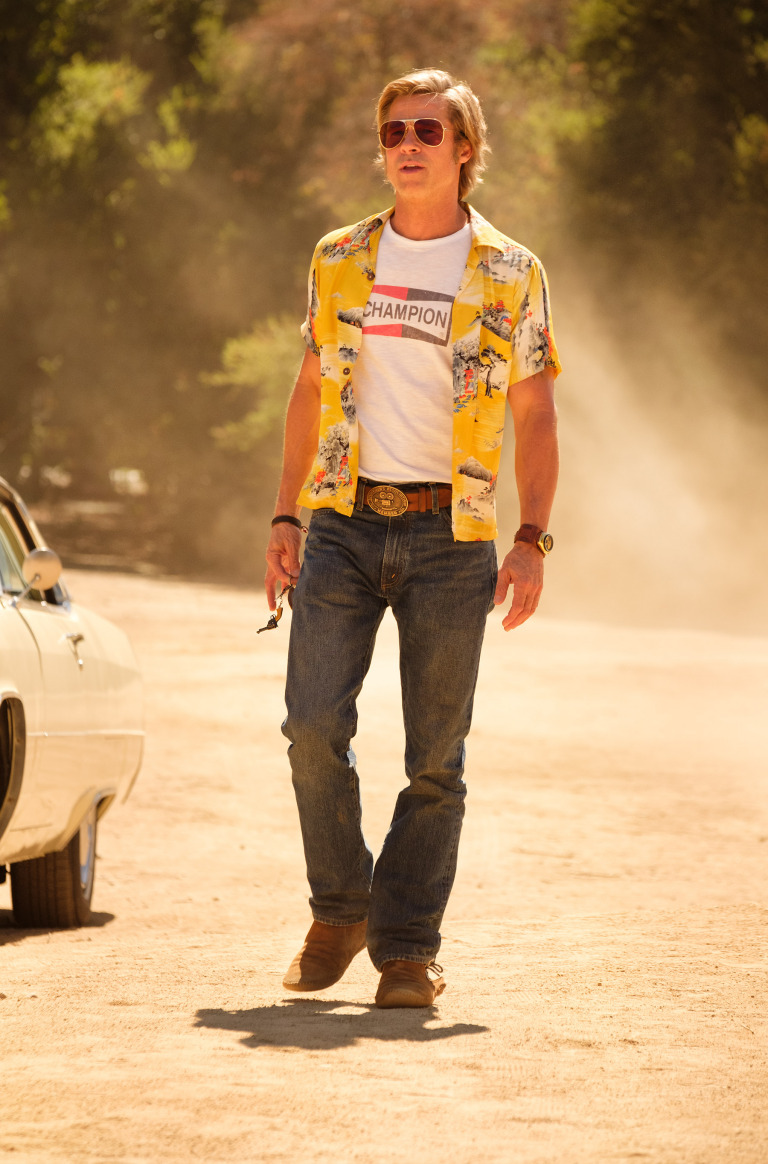 GRAZIA: What was your first encounter with Brad Pitt like? What was he like on set and how involved was he for the costuming for Cliff?

PHILLIPS: “Brad and I had met before, but the first time that we saw each other making a movie was at this first fitting, and it was just lovely to see him again. Brad is a constant professional and a gentleman, he is very collaborative and the fittings are really kind of a magic time when the character comes together visually. Up until that point, Brad and Quentin had spent quite a bit of time together discussing Cliff Booth and what the character was about and Quentin communicated with me in many different meetings about those conversations and what the approach was. Brad’s impression of who Cliff was what kind of sent me on my way hunting and gathering for particular pieces. Sometimes when the actor puts something on, in that minute, the character comes to life before your eyes. Then we’ll start talking about what the hair will look like and the shoes. It’s a really collaborative conversation and in this instance, it was between Quentin, Brad and myself.”

Once Upon A Time In Hollywood is in Australian cinemas now.

Zendaya And Tom Holland Reunite For New Project
Next page