On Ralph Lauren’s 50th Anniversary, Everything That Is Old Is (Reimagined And) New Again

SEPTEMBER 6, NEW YORK CITY: Just like Ralph Lauren’s home in Bedford, his head office at 650 Madison Ave in New York City is emblematic of both a library and a brawny club for well-to-do gentlemen to pour an expensive whiskey, on the rocks. Floor to ceiling highly-polished mahogany panelling is set against deep navy Tartan pillows and fringed lampshades. The lighting for the most part is dim, the concierge speaks quietly and leather accents and dense wall paintings are aplenty driving home the brand’s equestrian heritage.

GRAZIA is being given a private tour of the Polo show room on the eve of the label’s 50th anniversary show, a grand affair held at one of New York’s most iconic landmarks: Central Park’s Bethesda Terrace. The historic event will include a runway show (where Lauren’s latest women’s collection will show alongside Polo Ralph Lauren and Double RL), an immersive digital installation and an elegant seated dinner. And for the magnitude at which this dramatic event is operating, Polo Ralph Lauren’s CMO Brooke Allinson is very calm – and very chic – as she talks us through the evolution of the brand’s archival pieces.

Michael Ryder – formerly Céline’s ready-to-wear design director – joined the Ralph Lauren stable as the Polo designer in February this year. After spending nearly nine years designing under Phoebe Philo at the LVMH-owned Céline – and prior to that, he spent four years working under senior designer at Balenciaga Nicolas Ghesquiére – many tipped him to replace Philo when she left. Hedi Slimane nabbed this space. “This was [Michael’s] first season of easing him in and getting him warmed up,” Allinson says holding up a classic blue and white striped polo dress. “Michael definitely has a funky style for sure. He’ll take things like the t-shirt dress and cut tassels on it. He had beads on the ends of each tassel at one point but he took them off because they were getting a little heavy.” The man also ripped the sleeves off of the famous oxford cloth button-down shirt and tie-dyed four classics – a fleece, a cable sweater, polo and a t-shirt. “The tie dye is so relevant right now, we’re seeing so many versions of that from so many different people so for us to celebrate it in some of our most iconic pieces, it’s great,” says Allinson.

When it comes to denim, Polo are ready for an assault. Ryder has proposed a relaxed, oversized boyfriend cut with authentic, brighter rinses. The designer has gone back into the sports archives as well and pared some pieces with other collections – like an oxford shirt – and all of a sudden, it feels fresh and new and not as classic. “We’re working on new trainers and sneakers with Ryder to have athlesuire, fun utility vibe,” says Allinson.

Polo for women has a menswear-inspired sensibility about it and, as Allinson notes, that juxtaposition of playing with the feminine or the sweet is really important within the collection. “You’ll see a lot of flower pins around the room, Michael does sweet little nuances that,”. And nuances indeed that don’t necessarily include the pony emblem, a way of modernising the product offering. In North America, the Polo division of the brand isn’t heavily distributed. “We’re really trying to get Polo out there as a name but not always with the Pony,” says Allinson. “It’s so recognisable with the pony but there’s so many other ways to celebrate it, we have such a rich heritage of products and graphics that we can pull from. We’re going to have a lot of fun digging into the archives and celebrating that.”

GRAZIA was later taken to dinner in the evening at Ralph Lauren’s The Polo Bar on E 55th where the food is simple but the complicated part is getting in. A fine-dining establishment with all the oil paintings, lamps, leather and tartan fare, it’s (reportedly) usually mobbed with a perennial cavalcade of fashion folk. (Editor’s note: While the veal will fill a starved New York Fashion Week tummy, it’s the warm cheesy bread to begin that needs to devoured to be real).

The Stars Turn Out For Mr Lauren:

SEPTEMBER 7, NEW YORK CITY: When show day arrives the next day, so does the stampede of high-profile celebrities. Blake Lively, Anne Hathaway, Jessica Chastain, Kanye West and Oprah Winfrey who toasted Ralph Lauren at the dinner (a classic American menu and a nod to Lauren’s NYC restaurant) segment of the night. “The show was a bonus,” Oprah said. “The real reason we are all here is not for the show, it’s because of you. We are here to celebrate you, Ralph Lauren, and 50 years of you designing our dreams.”

“50 years of you stimulating our ambitions, 50 years of you creating a sense of value, that brought goodness and wholesomeness to glamour. Your story exalts our collective story” she continued. “That fact that you were a boy from the Bronx, who was able to have an idea about big ties and smart enough not to let Bloomingdale’s take it, and take that ideas of big ties and create a gigantic company. Your work these past 50 years has told the story of lives, the lives that we live and the lives that we aspire to,” she said. “You care about the things that matter. You care about home. You care about freedom. You care about integrity.”

More than 150 models from different generations and backgrounds – some well known back in the day, others of the moment now – took took tot he runway earlier in the evening. Even dogs (which seems to be a little sub-theme happening at NYFW this year). “For my 50th anniversary, I wanted to create and share a runway experience that was deeply personal and a summation of the style I’ve always believed in: personal, authentic, and forever, in a place so quintessentially New York and so special to me—Central Park,” said Lauren.

Adjacent to the runway was an immersive digital installation that showcased the brand’s 50 year history. Founded in 1967 – and with no formal training – Lauren opened a tie shop, tonight’s monolithic LED sculptures, video cuts honoured moments like this that saw the brand survive the ebbs and flows of not only the fashion industry but the US stock market. Guest could also step into “50 Years of Reflection” – within the mirrored box in the park – where they were transported into the cinematic World of Ralph Lauren as more than 400 images and video from the brand’s prolific archives moved across the walls.

Tonight’s show proved the heritage of this brand is so engrained in the American fashion tapestry that while every label relies on modernisation, looking forward Ryder is the perfect pick to preserve this history and push the Polo women’s division forward. And in a fickle world, one thing’s for certain: there’ll always be a Ralph Lauren tartan cushion. 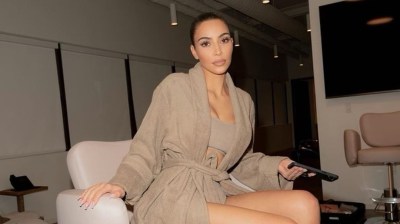