At Omnia Bali, a day club for all seasons

Groundbreaking design is as much a star of this must-visit venue as the world-class performances, exquisite food and Bali's best sunsets 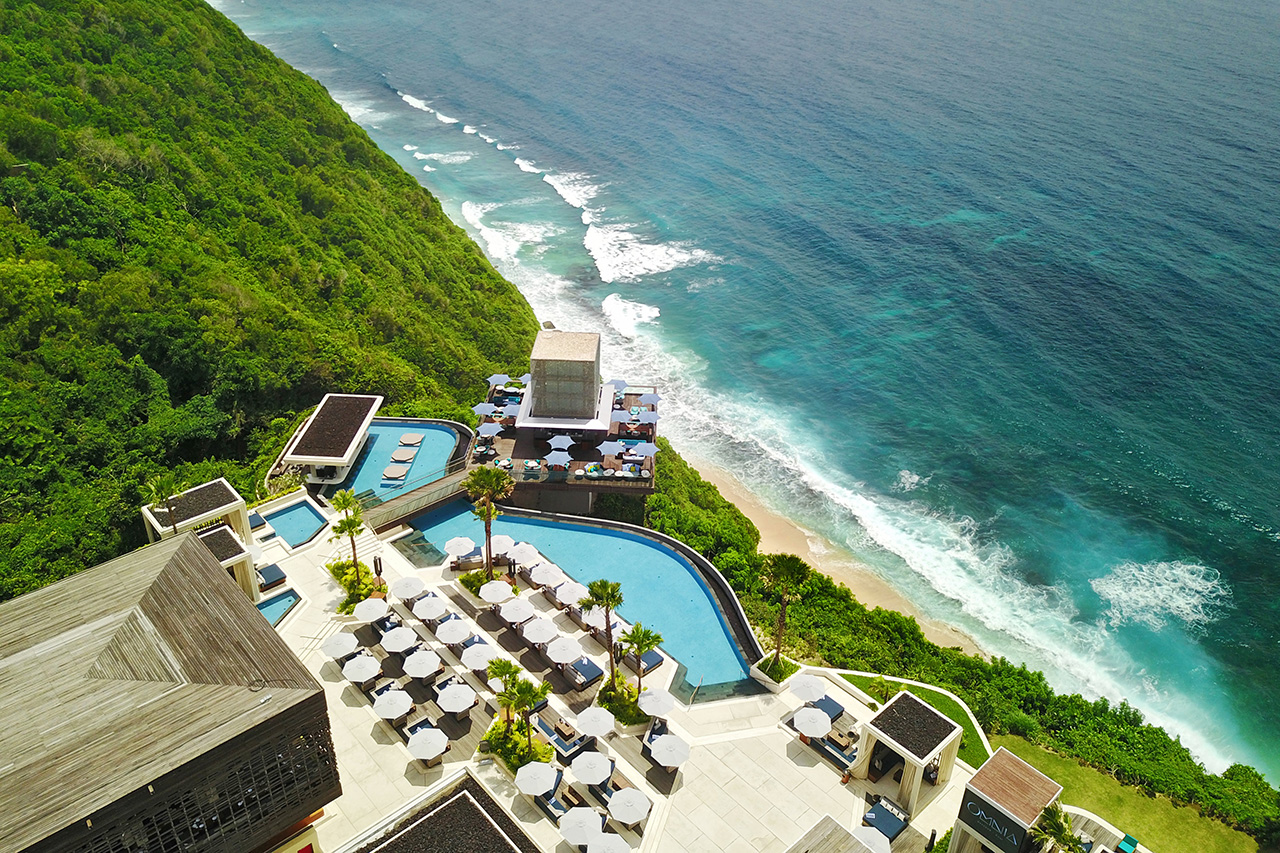 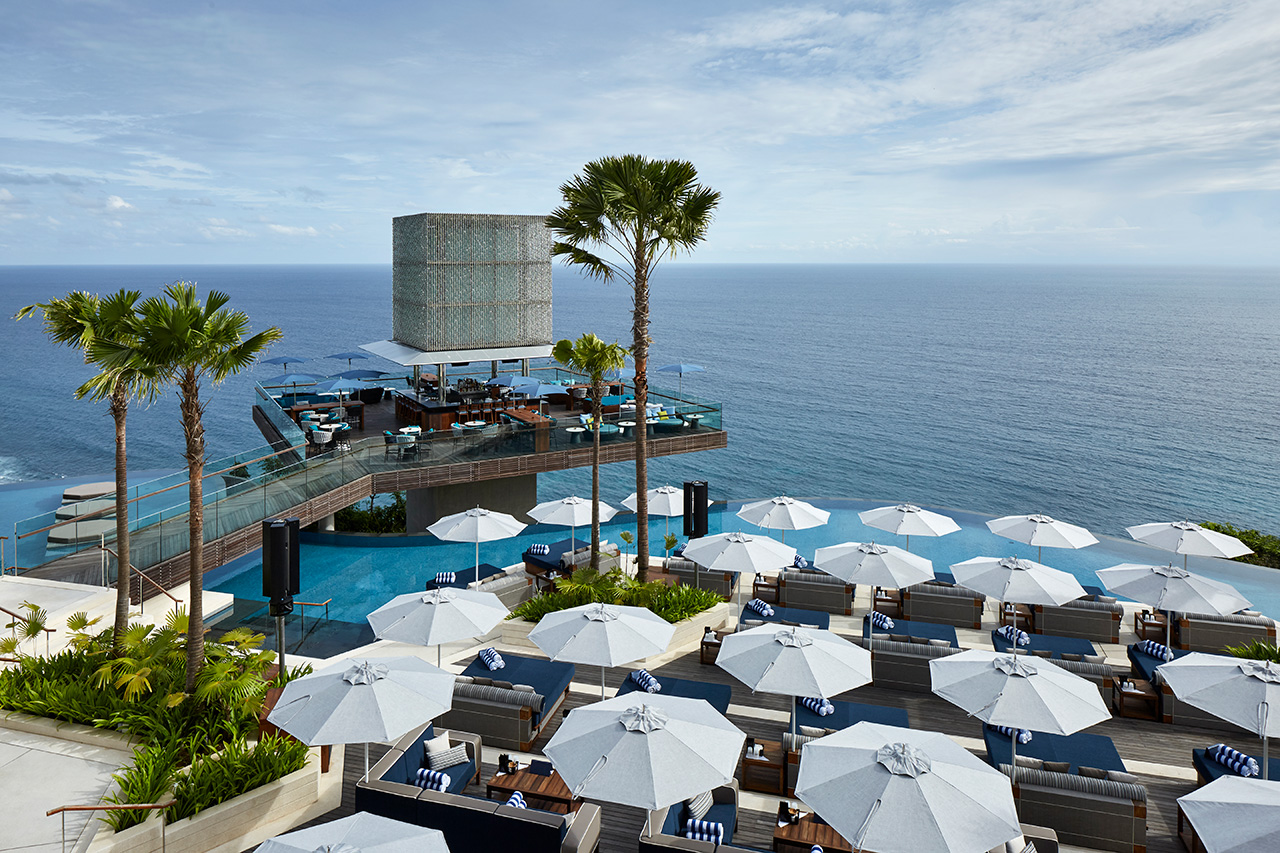 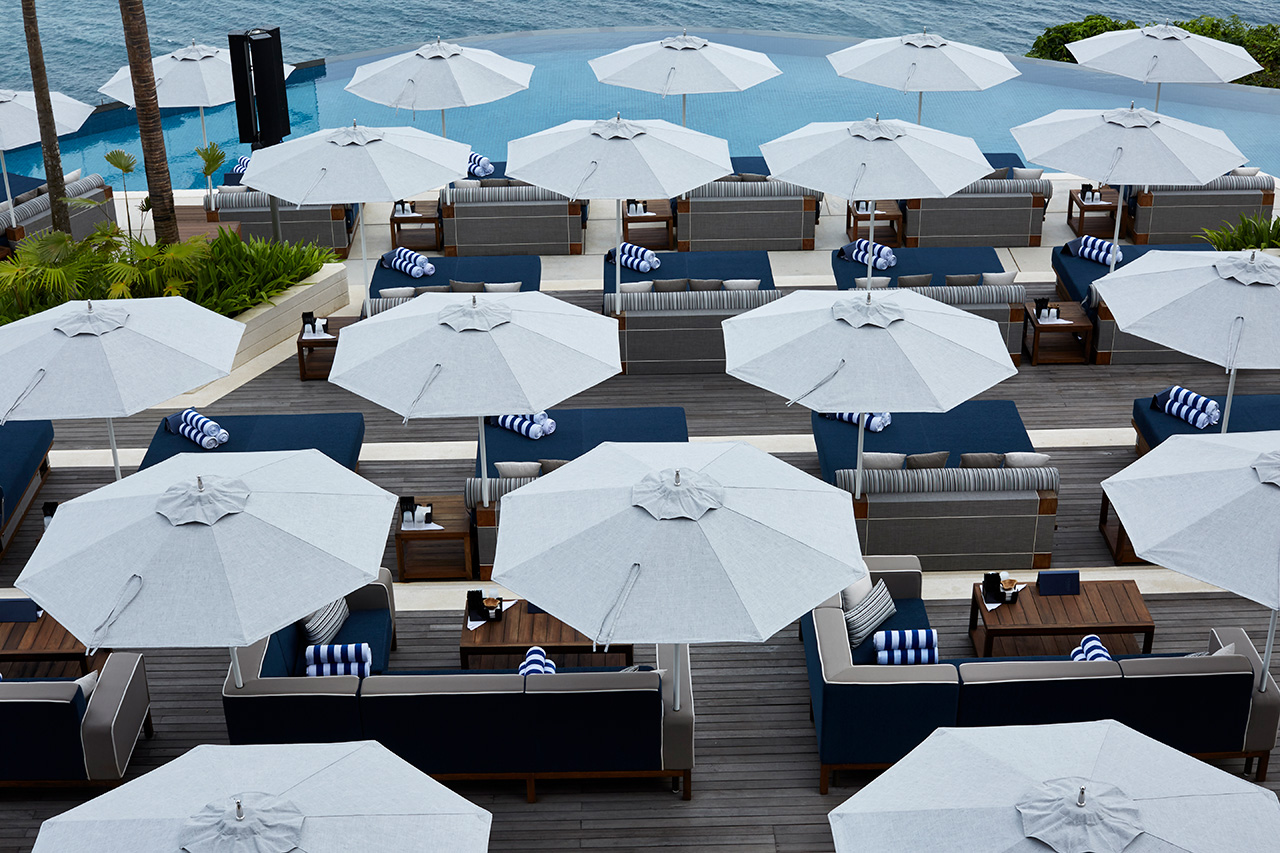 Poolside daybeds overlook an infinity pool and the Indian Ocean beyond 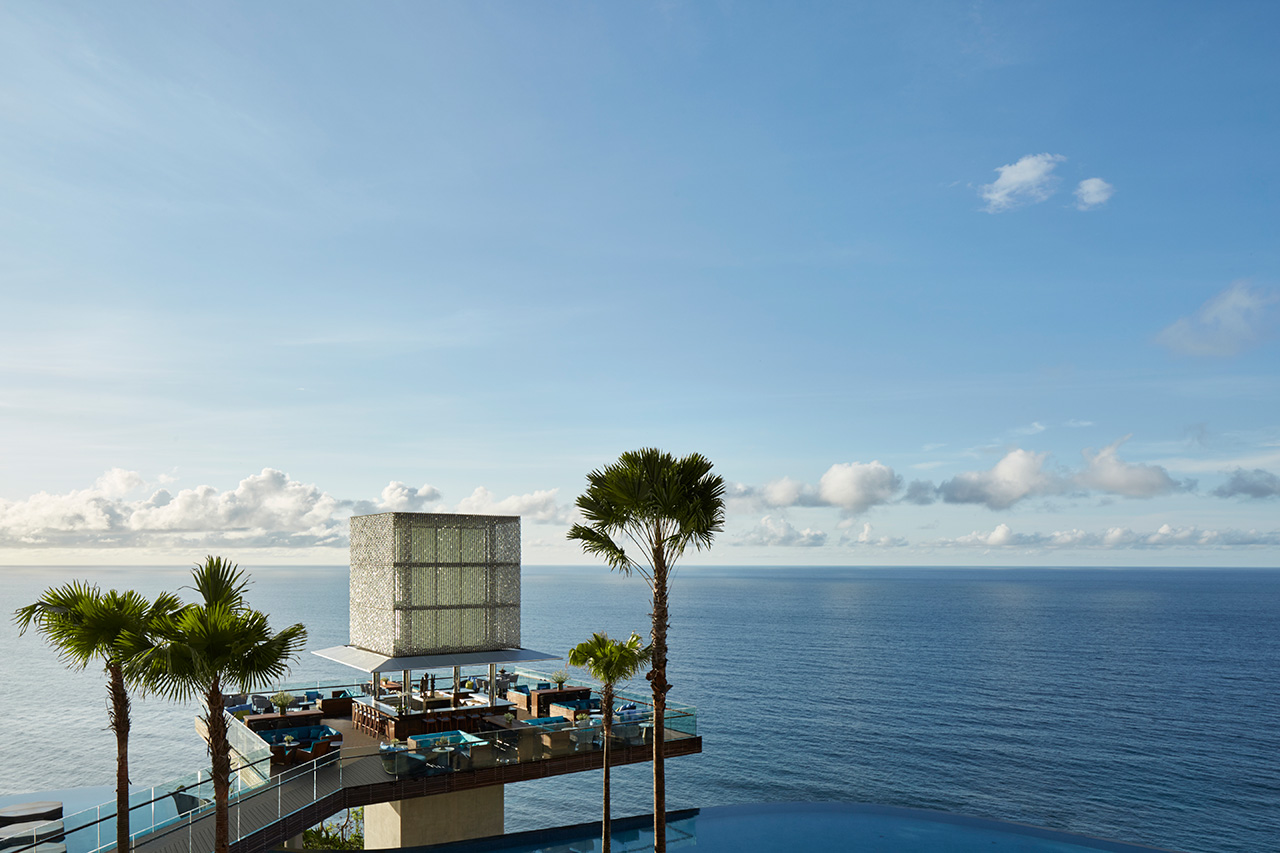 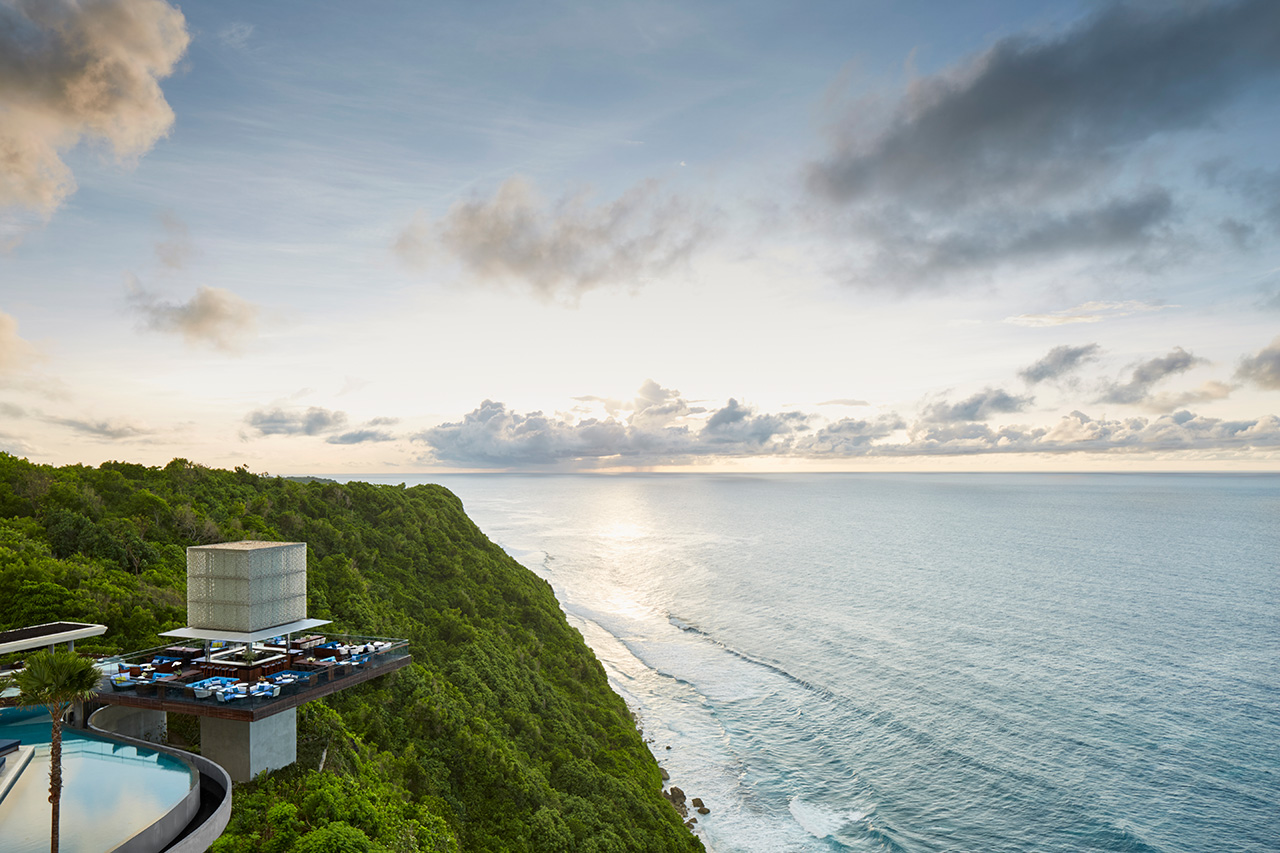 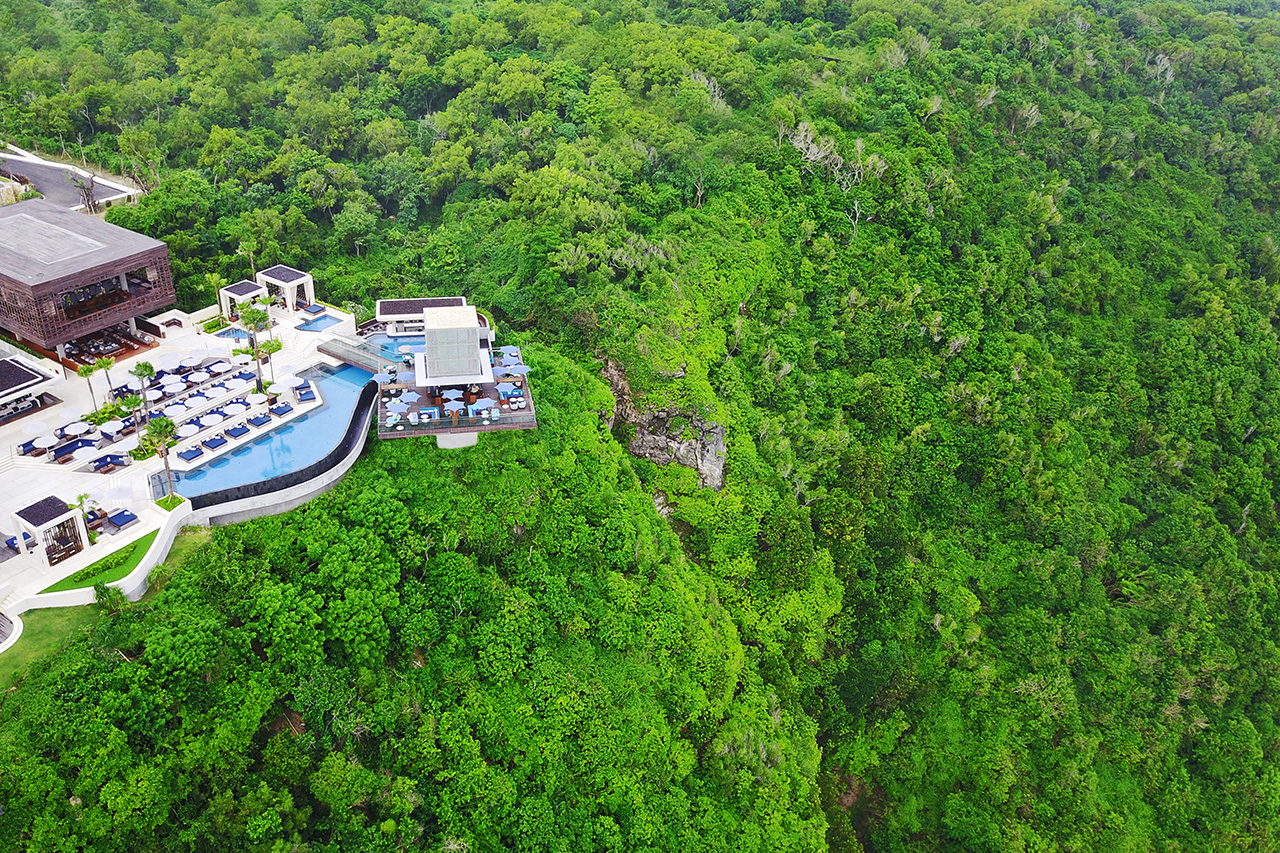 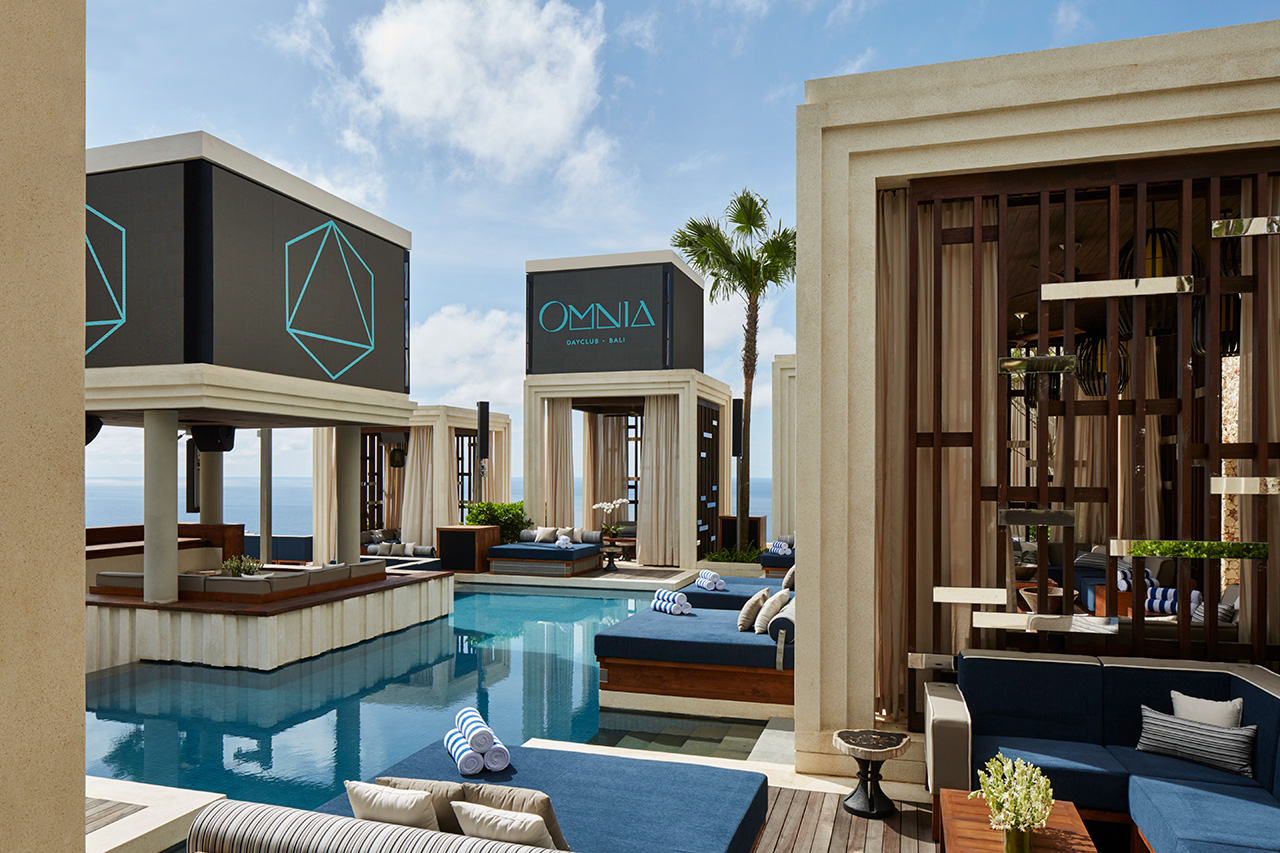 A series of VIP Bungalows enjoy access to a private plunge pool, and close proximity to the DJ booth 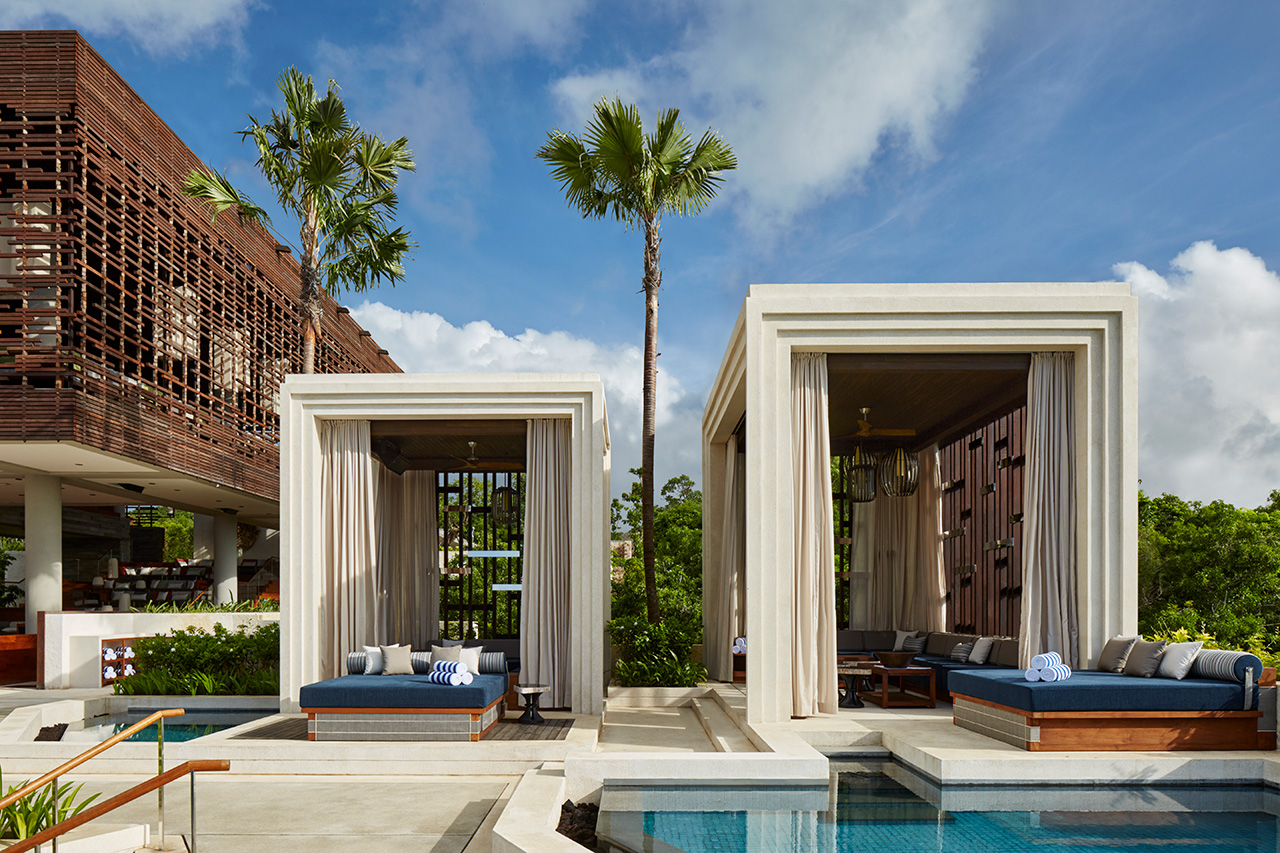 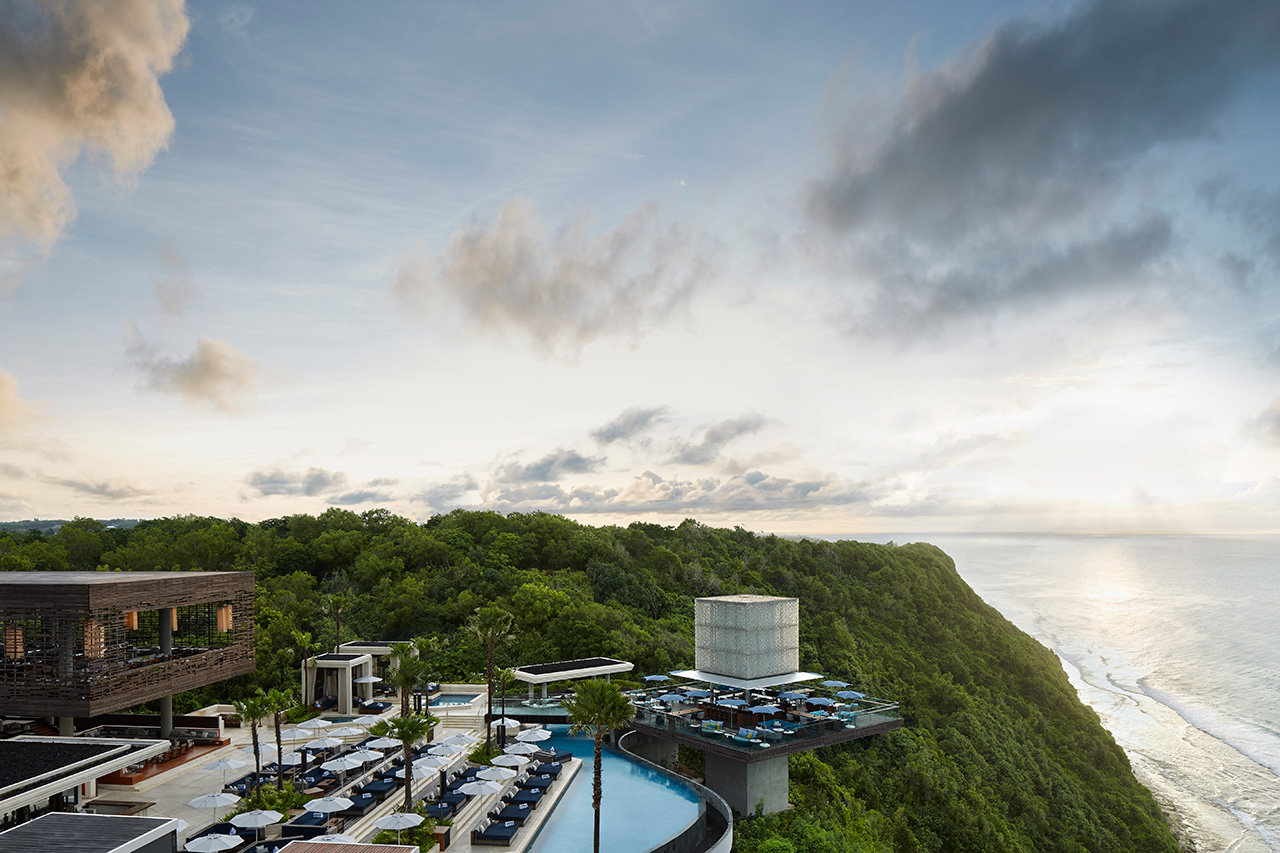 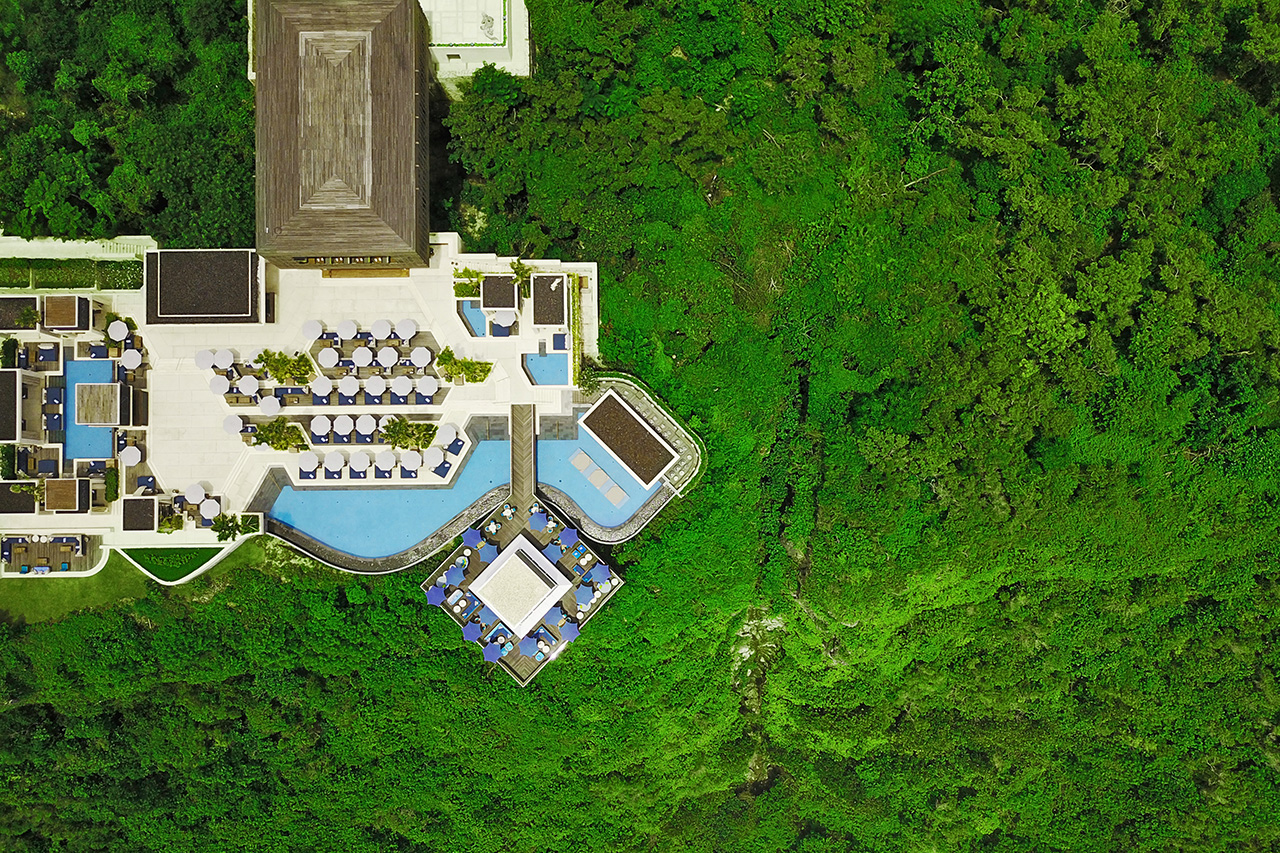 On the limestone cliffs of the Bukit Peninsula in Uluwatu, the OMNIA Dayclub cuts a striking form 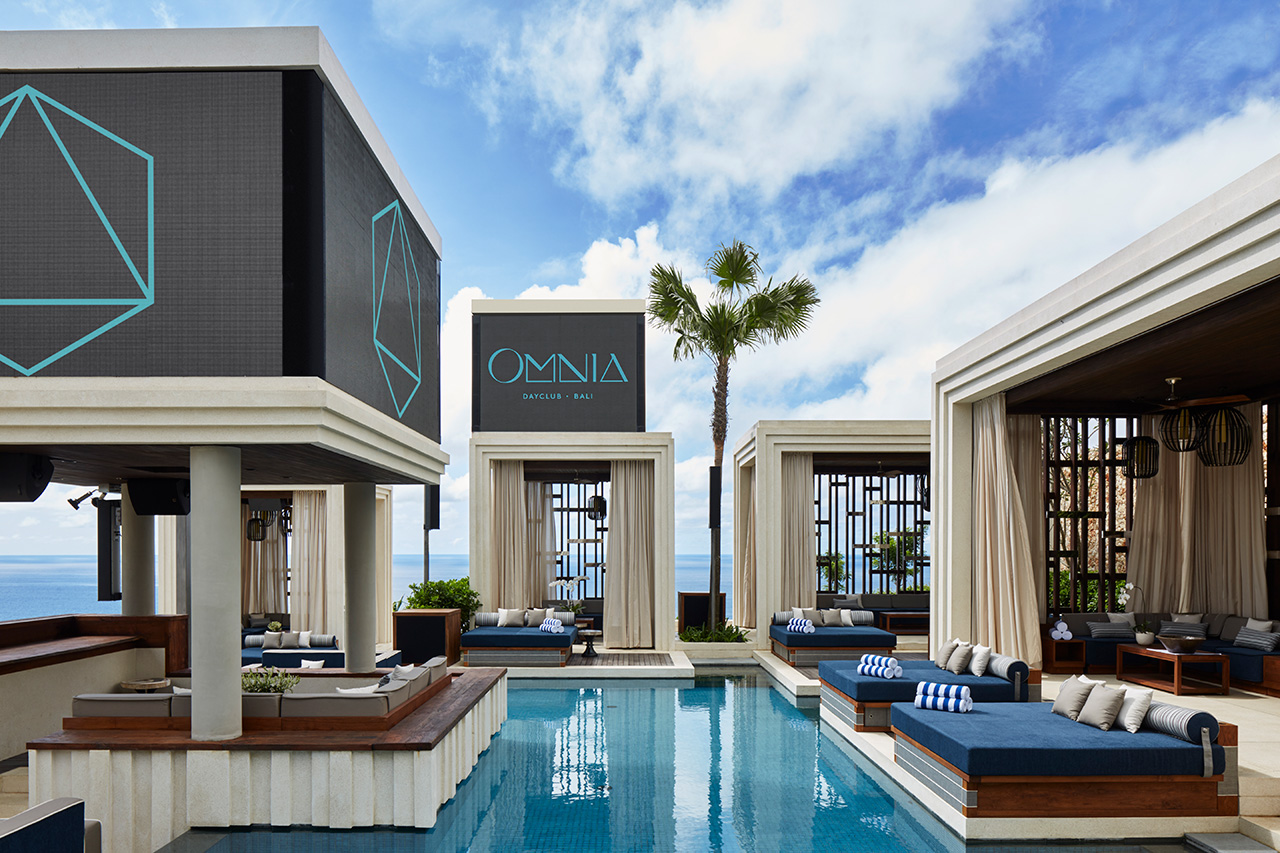 To the left, a DJ booth where the world's top nightlife acts will hold court over OMNIA patrons, day and night

On a winding coastal road in Uluwatu, on Bali’s southernmost Bukit peninsula, a wooden box rises two storeys above the dense, labyrinthine forest that encroaches on all sides. Nearby, a second cubic structure – this one clad in thousands of glass beads and mirrored stainless steel – juts out over the limestone clifftops at the end of a cantilevered deck, stopping just short of the edge of the precipice and all that awaits below. The waning light of the afternoon tinges the wooden structure’s porous facade — iron wood slats interwoven at right angles to let in the air and light, while still shielding the interior — a golden brown. But it’s the second show stopping structure that invariably pulls focus.

The glass cube looks as though it could burst into flame at any moment, its custom made glass beads catching and refracting the natural and artificial light in impossible configurations – sunset and LED not competing for attention, but working in tandem to produce something verging on transcendent when the timing is just right.

This is the scene at Omnia Bali, the latest property opened by the global hospitality magnate Hakkasan Group, whose world class luxury entertainment and hospitality outposts are stationed across the globe in the United States, Europe, the Middle East, Asia and, as of this year, on the island of Bali. The flagship venue in the Omnia stable was opened in Las Vegas in 2015, and fast established for itself a reputation as one of the world’s premier nightclubs not only for its discerning roster of talent that have graced its decks, but because of the considered approach to design that informs the space, and ultimately, your experience of it in ways that only later reveal their sleight of hand.

Omnia Bali, however, is the first venue of its kind for the Hakkasan Group. The palatial space serves as both day and nightclub, bar and restaurant, a place of relaxation and riotous revelry. It’s the emphatic period at the tail end of the island’s exclamation mark. Straddling all the worlds that Bali – not to mention the Omnia brand – has come to represent in one fell swoop is no enviable task for one venue and those charged with seeing it from conception to grand opening, but it was one that the architectural firms WOHA, a Singapore-based practice, and Rockwell Group, a New York-based firm, relished together nonetheless.

Before earth could be broken on the project, the property’s design had already been dictated in part by far less malleable elements than glass, wood and steel. First amongst them, the contours of that same earth that is veined with limestone underfoot.

“The cliff-side location is truly one of a kind”, says Shawn Sullivan, partner in the Rockwell Group, an interdisciplinary firm that prides itself on conflating the worlds of theatre and performance within their architectural designs (theatre, in this case, is meant quite literally; Rockwell has been responsible for creating sets for Broadway productions of shows like Kinky Boots, and created the set design for the infamous marionette motion picture, Team America).

This was not the first time the Rockwell Group has been charged with realising the Omnia brand in the form of a built environment. In the past, the firm has created design concepts for Omnia venues in Las Vegas, San Diego and in Los Cabos, the resort town at the southern tip of Mexico’s Baja California Peninsula. In each instance, the design is site specific in the truest sense of the term. Where the Las Vegas concept, located in the former Pure Nightclub space at Caesars Palace, reimagined the opulent opera boxes of gilded European concert halls through the lens of state-of-the-art technology, the Uluwatu site necessitated an entirely different tack – one that “integrates the nuances of the natural rock formations to create a collection of dining and lounging experiences that are both social and have heroic views of the ocean,” says Sullivan. While Rockwell were tasked with resolving elements like the furniture, interior furnishings, VIP bungalows and cabanas, WOHA took the lead on initial site planning, and the designs for the Cube and adjoining bar spaces.

“For us, Omnia Day Club is integrated visually with Alila Villas Uluwatu, which it shares the clifftop with, though with the volume turned all the way up,” says Richard Hassell, who co-founded WOHA in 1994. “The cantilever is more dramatic, the Cube shimmers in the sun. It’s like Alila Villas Uluwatu dressed up for a night out,” says Hassell, referencing the neighbouring resort, which WOHA designed and supervised the construction of between 2003 and 2009.

“[Omnia is] more high-energy,” reasons Hassel. “Where Alila Villas ‘relaxes’ into the landscape, Omnia flies out over it.”

Stylistically, the two share an aesthetic sensibility that combines elements of traditional Balinese pavilion architecture and farmers’ terraces with cues from the rural, Savannah landscapes and modern dynamics of space and volume. The latter, of course, was another element that dictated the dayclub’s design and construction before work could begin in earnest – in quite a literal sense.

“The [sound] system was mapped out using computer acoustic modelling in advance, before any concrete was poured, so we knew exactly the effect on the surrounding area at different levels of operation,” says James Algate, Vice President of Entertainment at the Hakkasan Group. To replicate the technical mastery enjoyed by other Omnia venues, Hakkasan opted for an Audiotek sound system created by two manufacturers – Renkus-Heinz out of California, and L’Acoustics from France – to deliver an aural experience nonpareil, one that is par for the course with the group’s venues, regardless of the competing elements of their respective settings. To minimise disturbance to the adjacent resort, the Renkus-Heinz IC-LIVE system that was installed at Omnia Bali is capable of shaping and projecting multiple ‘beams of sound’ which can be guided to deliver sound exactly where it needs to be, in the exact moment it’s required. “Using this, we can run a full club-level system that can barely be heard outside of the venue,” adds Algate.

The resulting venue, which took two and a half years to complete, is the direct expression of contemporary design and technology enriched with references to local Balinese craftsmanship and culture. According to Hassel, the owner of the property has been purchasing “interesting artwork” to provide a creative accent to the venue’s interiors – for instance, “a Komodo dragon craved from an entire tree trunk”, as well as contemporary and antique Indonesian art, with pieces by the Balinese sculptor I Made Jojol.

The sweeping outdoor areas resembles a warren of public spaces and private bungalows, along with public and private plunge pools, which offer the only visual disruption to the terrace’s exacting lines carved from a neutral terrazzo flecked with gold and soft blue accents. Inside, the impossibly bright lounge and restaurant spaces are adorned with little but the shadows of the day’s moving light across the open-air, latticed space. Very few corners of the establishment are left wanting for the kind of panoramic views of the Indian Ocean that thousands have travelled here from all corners of the globe for.

The monolithic space of Sake no Hana, the exterior of which is constructed of little more than recycled iron wood, echoes the elevated design of the Sunset Cabana at Alila Villas Uluwatu. Taking the broad wooden stairs, guests ascend from the first-floor lounge, with its low, modernist banquettes, to the airy second-floor restaurant – both spaces illuminated by the sun coming in through its barely-there walls, which have been constructed from telegraph poles and repurposed railway sleepers.

That there is such a strong emphasis on using recycled materials drawn from the immediate surrounds is both a direct expression of WOHA’s predilection for instilling their projects with environmentally and socially responsible principles and a sustainable ethos, as well as the embodiment of Sake No Hana’s mission where its food and beverage options are concerned (it should also come as no surprise that plastic straws and cups do not appear anywhere in the venue in favour of biodegradable options).

“Sake no Hana is all about [a] focus on ingredients and treating them with respect; everything plucked, picked, harvested and served just at the right time,” says Gert Kopera, VP of Global Restaurants at Hakkasan Group, invoking the Japanese edict of ‘Shun’ as the guiding ethos behind each element of the restaurant. “Shun describes the moment of perfection for an ingredient: when it’s at its ripest and most delicious,” he continues. “It’s guided by the principle of seasonality, but going that one step further. It’s not just about a season, but considers the very moment. It takes the saying ‘timing is everything’ to a whole new level.” The principle is discerned most clearly in the work of Hideki Hiwatashi, Head Chef at Sake no Hana, particularly in dishes like the Hamachi Namawasabi: finely sliced fresh hamachi, (a yellow tail tuna) with freshly grated wasabi and a black truffle ponzu sauce.

“Whenever I am, I create dishes following the principles of my kaiseki training, using the best local, seasonal ingredients and showcasing their natural flavours with subtle seasonings and complimentary presentation that feeds all the senses,” says Hiwatashi. “This is the embodiment of shun. And it is more important than a concept, because it is a way of living, a way of expressing our wonder for the world. We honour it.”