It seems nothing can bring an estranged couple together more than a scathing Daily Mail article. Overnight Olivia Wilde and Jason Sudeikis released a joint statement against their children’s former nanny for “false and scurrilous accusations” in a recent interview. The woman who remained anonymous for the interview stopped working for the couple in February 2021 and recalled the breakdown of Wilde and Sudeikis’ marriage.

The statement read: “As parents, it is incredibly upsetting to learn that a former nanny of our two young children would choose to make such false and scurrilous accusations about us publicly.

“Her now 18 month long campaign of harassing us, as well as loved ones, close friends and colleagues, has reached its unfortunate apex. We will continue to focus on raising and protecting our children with the sincere hope that she will now choose to leave our family alone.“

Speaking to the outlet the nanny first noted that she never witnessed any problems between the couple in the first three years of her employment and that the breakdown was caused when Sudeikis discovered Wilde’s affair with Harry Styles in late 2020. The filmmaker vehemently denied rumours she cheated on her former husband in an interview with Vanity Fair, claiming she split with the Ted Lasso actor in early 2020, before filming for Don’t Worry Darling had begun.

According to the woman, Wilde actually split with Sudeikis in November 2020 months after she met Styles. Sudeikis reportedly discovered details of her relationship with the former One Direction star via messages on an old Apple Watch.

“On the Monday morning [of] Nov. 9, when I came back from a weekend off, [Jason] was crying a lot, crying and crying. I didn’t know what had happened at all,” the nanny claimed. “After I’d got the kids ready, Jason came upstairs and was having some coffee. He was crying and a mess, saying, ‘She left us. She left us!’”

The nanny recalled an incident where Sudeikis laid underneath Wilde’s car to prevent her from leaving to see Styles. The actor was allegedly furious that Wilde was making Styles a salad “with her special dressing” in front of him.

Wilde agreed to go to couple’s therapy but allegedly wasn’t taking it “serious”. During the breakdown of their relationship the nanny claimed Sudeikis nightly drinking habit was getting worse. The nanny travelled with Sudeikis and his two children to London in December 2020 where he was filming the next season of Ted Lasso.

The nanny claims she was later fired while in the UK but a representative for Wilde says she resigned and has been unable to obtain for severance pay.

Earlier this year at CinemaCon, Wilde was handed custody papers for her two children, Otis, eight, and Daisy, six. Sudeikis is not the only one to be outraged by the alleged scandal. Florence Pugh reportedly distanced herself from Don’t Worry Darling after she was disgusted by the affair. 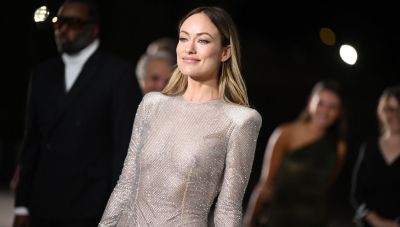