Girl of the moment Olivia Rodrigo is giving her fans what they want, releasing the music video for her song ‘Brutal’ overnight, complete with all of the teenage angst and Y2K fashion moments you’d expect from the 18-year-old pop star.

The three-minute-long video, directed by Petra Collins, shows Rodrigo as a frustrated teenage girl, desperate for life after high school. In the clip, Rodrigo, who has cemented herself as one of fashion’s new favourite celebrities since she burst onto the scene earlier this year, wears a plethora of looks, including plaid mini skirts, Delia’s-esque baby tees and metallic two-pieces.

Styled by Chloe and Chenelle Delgadillo, as well as Ron Hartleben, Rodrigo, whose usual wardrobe is made up of early aughts and Y2K style, added a punk twist to the trend, channelling the likes of Avril Lavigne with her gothic tattoo chokers, fishnets and vintage Vivienne Westwood.

In one shot, Rodrigo paid tribute to the ultimate pop princess who came before her, wearing the same Roberto Cavalli corset dress Britney Spears first wore in 2003. Fashion writer Evan Ross Katz picked up on Rodrigo’s quiet statement of support, posting side-by-side photos of the pair wearing the dress on Instagram:

A few weeks ago, Rodrigo spoke out in support of Spears, calling the singer’s conservatorship battle “horrific.”

Speaking with GQ, Rodrigo said, “The Britney stuff was just horrific, and I’ve been following it very closely. I think it’s just so awful. I think, as an industry, people are getting better at not taking advantage of and manipulating and bullying young women. But it’s still so apparent, and I witness that too.”

“Not near at the level that Britney has, obviously. I think that’s an important paradigm that I hope that we’ll be able to break in the coming generations. I’ve definitely seen corporate dollars be prioritized over people’s mental health.”

“That’s always been something that I’ve been really conscious of in my own career, and I’m really lucky I’m surrounded by people who are conscious of that and conscious of my mental health being the most important thing. You can’t make art and have a good career if you’re not there.” 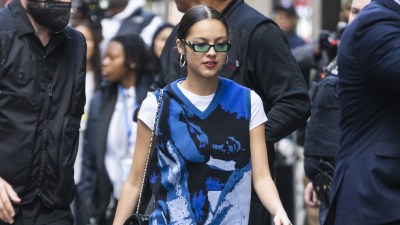