At the opening of the inaugural NGV Triennial, Ron Mueck achieves critical mass

It’s not often that an exhibition leaves an indelible mark on you. Ron Mueck’s 2013 solo show at Paris’ Fondation Cartier pour l’art contemporain, my first experience of viewing the sculptor’s work in the flesh, was one such exhibition – the kind that never leaves you.

Mueck has made a considerable name for himself his painstakingly crafted and extraordinarily verisimilar human studies. Each is not merely a figurative exercise in reproducing reality, Mueck distorts size and scale, contorting form and face alike to make visible a psychology within. His works often address the cycles of life – birth and death in particular, but also the unassuming moments in between – and, even when engaging in the most banal activities, his contemplative figures are entirely transcendent.

Today, at the opening of the inaugural NGV Triennial, a free exhibition at the NGV International that features the work of 60 artists and designers from more than 30 countries around the world, Mueck’s largest work to date Mass 2017) has been unveiled. The work is comprised of one hundred large-scale sculptures of the human skull that the Australian-born artist has rendered in resin. As you may well have gathered by now, Mass is rather extraordinary.

The reclusive artist was commissioned by the NGV to create the work, which is redolent of both the Paris catacombs and mass graves found in war zones in Cambodia, Rwanda, Srebrenica or Iraq, as well as invoking the skull’s potent history as a motif throughout the entire canon of Western art. The installation is situated within the historical Dutch galleries as a way of compounding those contextual resonances; in the genre of Dutch still life paintings, the motif was often deployed as a symbol of mortality – doubling down on the more implicit meaning behind the inclusion of flowers and food.

Based in the United Kingdom since 1986, Mueck, who began his career under Jim Henson as a special effects worker creating photo-realistic props and animatronics, is also featured prominently in Hyperreal, a stunning survey of artists working within the hyperrealist genre on now at the National Gallery of Australia in Canberra. Both Hyperreal and the Triennial are not to be missed. More information about the latter is available here. 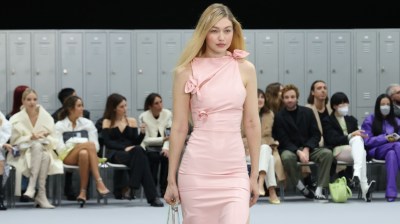