The vision on Cardi B exiting the Harper’s Bazaar Icons Party during New York Fashion Week in a ripped Dolce and Gabbana dress with a protruding boulder of a bump on her forehead and one shoe is still etched in my mind. It was just so chic. Let’s revisit:

The rapper, 25, had of course just got into a physical alternation with fellow rapper Nicki Minaj, 35. Cardi B allegedly started lashing out after Minaj reportedly talked negatively about her parenting skills. Now, the higher than heaven Naomi Campbell has weighed in telling Andy Cohan she’s disappointed in the women. In true Campbell-style, she firstly noted there was an absentee of actual wunderkinds at the party – Sorry, Harpers Bazaar staff, we’re sure you worked extremely hard. “It was called an icon party, but there were no icons there,” Campbell, 48, said on Watch What Happens Live with Andy Cohen. “Kate [Moss] and I were at home on the couch watching TV.”

When asked about Cardi B and Minaj, Campbell – who is famously hot-tempered – said she hated seeing women fight one another. “I was disappointed. I don’t want to see women of colour fight. I don’t want to see women fight period,” she said. “Not there, not that. It’s all music. There’s no division of music. Music’s for everybody, there’s no discrimination, so I felt very disappointed.”

Campbell, a huge mentor to Gigi and Bella Hadid, doesn’t seem to have the same relationship with Kendall Jenner. Last month, Jenner made a comment about how she’ll never be that girl who does “30 shows a season or whatever the f**k those girls do. More power to ‘em.” When asked about Jenner’s work ethic, Campbell replied, “Next question.” Enough said. 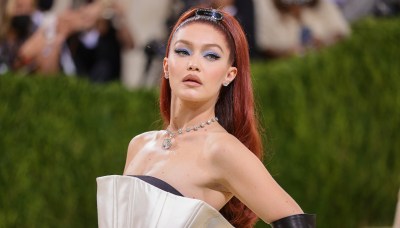