With unparalleled panoramic views across the caldera and Aegean sea and Cycladic-inspired architecture, Mystique belongs at the very top of your must-visit list 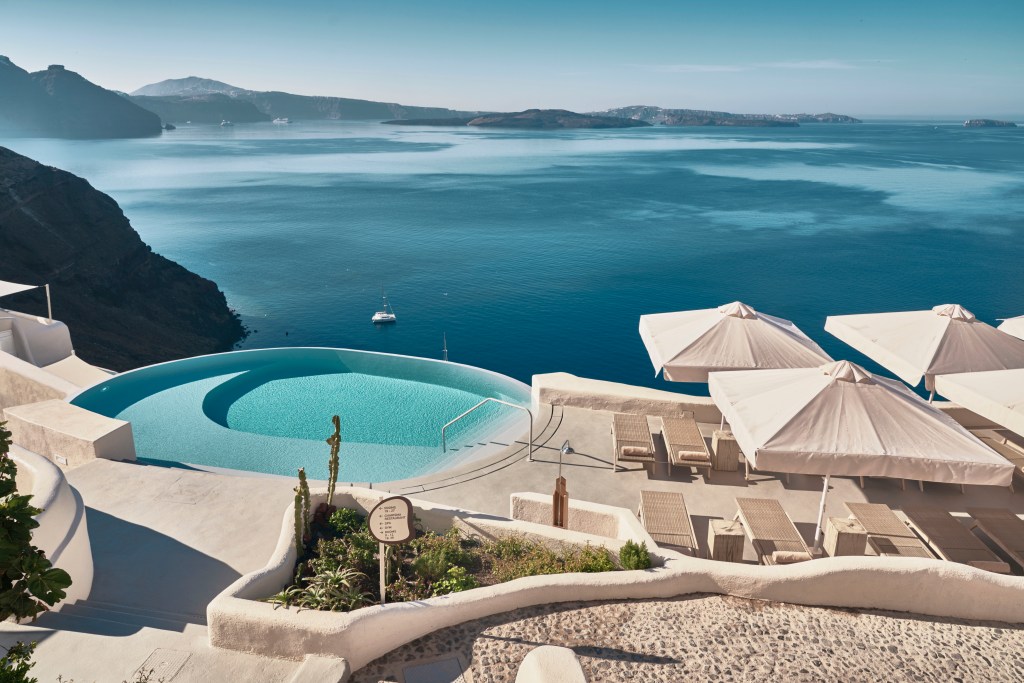 When trying to pick an island in Greece to spend your European vacation on, the options can be overwhelming. There’s Mykonos for those who like to party, Milos for ATV adventures to small, secluded beaches and Crete for all the ancient ruins you missed if you skip through Athens en route. But despite the long list, there’s one island that never seems to go out of style, nor drop off inclusions in lists detailing the most beautiful destinations in the world: Santorini. Those who have visited the island before, known for being home to one of the world’s best sunsets, will know that the most breathtaking area is that of Oia, at the island’s top peak. There, Mystique Hotel is found sitting in the cliff tops, overlooking the Aegean sea.

Santorini is frequently compared to that of Italy’s Amalfi Coast, with buildings built directly into the cliff faces, which add to the beauty rather than detract from it. Perhaps the most beautiful of the lot is the boutique hotel, Mystique, which, since opening its doors in 2007, has been frequented by honeymooners and those looking for relaxed luxury. Found down winding steps off Oia’s main road, Mystique provides unparalleled panoramic views across the caldera and Aegean sea, with Cycladic-inspired architecture throughout which sees gentle curves and sculpted arches dressed in a muted colour palette. Every inch of Mystique looks like a perfectly planned Instagram lifestyle photo, and it’s easy to see why travellers spend hours trying to capture photos from the road, which you wake up to every morning from your hotel bed: 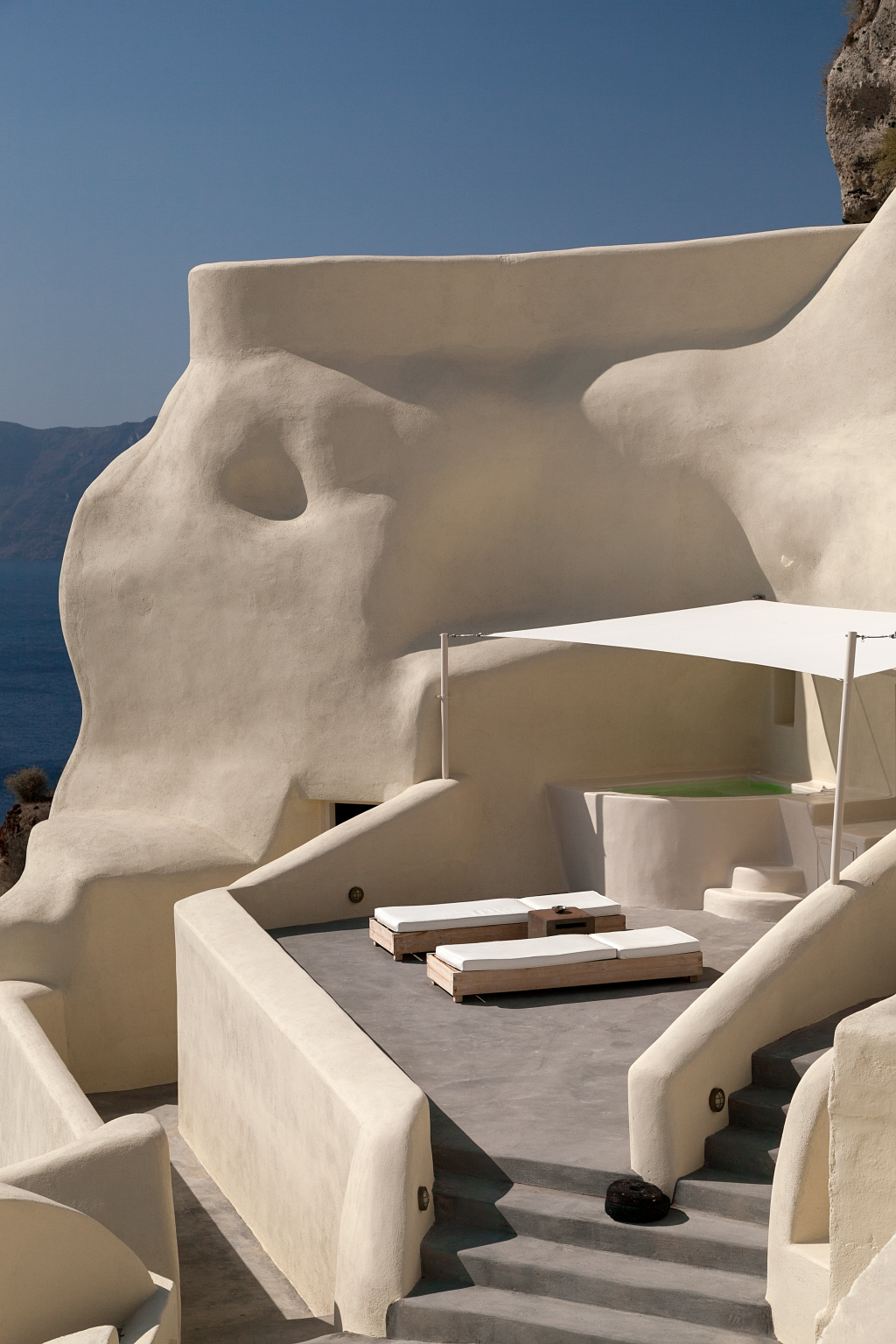 Prior to my trip, I checked the hotel’s account to find various friends, both in the UK and Australia, already followed its Instagram—no doubt mentally adding Mystique to their post-pandemic must-visit lists. But despite the gorgeous setting, Mystique isn’t a place where you’ll find influencers draped around every corner. Instead, there are honeymooners, couples taking an adults-only holiday, and a few families with very lucky teens tagging along.

Upon arrival, staff are attentive and welcoming, helping to bring bags down the winding hotel steps to your room and offering you drinks and snacks during check-in. The traditional cave-style villas and suites feature hot tubs and private terraces, each with its own sun loungers. The rooms are rustic and are left bare, as is the rest of the hotel—making it feel more authentic and unembellished (in the best way) than the regular five-star ritzy accommodation. Some rooms even come with their own private plunge pools (or infinity pool if you splash out for the Mystery Room) and fitness centres.

If you don’t opt for that opulence, Mystique has two more than adequate swimming spots you can lounge beside—the main infinity pool sits in the hotel’s centre beside its Charisma Restaurant, where breakfast and lunch is served, and comes complete with sun loungers and its own bar for poolside cocktails. There’s also the Captain’s Lounge, a smaller and quieter adults-only pool nearby.

With other infinity pools, there’s often a limit to how much of the background is blue, but at Mystique you can see unparalleled views from the sea from almost every angle, including from the gym’s treadmill on a pre-breakfast morning run—so much so you can sometimes forget you’re not looking at a green screen.

There are other hotels in the area with a similar backdrop, but none land quite like Mystique. It’s hard to describe exactly why. It’s beautiful, yes, the staff are wonderful, and the rooms are comfortable and chic. But it’s more than that. Mystique makes you feel so relaxed that it’s easy to forget the time—and actually sign out of those work emails you continue to feverishly check, despite being on holiday. Its vibe is one of laid-back luxury, which many similar hotels fail to nail in quite the same way. Santorini is a big island and if you want to explore, it’s recommended to hire a jeep for your stay, however, after checking into Mystique, we decided to cancel all plans to visit the popular red and black beaches, and instead parked up poolside with an Aperol Spritz in one hand and a book in the other. After all, holidays are for relaxing, and there’s no better place to relax than right beside an infinity pool.

Mystique is perfectly located near all of the shops, tavernas and dreamy streets of Oia, which meant we managed to pop out for a few afternoon walks, including to pick up gyros at Pitogyros (a famous traditional grill house just a five-minute walk from the hotel), and to watch the sunset at Ammoudi bay. After consulting reception on the best dinner spot, we opted for Katina Fish Tavern, but a tip: in peak season, you’ll need to book a dinner table at least two days in advance because the area provides the best views of the sunset on the island. You’ll also need to wear shoes fit for a lot of steps down and back up, unless you want to pay €10 for a donkey ride back to the top of Oia.

After a steep walk back to the hotel to burn off those calories earned through too many croissants at breakfast, the best place to spend the next few hours is the hotel’s cave-like spa, which has two treatment rooms, where guests can be pampered with a therapeutic massage, cleansing scrub or rejuvenating facial. Signature treatments include the Santorini Lava Touch—a body scrub, body wrap and full body massage—and Under the Sun, a facial meets massage combo. For peak wellness, Mystique has partnered with OPO app and has created a personalised immersive meditation experience, which guests of Mystique can access after booking their stay. There are two on-site restaurants at Mystique and a hidden 150-year-old wine cellar. The aforementioned Charisma Restaurant, where breakfast is served poolside—fresh fruit options were a highlight, including a caramelised banana split with fresh berries, yoghurt, grain-free granola and cacao nibs, and a goji berry dish with yoghurt and chocolate tahini, as was the still-oven warm bread basket.

The Lure Restaurant, helmed by renowned French Chef Olivier Campanha, who has experience leading many Michelin-starred restaurants, has a Greek and Mediterranean menu and is open for both cocktails and dinner. The location—at the top of the hotel—provides breathtaking views across the sea and white landscape of Oia, with one private balcony for those who want extra privacy and romance. Lobster risotto and langoustine tartare were menu highlights, as was the citrus and coriander pavlova for dessert (especially for a native New Zealander). 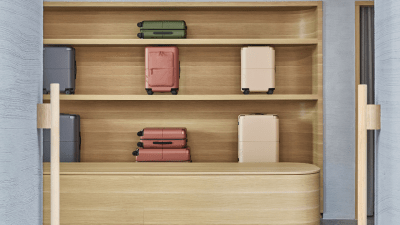 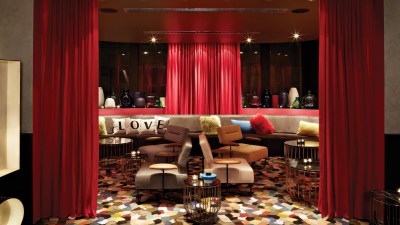