This year’s most buzz-worthy celebrity memoirs

We love nothing more than a good celebrity inside-tale, but these four star memoirs in particular have us counting down the days

There comes a time in every digital native’s life when another listicle about your favourite celebrity’s latest hijinks or questionable snafu no longer cuts it. Enter the long read celebrity memoir – and enter this listicle. Since Tina Fey set the standard in 2008 for lucrative book deals that paid handsomely (Fey received a reported $8.2 million for Bossypants), the demand for biographies (ostensibly) written by stars with serious pop culture cache has breathed new life into an ailing industry. From Lena Dunham and Mindy Kaling to BJ Novak, Aziz Ansari and Amy Poehler, the ‘small screen to smaller page’ formula has proven to be a winning one – and one that these personalities will be hoping to emulate in the next year.

CAITLYN JENNER
In January 2016, the I Am Cait star announced she would publish a memoir chronicling her life, highly public transition and newfound status as the world’s most famous trans-woman. Jenner is undertaking the project alongside Pulitzer Prize-winning journalist Buzz Bissinger, author of Friday Night Lights (the nonfiction book, not the NBC series) who spent hundreds of hours with her prior to and after her transformation from motivational speaker Bruce into the glamorous Caitlyn Marie. Jenner reportedly approached Bissinger with the idea for the project, which will encompass her childhood years and gender dysphoria; her days as a gold-medal winning decathlete; her first two marriages and her rocky relationship with her children, as well as her marriage to Kris Jenner and time spent as the patriarch of the world’s most famous family. “Things have been moving so quickly that it will be nice to slow things down a bit and take the proper time to reflect on this journey,” Jenner said in a statement through Grand Central Publishing for the announcement. It’s also speculated she has pocketed a tidy seven- or eight-figure sum for the memoir, though representatives from Grand Central refuse to comment.


ANNA KENDRICK
No stranger to successful pitching, Hollywood’s most likable triple threat is slated to release a collection of essays with Simon & Schuster imprint Touchstone. Borrowing heavily from the witty dispatches that have made her one of social media’s most adored commentators, Kendrick’s collection of essays will “amusingly recount memorable moments throughout her life, from her middle-class upbringing in New England to the blockbuster movies that have made her one of Hollywood’s most popular actresses today.” In typical Kendrick fashion, the actress added (via a statement): “I’m excited to publish my first book, and because I get uncomfortable when people have high expectations, I’d like to use this opportunity to showcase my ineptitude, pettiness, and the frequency with which I embarrass myself. And while many of my female inspirations who have become authors are incredibly well-educated and accomplished comedy writers, I’m very, very funny on Twitter, according to Buzzfeed and my mom, so I feel like this is a great idea. Quick question: are run-on sentences still frowned upon? Wait, is ending a sentence with a preposition still frowned upon? I mean, upon frowned? Dammit!”


JESINTA CAMPBELL
On the home front, model and television personality Jesinta Campbell has partnered with Hachette Australia on a long-gestating book that she hopes will encourage readers “to live your life to its fullest.” Campbell announced the news on her eponymous website, writing “I am passionate about living a healthy, active life and often get asked lots of questions about my workouts, the food I eat, my beauty routine, how I have dealt with challenges in my life and what motivates me. ALL of this will be included in the book and my goal is that something in the pages inspires you to be the best version of yourself.” Hopefully the David Jones ambassador’s debut tome will also build on a number of well-received statements made throughout 2015, during which time Campbell took an eloquent stand against racism and the stigmatisation of mental health issues.


AMY SCHUMER
Capitalising on the momentum gained during a year in which she cemented her status as the reigning queen of comedy, Amy Schumer announced plans to release her first memoir through Simon & Schuster imprint Gallery Books. And it isn’t coming cheap. Schumer is reportedly getting paid somewhere in the vicinity of $11-13 million to pen her first book, which will also take the form of a collection of essays and is rumoured to be called The Girl With The Lower Back Tattoo. After a bidding frenzy, Schumer’s high-seven-figure deal dwarfed a previous $1 million advance from HarperCollins she returned in 2013 because she was too busy to start writing. The deal came shortly after Schumer won an Emmy for her Comedy Central sketch series, Inside Amy Schumer, and left audiences in stitches in the wake of her feature-film debut, Trainwreck. Schumer’s memoir will apparently canvas her childhood, how she got her big break in comedy, her family and feminism, and will “offer personal and observational stories from Schumer that range from the raunchy to the romantic, the heartfelt to the harrowing.” Rumoured themes include her father’s battle with multiple sclerosis and alcoholism and a traumatic sexual experience. “People are going to know everything about me,” she’s confessed. 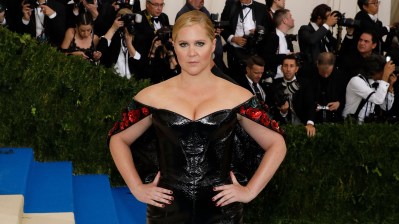