I’m perched on a dark blue velvet sofa inside Primo’s bar at the Frederick Hotel in Tribeca when I notice a woman staring at me. The tiny, windowless room is filling up fast ahead of the premiere screening of Model Squad, and it dawns on me I’m occupying prime position opposite the screen where the show is about to play.

Moments later, after an awkward interaction with the aforementioned woman (“Am I …? Do you want me to … I’m just going to move”) and a swift relocation on my part, a group of other-worldly creatures enter the room and fall in a heap on the couch, their slender limbs entangled. It is, of course, some of the stars of the show – Shanina Shaik, Devon Windsor and Nadine Leopold (later, Shaik’s husband DJ Ruckus and Windsor’s fiancé Johnny Dex managed to squash in). The rest of the cast is dotted around the room; Olivia Culpo has a seat at the table in the centre, Caroline Lowe and her crew are squashed into a booth, Ping Hue, Daniela Braga and Ashley Moore are at another (Hannah Ferguson is not present, having been in Shanghai for the Tommy Hilfiger show).

Soon it’s standing room only, there’s an electric feeling of anticipation in the air and squeals and whistles erupt – the first episode of the eight-part E! docu-series  has begun.

As viewers are introduced to each of the models (as if we don’t already follow their every move on Instagram), it’s fascinating to watch the women’s faces light up or faux-cringe in recognition of themselves on screen – they were seeing it for the first time.

When Olivia Culpo’s barely-covered behind flashes onto the screen during a photoshoot scene, her reaction is … well, how about I let you see for yourself?

Earlier, over drinks in the bar before the screening, Culpo told GRAZIA the experience of being followed by cameras had been “intimidating” … at first.

“It was a lot of hard work, and there plenty of moments where I was just trying to have a ‘me’ moment by myself and couldn’t, but I got used to do it.”

“I don’t think I could … but I would consider it,” she replied firmly.

Ever the entrepreneur, Culpo is keeping her options open, of course. 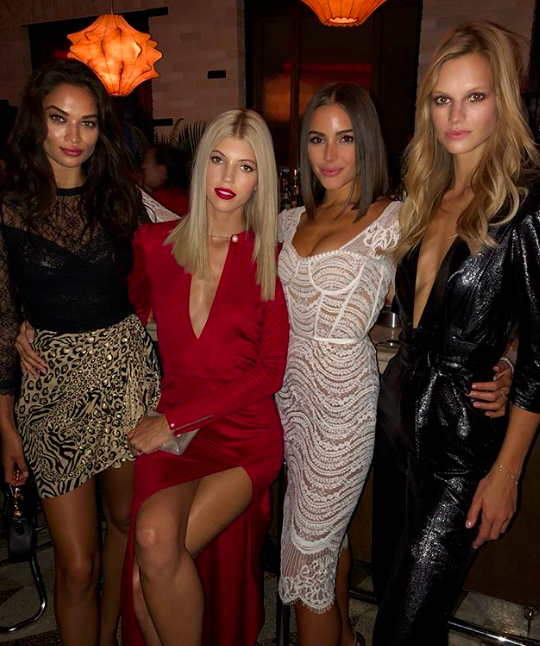 It wouldn’t be a reality show/docu-series without some drama, but Culpo, a former Miss Universe turned actress/model/social media queen, says there’s a more evolved message at the heart of Model Squadthan toxic fighting or cattiness.

“This show is highlighting how women support one another and how we all go through similar situations, helping each other back up when we may be torn down,” she says.

“I love that aspect of the show and I hope it really translates to the industry and people in general. A win for one of us is a win for all of us.”

Her co-star, Daniela Braga told GRAZIA she hopes Model Squadwill show the public some of the harsher realities of the modelling life.

“I’m excited to show people the real model’s life, because they only see the glamorous parts,” the Brazilian Victoria’s Secret model said, referring to gruelling schedules, jetlag, being isolated from family and friends, exhaustion and pressures.

“It looks so easy but it’s much more than that. Everyone’s life is perfect on Instagram. Nobody has any problems, any dramas … of course that’s not true.”

Caroline Lowe, who’s appeared in campaigns Tommy Hilfiger and American Eagle, echoed the sentiment, and gave an insight into one moment when the models discussed #MeToo and Time’s Up while cameras were rolling we hope made the cut.

“There was one day when we all discussed what we’ve been through in the industry in terms of [sexual harassment]. And how things are changing – before, we were taught to laugh if anything happens that’s uncomfortable, and now we’re being encouraged to say ‘no, that’s not okay’, to confront it.”

Model Squad premieres on the E! channel in Australia on Friday September 7 at 7pm to coincide with New York Fashion Week.