Oh, to be one of Miuccia Prada’s girls! It’s the dream, no? Prancing around the streets of Milan in her padded puffy blazers or silk flapper fringing. Taking pistachio crème-filled cannoli in her simple crewneck sweaters, gelato in her geometric knit-pullovers. The kind of clothing that makes you feel alive as a woman, makes you feel powerful. This was at the crux of Miuccia’s exploration for Fall Winter 2020, the strength of women and the inherent authority of that which is intrinsically feminine. 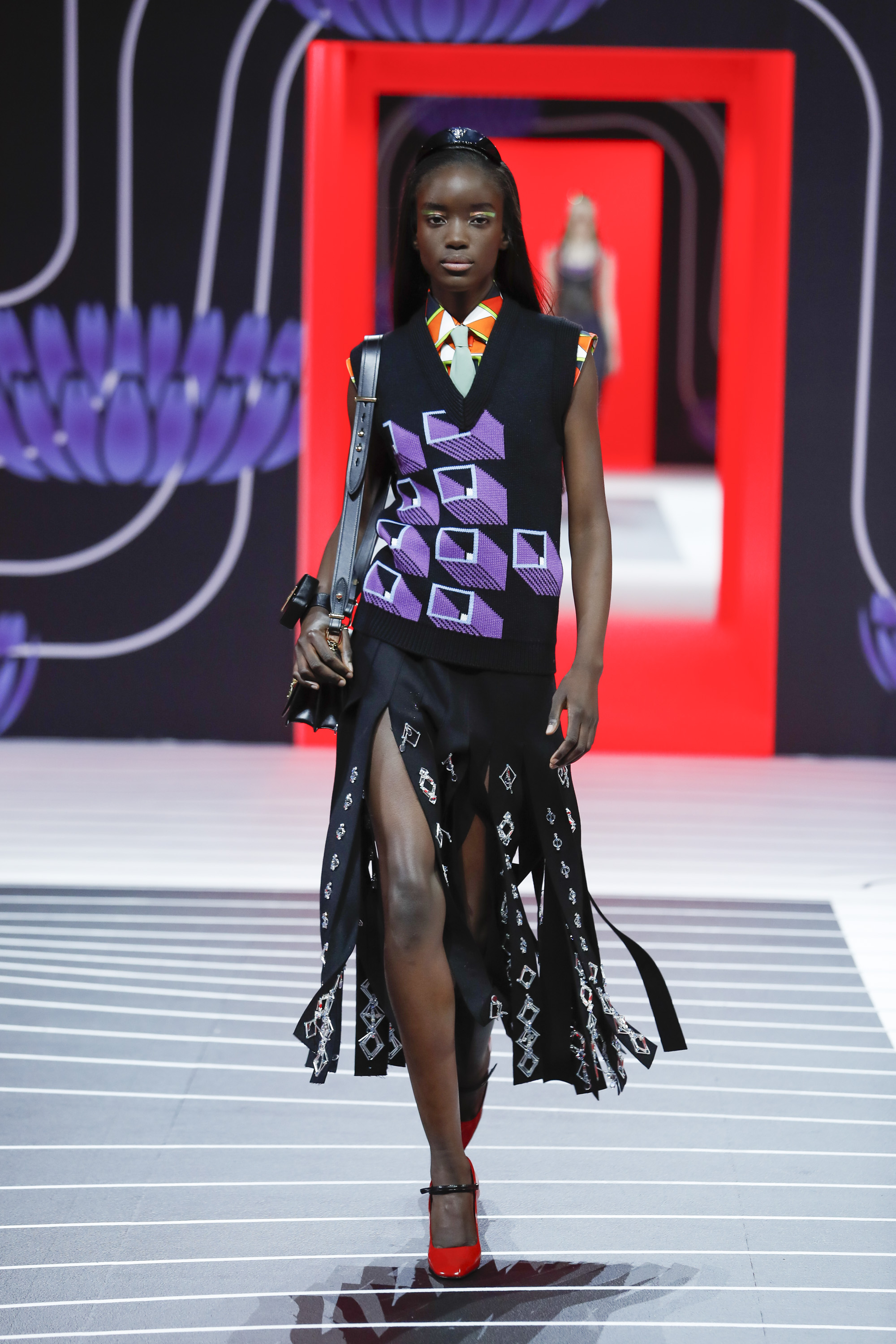 But it was not a negotiation of gender nor identity. This was Miuccia Prada’s celebration. A celebration of the agency of a woman and her tools of glamour, a kind of glamour she insists equates to strength and power, even command and force. A woman’s armour – not her downfall, as society so often codifies it.

Through overt expressions of femininity, she presented the softness, fragility and sensuality of women as the ultimate pillar of power. The exquisite hand-beaded shifts in lilac and lemon curd, or frilled bib-necked shirts in gossamer chiffon, for example, reflected her notion of delicacy defining strength. There were lingerie components, minaudières, mirrored compacts, purses and bijoux – even the flower, a universal symbol of women, became a recurrent motif in varied application. Such mechanisms of female self-representation were represented softly, gently – but also purposefully disrupted.

She tipped tradition on its head, dismembering its gendered sartorial semiology by cross-breeding it with utilitarianism and traditionally testosterone-inclined garb; basketball jerseys, boxy blazers, and suits-and-ties. Along with impeccable beading and embroidery and whisper-thin tulle sat lofty fabrications like nylon and metal, sportswear and trenchant detailing. It was’t so much a play on gender neutrality – these were women’s clothes – but they picked up on cues of masculinity and celebrated them accordingly (and with a feminine flourish, of course). Mannish blazers were cinched at the waist to echo the eternal feminine, while shirting was illuminated with sparkling crystals, boyswear “corrupted by glamour”.

Movement, too, was key; the vents, layered fringing and deconstructed pleats a study in kinetics. As models walked inside the Deposito at Fondazione Prada in Milan, flashes of skin tied back to the femininity as power equation. But it was all wrapped in classic Prada-ism; bold colour-blocking, graphic geometry, glimmering jewels, incongruous yet pleasing fabrications, copious quirk.

As clothing mirrors the pluralism and complexity of female identities, Prada Fall Winter 2020 proved a pure declaration of this. Here, she considered – or reconsidered – a woman’s pursuit for glamour and aesthetics, casting it through her own surrealist lens. “We can be strong and feminine at the same time… women carry the weight now,” Miuccia mused backstage. In Prada’s delicate frill-necks, lotus silk twin-sets and glossy shearling-trimmed vests, we do. This is Prada’s gl-armour, a uniform of both beauty and strength, passion and power, not to be taken lightly. 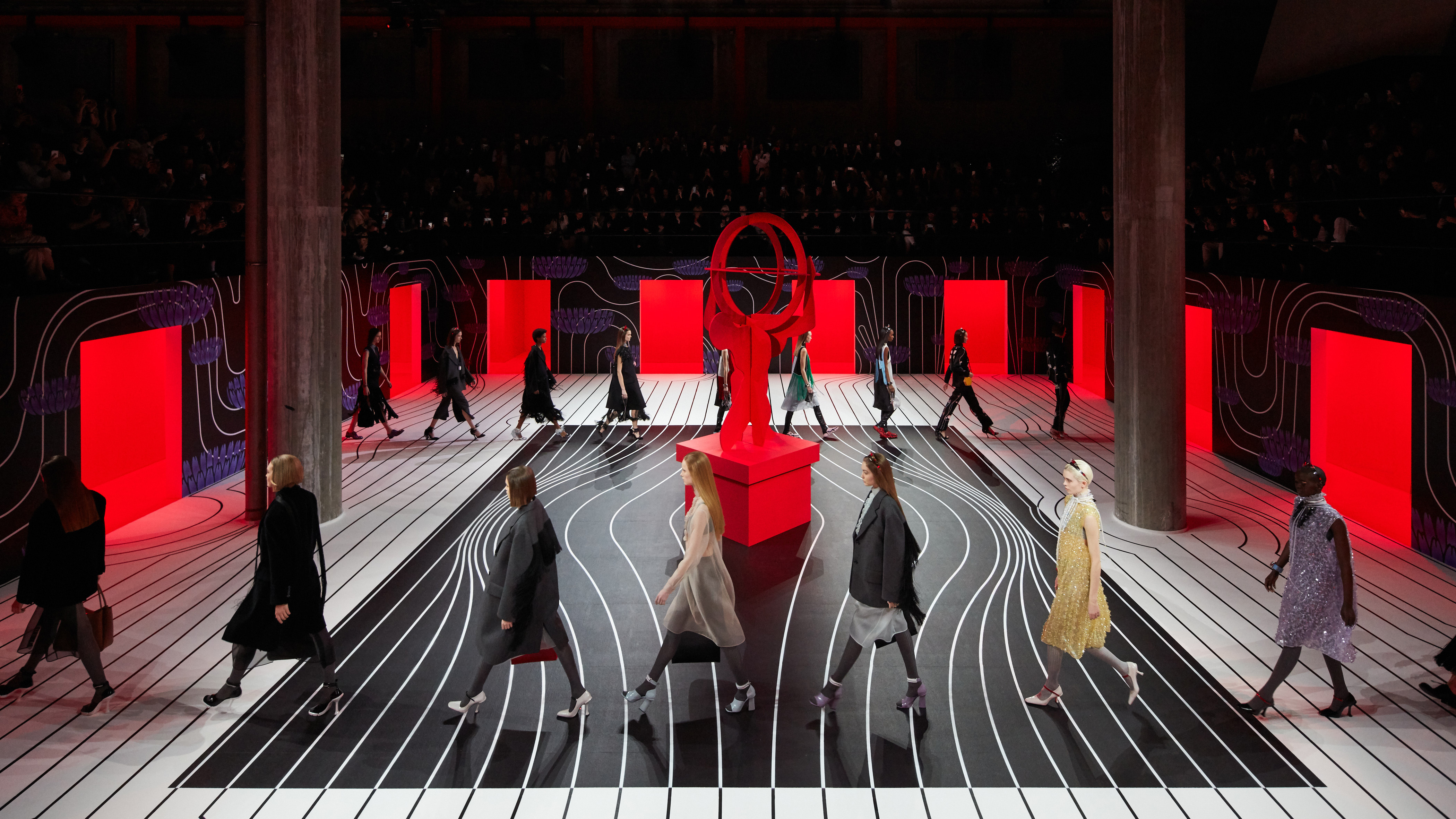 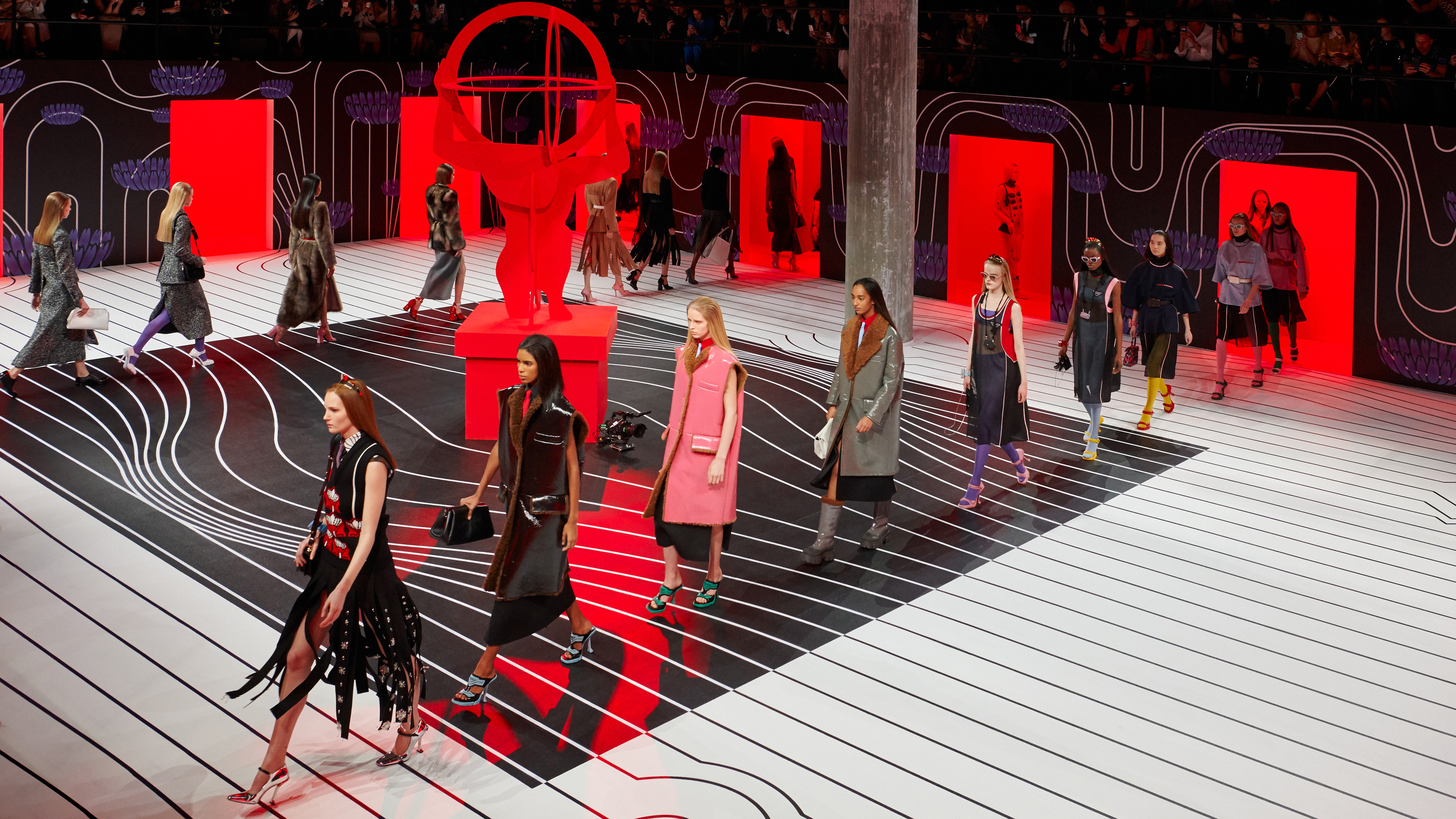 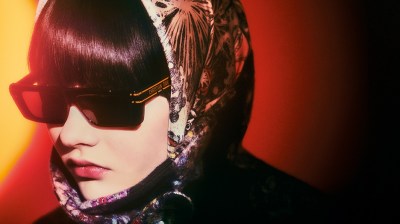 Australians, All Let Us Rejoice: How To Shop Dior’s Most Exclusive Styles Online