We can't help but stan

Miley Cyrus has undergone many an aesthetic transformation during her decades in the public eye—but none have been as ‘high fashion’ as the chapter she’s in now. Late last week, the 28-year-old released Plastic Hearts, her sixth studio album, and one which has already been dubbed her most “self-assured record to date” by Rolling Stone. In keeping with the album’s musical references, Cyrus has transformed her look into that of a new-age glam rocker, complete with a peroxide pixie cut and a vast array of vinyl pants.

In keeping with the new wave spirit she’s channelling, Cyrus has made a point of using her virtual album tour to promote under-the-radar and emerging fashion designers. Yesterday, in a series of live sessions recorded for Apple Music, Cyrus opted for a fantastic embellished suit from the Brooklyn-based designer Marshall Columbia’s spring summer ’20 collection. Columbia launched his label during lockdown, and hadn’t yet picked up a major stockists when Cyrus’ stylist, Bradley Kenneth, reached out.

Before that, Cyrus wore a piece by the Belgian designer Ludovic de Saint Sernin, boots by the Parisian designer Harry Halim, and a feathered cowboy hat by the culty British footwear brand Western Affair. On, and there was that ’80s prom dress moment, which Cyrus wore for an appearance on The Graham Norton Show. The dress was a voluminous creation from the recent Central Saint Martins graduate Sohee Park, whose eponymous label, Miss Sohee, has become one of the most buzzed-about new brands in Britain.

Alongside her remarkable mix of emerging talent, Cyrus and Kenneth have also opted for vintage and custom pieces by Mugler (the French fashion maison is an A-list favourite right, counting Dua Lipa and Kim Kardashian among its devotees) and Alexandre Vauthier haute couture. Even without a tour in sight, we can safely say Plastic Hearts is one of the most fashionable albums of 2020. 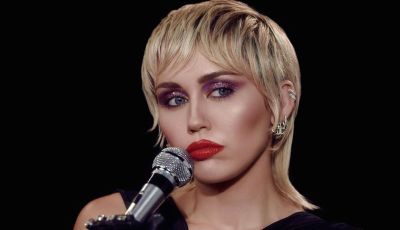