The photographer's psychologically charged, cinematic works propose striking alternative realities - ones that draw on Australia's dark past and, in doing so, chart a course toward a better future 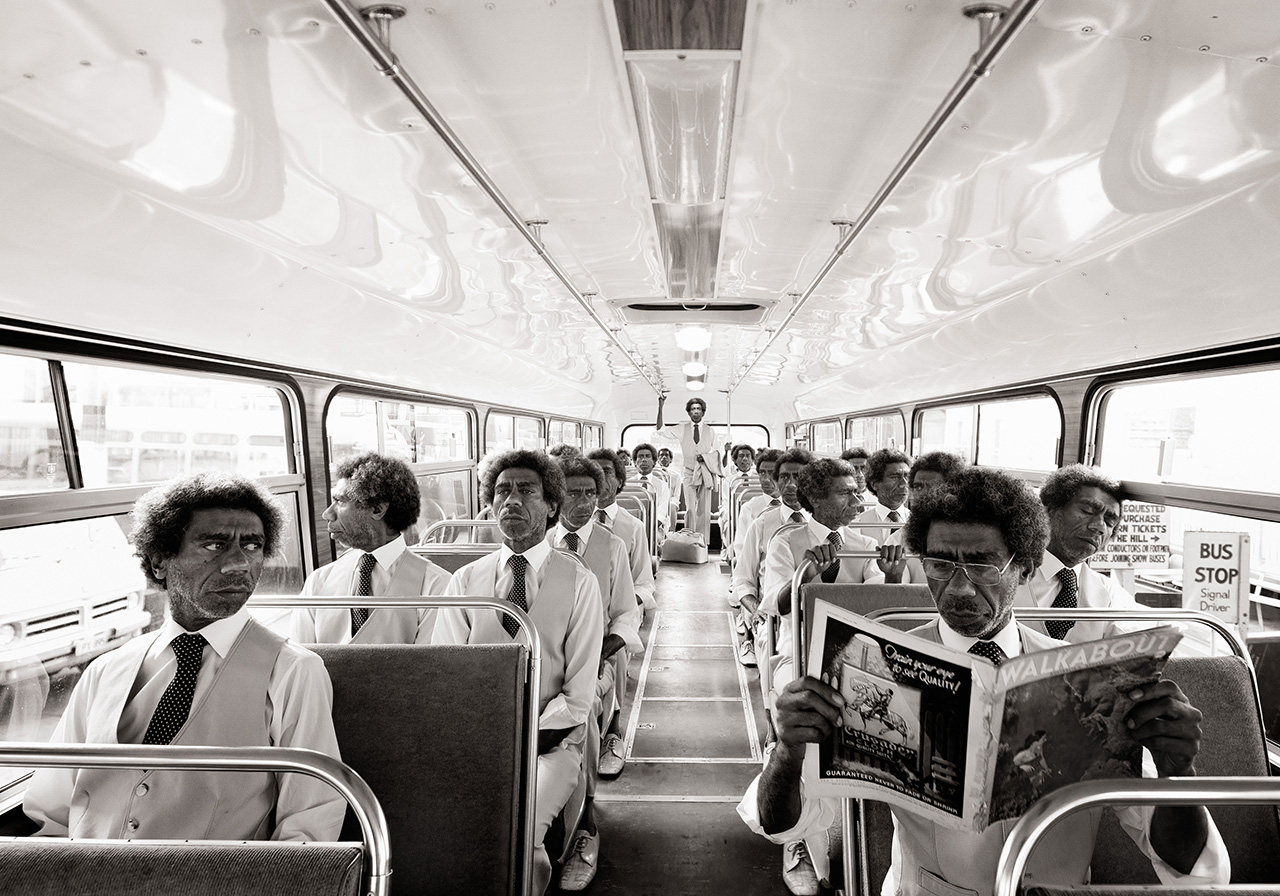 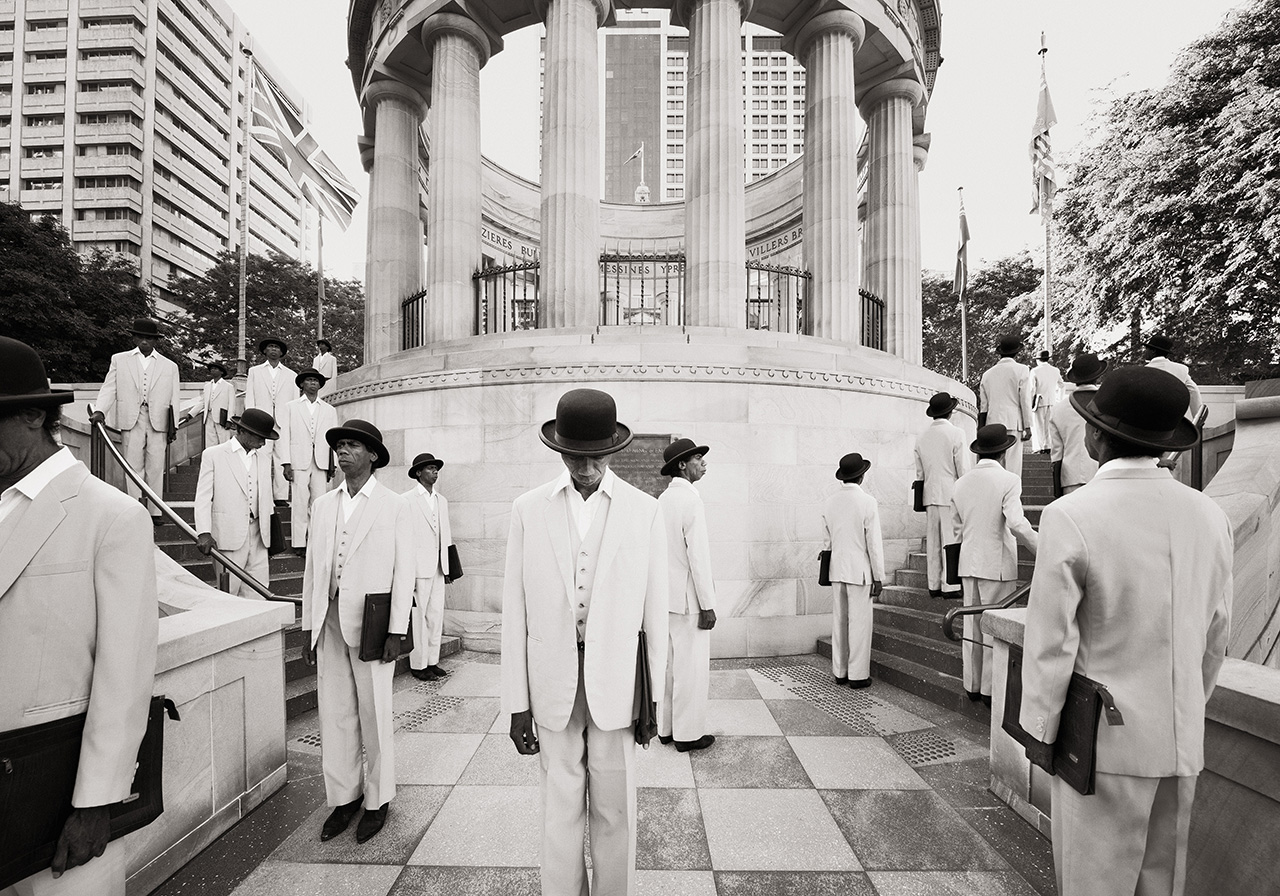 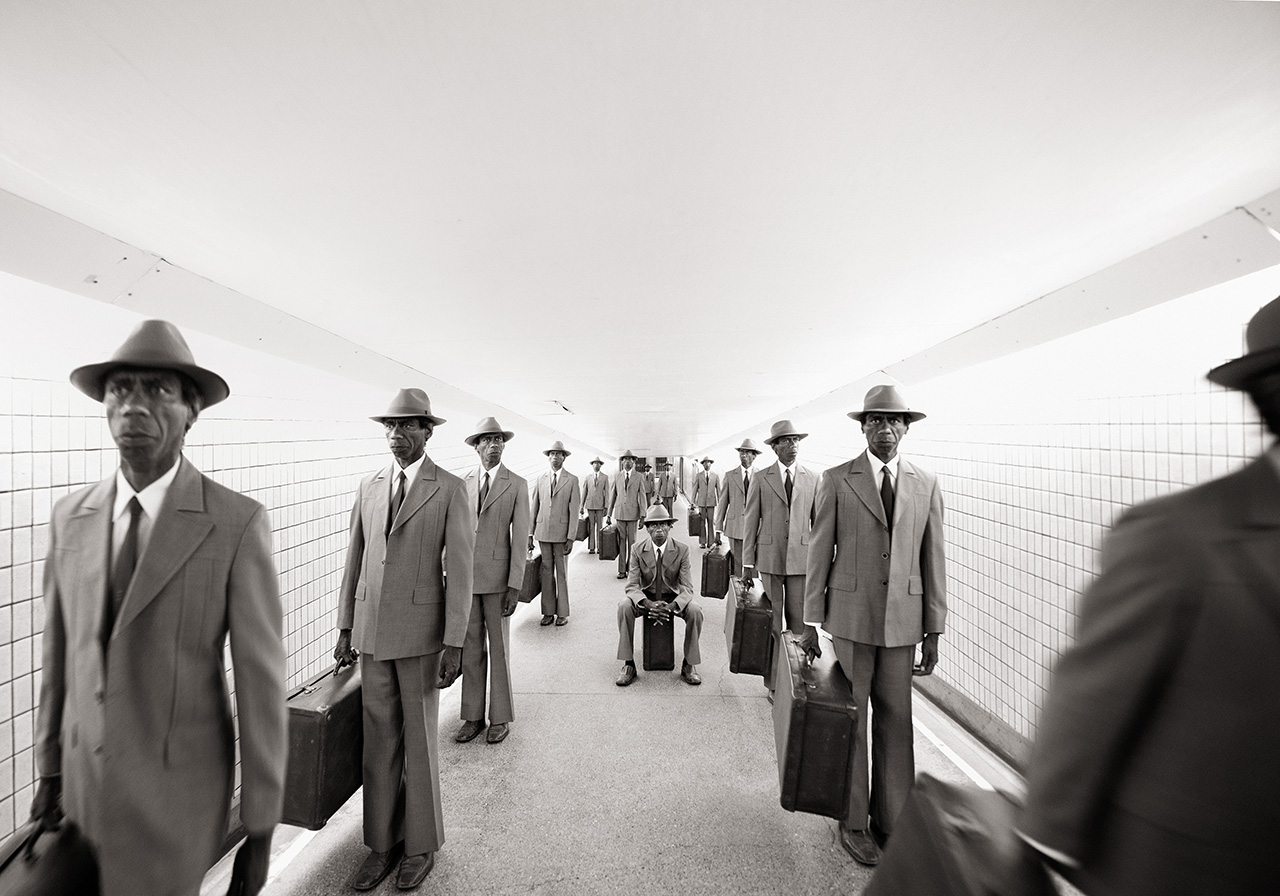 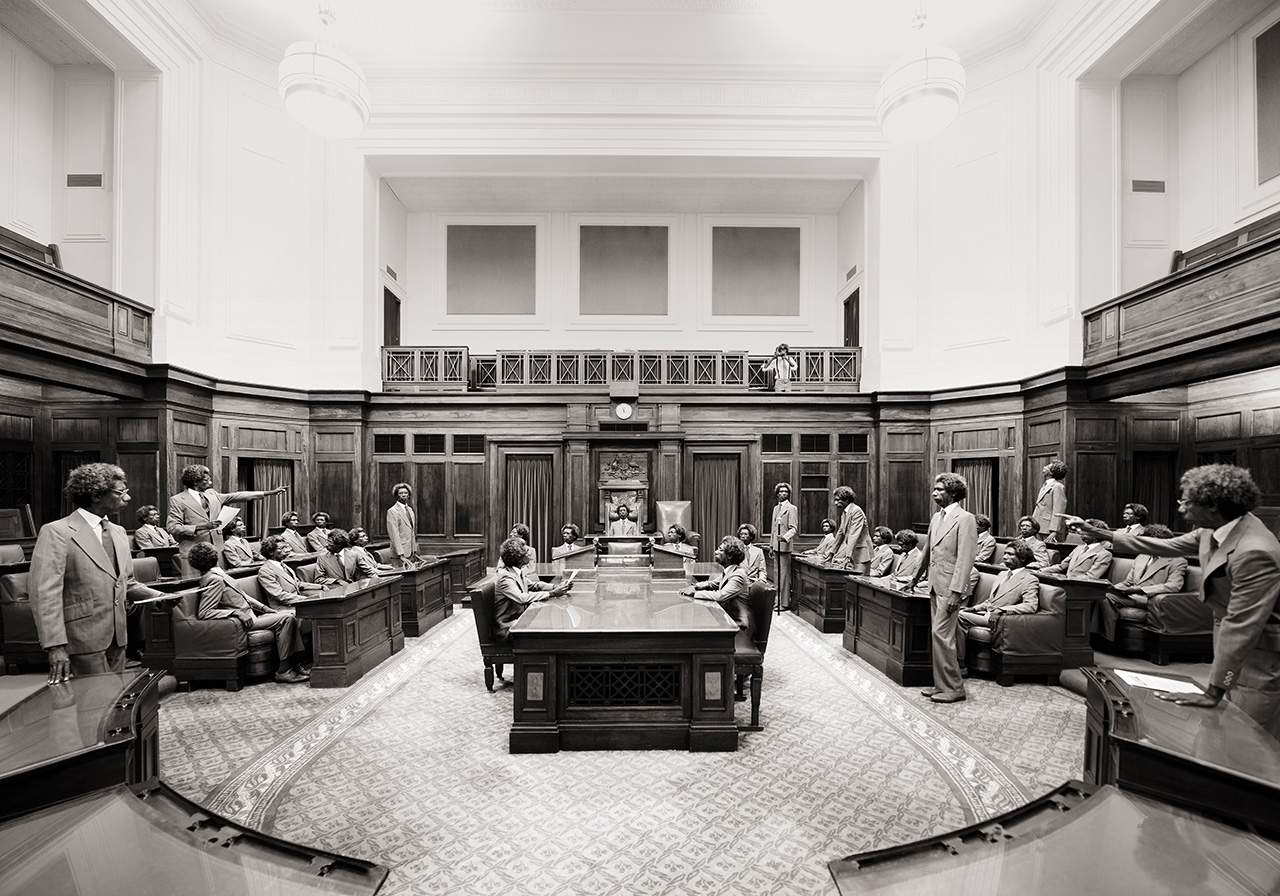 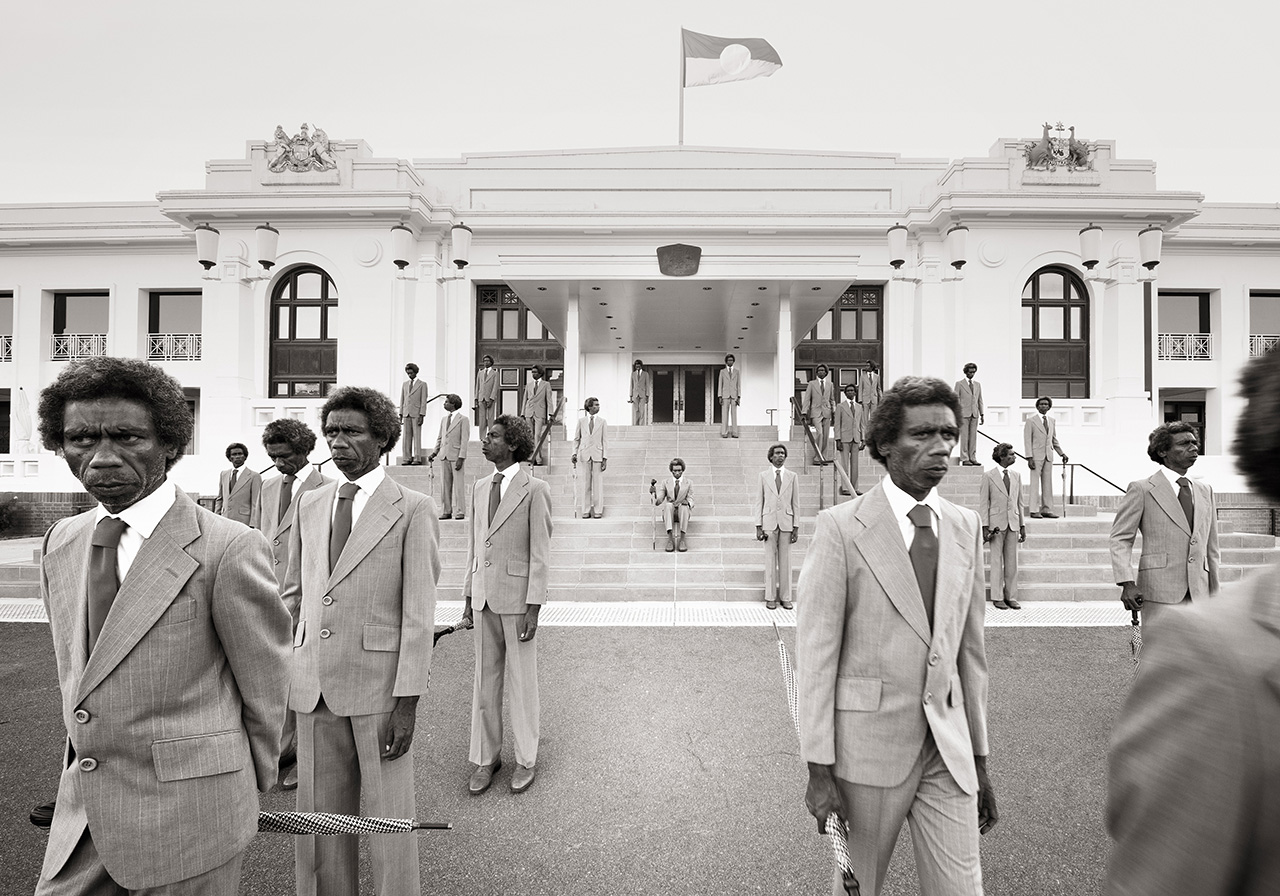 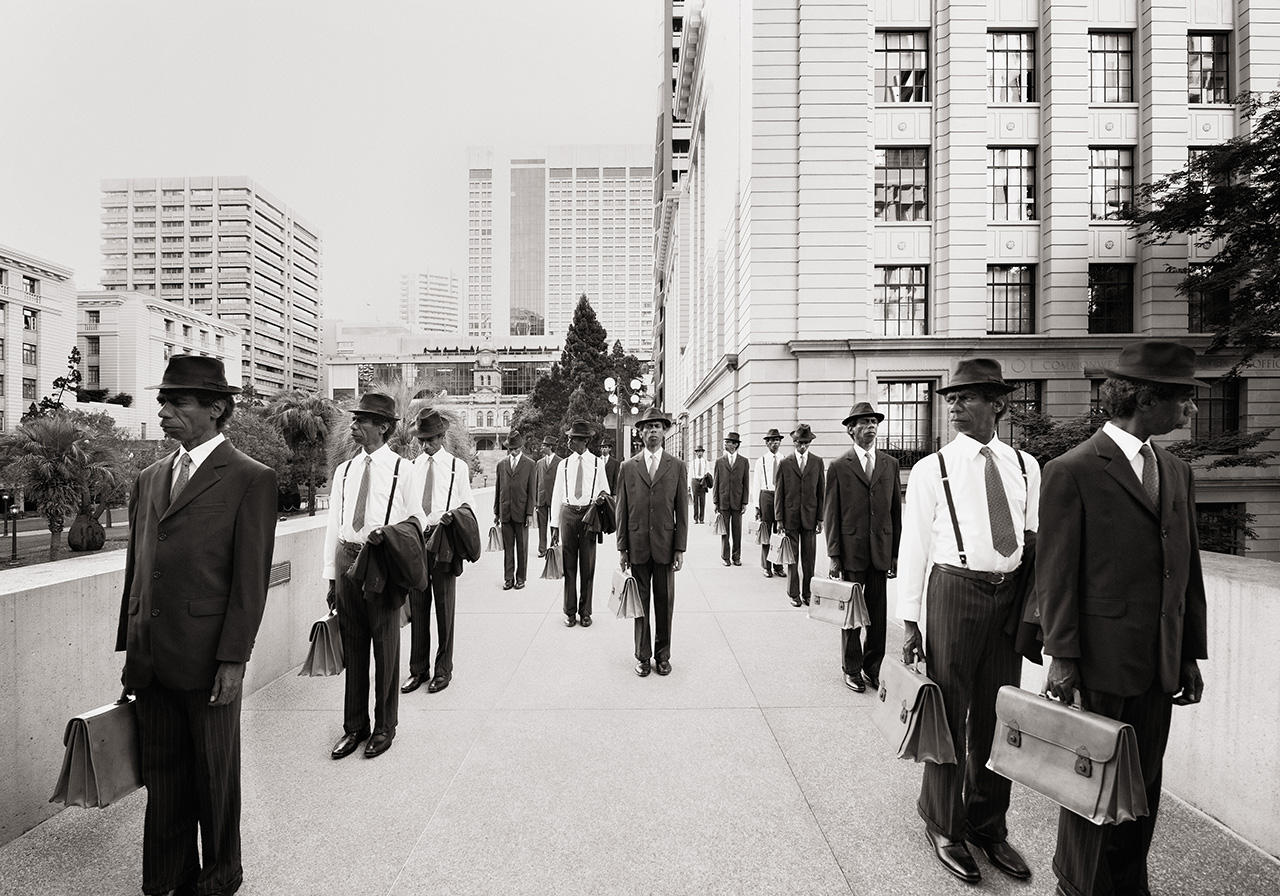 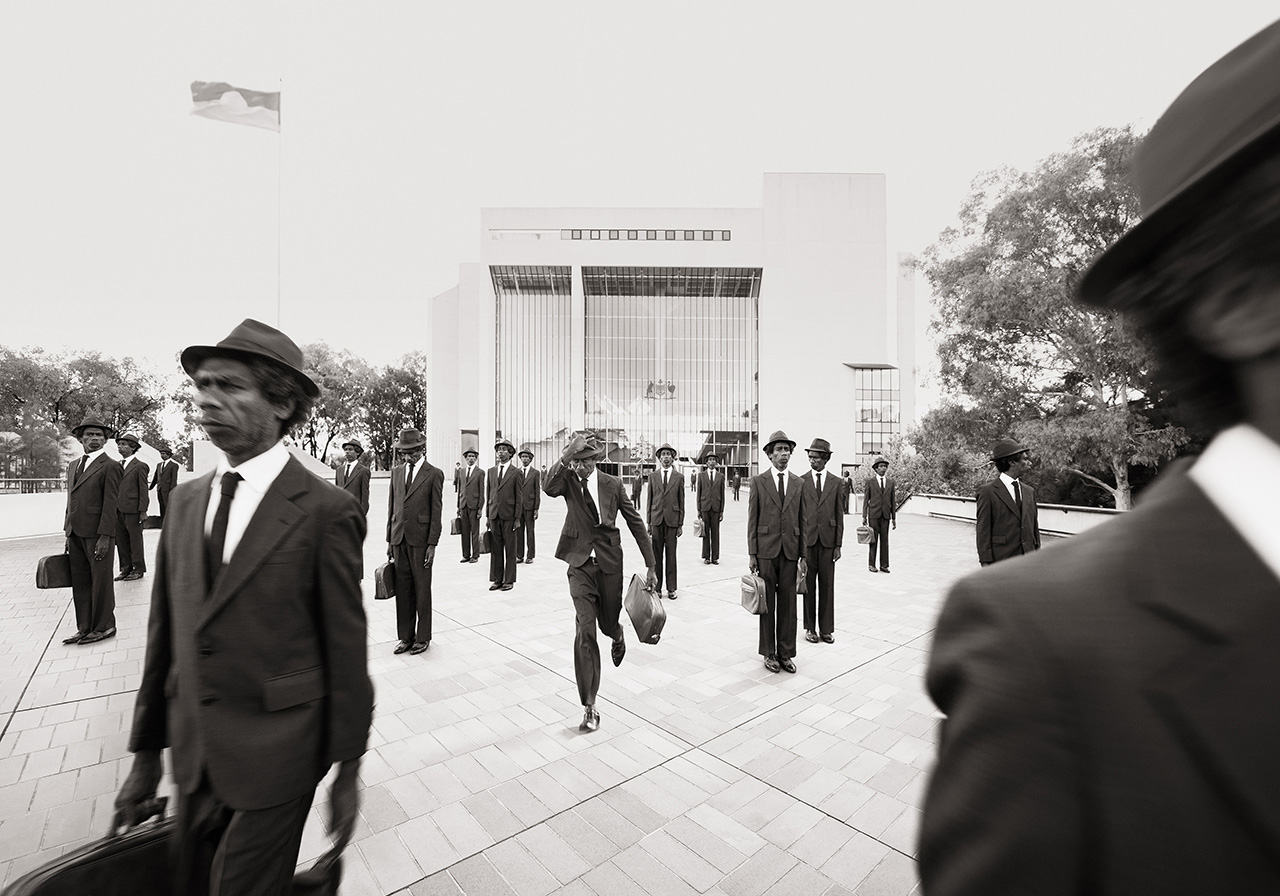 Exhibiting his work as part of Colony: Frontier Wars is Michael Cook, a Brisbane-based photomedia artist of Bidjara heritage who creates cinematic and psychologically-charged works that propose striking alternative realities for life in Australia that resist colonial narratives – one oftentimes immune to the the ongoing trauma of colonisation and its practices. A selection of Cook’s photographic works from the series Majority Rule appear in the gallery above and in Colony: Frontier Wars, alongside an exploration of the theme of ‘identity’ in his own words below.

This article was originally published in the March print edition of GRAZIA, out now. Subscribe to receive your copy here.

I was born in Brisbane and adopted at birth into quite a large family in Hervey Bay [Queensland]. My family is not Indigenous; I’m the only one in the family that’s adopted and always knew about my Aboriginality.

My mother used to fight for Indigenous rights. The first Aboriginal person I ever met was [Australia’s first Indigenous MP] Neville Bonner back in the late ’60s. He used to come to my mother’s house before he was into politics. Back then it was about bringing different cultures together [and] having that crossover between aboriginal and white people. As a tiny little kid, I remember him talking to my mum on the front veranda for hours on end. My mum gave me a really good understanding about my Aboriginality as part of my identity. I always felt sort of out of place with it back in the ’70s and ’80s. There was a typical level of racism within society that you just turned a blind eye to or laughed off, and that’s how anyone else that was different at all [responded]. I suppose I never felt comfortable. I was comfortable about being Indigenous, but society made you feel uncomfortable about it.

I got my first camera when I was 14 and when I was 17 I got my first job in a one-hour photo lab. Then, at around 20, I started my own makeover studio and went in and out of photographic labs and photographed weddings here and overseas for about 20 years. In 2007, I started doing some fashion projects which gave me a process of knowing how to create a storyline and work out how to actually present an idea.

I’d been concentrating on work around identity for a year or two and I had an idea: what if governments had been able to see from an Aboriginal perspective, where would Aboriginal people be today? I overlaid Aboriginal features on top of all the prime ministers and I started doorknocking galleries. I went into a gallery in Brisbane and the owner said, “If you quit all your other photography for at least 12 months, I’ll show this body of work.”

I gave up everything. He showed the body of work and four curators from the Indigenous section of the National Gallery bought that body of work in the first week it was shown, and two more bodies of work in 2011 as well. My career’s just sort of taken off since then, and I’ve never really gone back to producing any other type of photography.

I was brought up only learning about Captain Cook and white settlement; at school, we never learned about anything to do with Indigenous culture. My work is all about me connecting with that part of my identity and learning about Indigenous culture. When you look at my imagery, it has this softness and a beauty to it, and I think it allows people to take their time to view it and get the message, because the message can be harsh given our history. I leave the work really, really open. They’re quite simple questions that I ask within the work, and I suppose I’m asking myself those questions as well. There’s always a ‘what if ’ scenario, and there’s usually a role reversal.

I hung the prime ministers [artworks] in Old Parliament House in Canberra, and there were busloads of schoolkids; nine- and 10-year-olds coming in and having conversations over the prime ministers. I need to be able to know within myself that I’m creating something that might change people’s opinions, which is the main reason I create art.

I thought back to the ’50s and ’60s, [when] you wouldn’t have seen Aboriginal people coming to and from work. You wouldn’t have seen them in prominent jobs. So how do you expect in three or four generations’ time that a lot’s going to change? I wanted to place all these people in the street and [ask], ‘What opportunities would you feel you had if you were the minority of the population?’

Joey’s got stories about Neville as a kid. He remembers Neville going down to the beach and teaching all the Aboriginal kids how to throw boomerangs. One big boomerang came around and broke someone’s leg I think, and he was out of there [Laughs]. Neville was out of there. 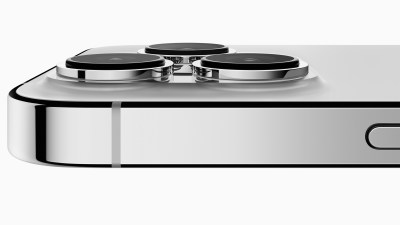