The 9 Standout Beauty Moments Of The 2017 Met Gala

The brazen, the brassy and the bulbous beauty of the Rei Kawakubo-inspired spectacle

The first Monday in May. A sartorial wonderland for adroit designers, showy celebrities and keen fashion voyeurs. A day of theatrics, eccentrics and  an anything-goes sentiment.

It also beholds a beauty labyrinth of dizzyingly high beauty notes, think slick shininess, gilded flourishes and a technicolour dream world, all of which is totally accepted and applauded like no other celebrity platform.

This year celebrated fashion’s avant-garde architect (and quiet-achiever), Comme des Garçons’ Rei Kawakubo, in a brilliant spectacle of the eccentric and the experimental.

Here, we honour the wacky, the wild and the wayward hair and makeup manifestations of the Met Gala 2017. Beauty bravado at its best.

Rihanna’s Shocking Pink Maquillage
Like Kawakubo, who historically strayed from fashion’s conventions, Rihanna too goes rogue when it comes to fashion and beauty. Powerful pigment aplenty, a shade of shocking pink was applied with painterly perfection across eyes and cheeks. Buoyed on by the 80s revival, shiny pink strobe was exaggerated all over the apples of the cheek, and taken onwards and upwards around the eye (both bottom and top). Ever the beauty recusant, RiRi is all kinds of makeup yes. Cara’s Metal head
Revelling in the theme, Cara entered a brave new beauty world, concluding the seemingly never-ending tale of her social media hair saga with its final chapter; a bald head. Freshly shaved, her head was spray-painted silver and dotted fitfully with a scatter of sequins. Show-stealing is a hard feat at the Gala of excess, but Cara and her Tin Man hair (or lack thereof) may have very well stolen the show. Katy’s Bedazzled Mani
Makeup and fashion aside (but can we just take a moment on the theatrical marvel of Pat McGrath’s talent and John Galliano’s to-die ‘Witness’ veil?), Katy Perry’s nails got the beauty engine ‘a roaring. Looking past Lorraine Schwartz’s gargantuan emerald-cut diamonds is a hard feat (come on, you can do it), but Perry’s souped-up nail beds are well-worth the deflection. Bedazzled, gilded, evil-eyed; the nail art had it all, mimicking the gem-like turns of Perry’s outfit. Meticulous in its execution, the motifs popped on a lacquered apple-red base. We salute you, oh mysterious mani-giver. Rose’s Sculptural Perm
The rose in Australia’s thespian set, local darling, Byrne, skewed slightly from her conservative, fashionable self – as too did her hair. A nod to Kawakubo’s sculptural fancy, Byrne’s hair was slicked from the root, protruding with textural delight half-way down her head. Tight curls were coaxed and teased outwards, with hair going all kinds of sideways. Selena’s Magenta Lids
Don’t expect the sweet-never-salty Selena to take any jaw-dropping beauty risks, but hey, she tried. Tapping into the trend of pink peepers, Selena’s are decidedly pop, with sweeping magenta across sockets, towards the brow, and a wash of shell-pink through the inner lid. All thanks to Marc Jacobs Beauty and marvellous makeup Mr, Hung Vanngo. Gigi’s elongated cat-eye
A quirky rendition of the classic cat-eye, Gigi’s liner was exclusive to top lid, and double lined; in the cut-crease of the lid and on the lash line. Curved and stretched, it almost reached her hairline, then cleverly followed the path of an overly swept, blown-out bun. Safer compared to her ‘it’ girl counterparts, she usurped her usual glam, albeit ever so slightly. Rita’s parquet PIXIE
It looks like Rita’s Called, Called Carpet Call for her Met Gala hair. A hairy homage to parquet flooring, this geometric mosaic of platinum pieces makes for a seriously impressive mane moment. Interestingly, the patterned, bleached ‘do was juxtaposed with as-classic-as-they-come makeup; arched brows, big lashes and a red lip, elevating the hair even more (if that’s even possible). JANELLE’S DIAMOND-DOTTED PIXIE
Songstress and all round cool kid, Janelle Monaè, passed the Met’s hair test with dazzling colours. Whilst beauty was encased in black Ralph and Russo feathers, her inky pixie crop was slicked down and dotted with shiny crystal blooms, rendering a dramatically poetic look. Donatella’s Highlighter Hair
Part kindergarten-calamity, part why-not-it’s-the-Met-Gala, it seems Donatella made a primary school pit-stop on the way to the Gala, dip-dying her hair with a yellow highlighter. Streaks of acid yellow stemmed from the root to the tip, making for a statement Faber-Castell moment. 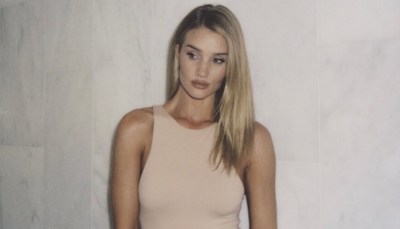 Rosie Huntington-Whiteley On Mascara, Derma-Rolling And The Affordable Brand That Helps With Acne