To Mercado, to Mercado

The careful hand of the maker is evident in each dish served at this subterranean Spanish restaurant, where pigs don’t simply fly – they soar 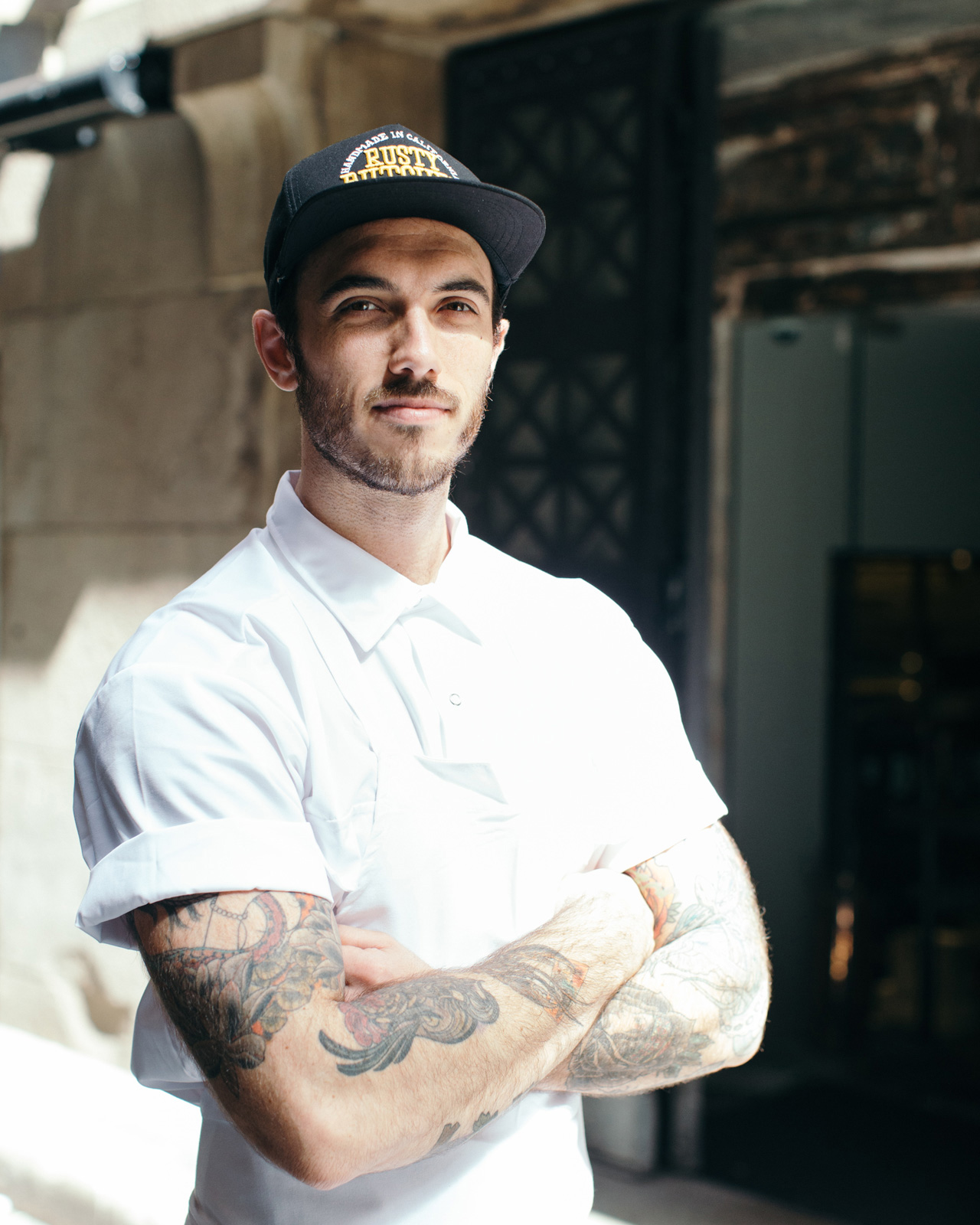 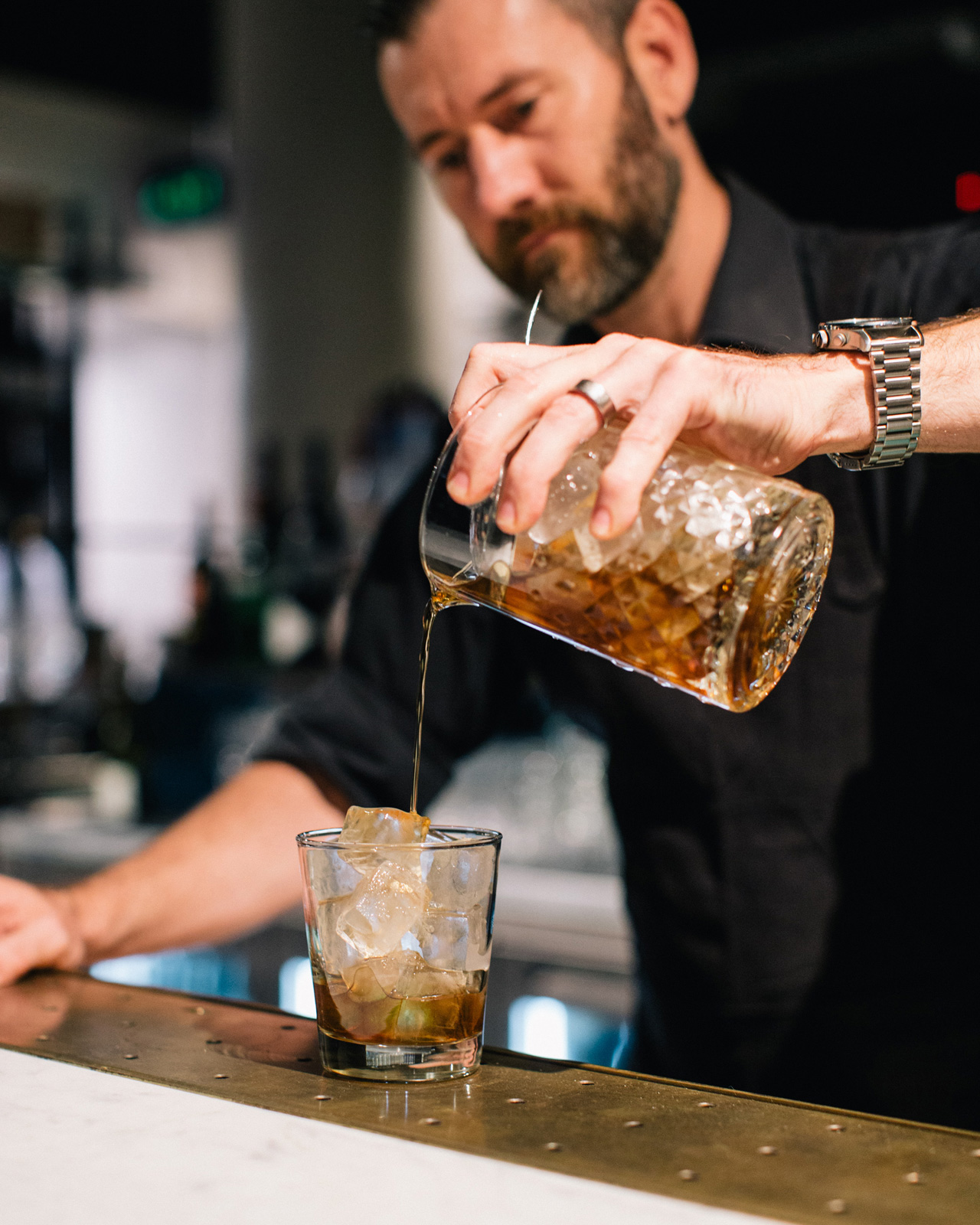 A bartender prepares a cocktail 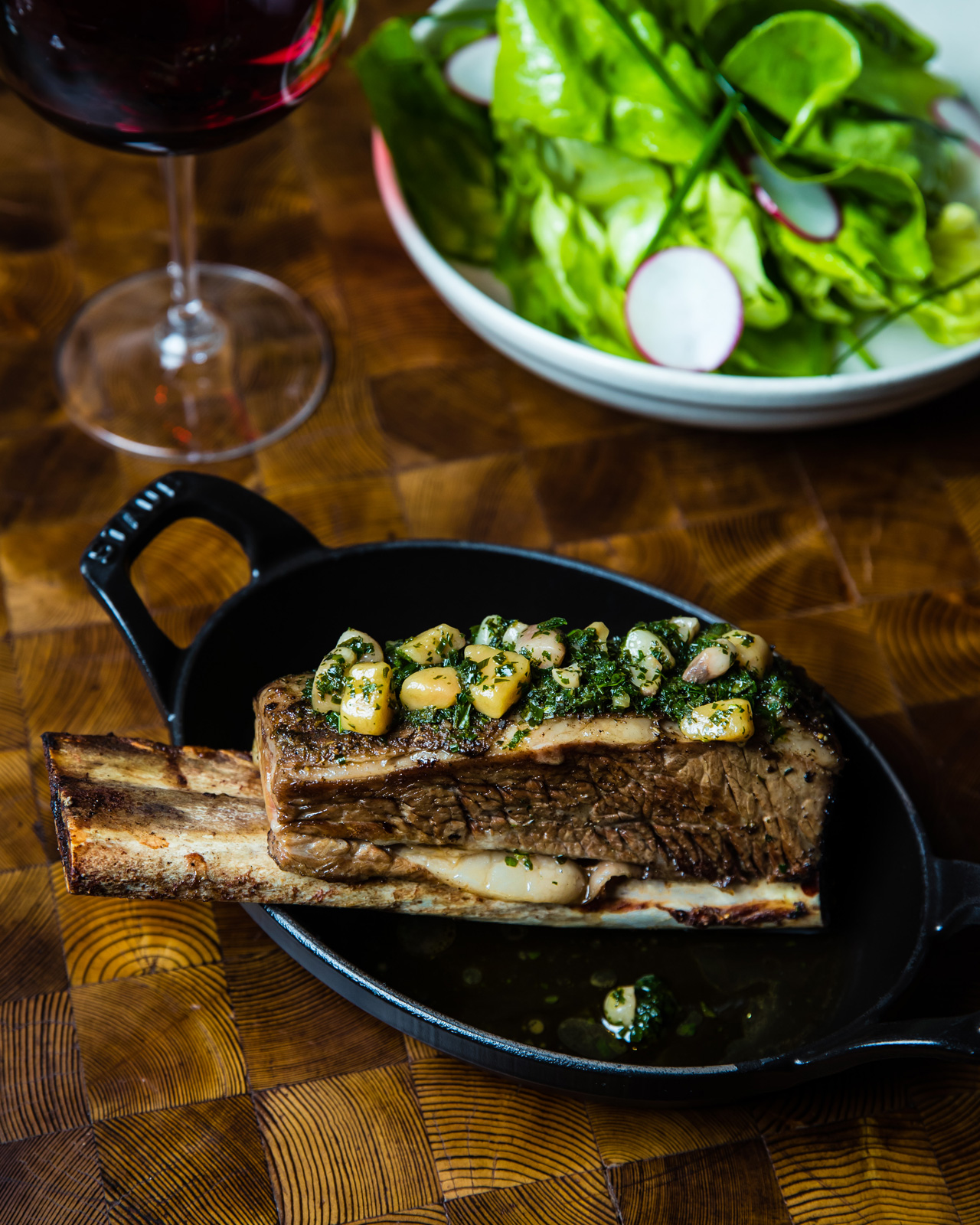 At Mercado, Sasi places as much emphasis on the rearing of his meat products as he does their serving 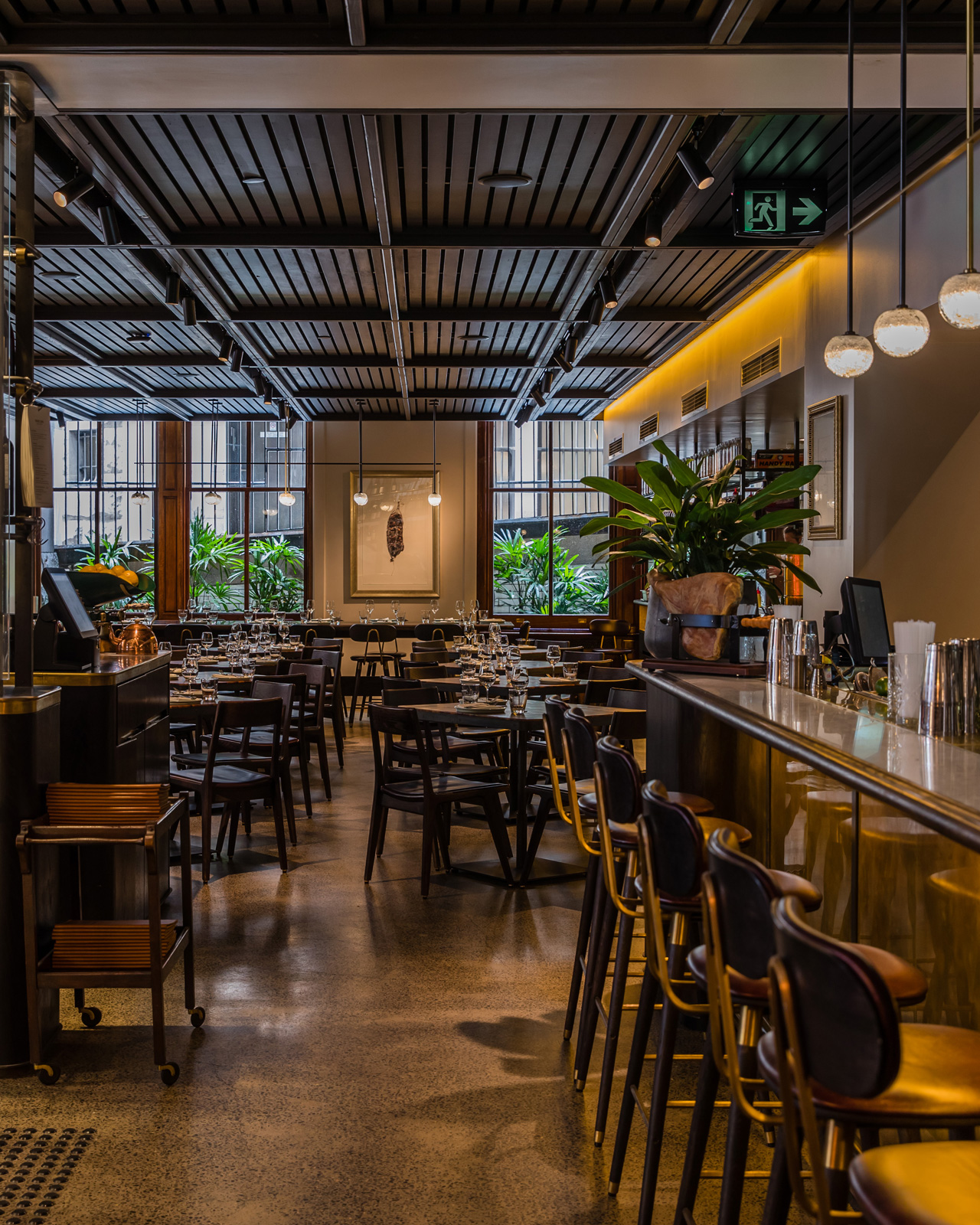 The scene at Mercado

There’s a flying pig tattooed on one of Nathan Sasi’s arms. “It’s a bit of a cliché – chefs and their tattoos,” says Sasi, laughing amiably in resignation to the well-worn, well-inked trope. “If I had my time over I probably wouldn’t have any,” says the chef, who at 34 is one of the city’s most exciting and affable young talents. The airborne pig isn’t the only member of Sasi’s permanent larder. Another tattoo features a particularly adroit cutlery wielding kraken, there’s what looks like a Balmain bug too, and another takes its graphic linear cues from a wedge of cheese. Sasi has been making additions to this colourful shopping list for over a decade now; a friend of the chef’s is conveniently a Japanese tattoo artist who has inked a fair few – and there are quite a few. Just over a year ago, the chef’s wife, Sali, who is one of the co-founders of Stylerunner and Poppy Renegade, gave him an IOU for another. What that tattoo will be, however, is still up for debate.

If you were fond of teasing out parallels, you might think that a smoked wagyu tongue, or perhaps a tiger prawn plumbed from the depths of the Clarence River would be next on the chef’s forearm foraging agenda. That’s only because, at one point or another, each of the ingredients etched onto Sasi’s arms has appeared on the menu at Mercado, the subterranean Spanish restaurant that the chef has been at the helm of for over two years now. The spoon-savvy octopus, for example, has appeared at Mercado roasted with kipfler potatoes and finely chopped oregano; likewise, the block of cheese might as well be a cipher for generous hunks of ash-covered Valençay, a French variety of goats milk cheese, that come dusted with a snow-white mould after aging for weeks in the restaurant’s curing chamber. Here, in another cellar contained deeper within, Sasi is making his own distinctive marks on the kind of artisanal smallgoods that run as much through his veins as they do on the floor of his restaurant. It’s the pig however – small and fanciful though it may appear by comparison with the cheese, the crustacean or the octopus – that has given Sasi wings on which to soar himself.

“I’ve always been passionate about making things from scratch,” Sasi tells GRAZIA, perched on a stool adjacent Mercado’s refined six seater bar. “When my father migrated here from Hungary in 1969, he made smallgoods for 15 years. I’ve been to parts [of Hungary] where my family is from and it’s amazing but you can see why they moved. The opportunities in Australia are so much better.” Making things from scratch is a family tradition that Sasi continues in earnest through his work at Mercado, the kind of singular restaurant where everything – the bread, the butter, the pickles, the cheese, the vinegar, all the cured meats – is made from scratch with a passion that’s readily discerned as much in Sasi’s retelling as it is on the plate. It’s a style of cooking that the chef says verges on the old school, but it’s a school of thought to which he still happily and readily subscribes. It’s also one that he has gleaned from working with some of the industry’s best during his almost two decade career.

Though his love of a hands-on, nose-to-tail approach has arguably been instilled into him by virtue of his genealogy, the chef began his formal training at just 15-years-old under the tutelage of Neil Perry at Rockpool, whose fertile training ground provided Sasi (like many of his contemporaries) with a springboard to a generous stint spent working in Europe and the States. In England, he cut his teeth further under the watch of Heston Blumenthal at both The Fat Duck and Dinner, the iconoclastic chef’s more casual offering at the Mandarin Oriental. It was the cuisine of Spain, however, that Sasi says he fell in love with while working six month stints on chartered boats in the Mediterranean, and later, in Barcelona over four years. Though time spent cheffing at sea is admittedly a lucrative lifestyle, Sasi says his return to Sydney coincided with a desire for a return to the normalcy of life on land. There were firmly grounding turns at est. under Peter Doyle and at Sean’s Panorama under Sean Moran, before the chef launched the first of his holistic dining concepts at Nomad in Surry Hills. Soon after its launch, Sasi says he identified a gap in the market in Sydney’s city centre for reasonably priced food with serious craft credentials but without any of the pretension that often accompanies anything so intensely labored over – and so the chef was left with little choice but to take his vision back to market.

If it isn’t already evident, Mercado derives its name from the Spanish for ‘market’. The name above the door isn’t the only indication, however, that you’ve arrived at a shrine to Moorish cuisine. Concealed beneath street level on an unassuming corner behind George Street and on the corner of the Angel Place Recital Hall and Ash Street, there’s something almost theatrical about the restaurant. Street height windows frame the action of the pavement above, winnowing in on the unsuspecting action; if the timing is right, you’re guaranteed dinner and a show from both the pass as those passing by on foot above head. The restaurant’s finishes are likewise show stopping: the tables, redolent of a butcher’s block, do double time as a stage for Sasi and his team; the spotlighting is a feat of production design and the open-plan kitchen, island bar, brassy accents, leather banquettes and marble staircase add to a sense of theatre abetted by an ample cast of characters.

Many of those characters are trained on a farm in Oberon, where Sasi’s now-business partner Steve Anastasiou (China Doll, China Lane) breeds some of the pigs whose contribution to Mercado is so significant. Sasi estimates that around 75 per cent of the restaurant’s pork products are sourced from that farm; the remaining produce is sourced from from another farm, Melanda Park, in nearby Windsor. “The great thing about working with these guys is that you can tailor make your product, [as opposed to] a supplier who will say, ‘This is what we use’”, says Sasi. “To be able to work with someone and [specify] what size and breed you want is a great opportunity – to be able to custom make your product. I come from a family [who has] worked with food – my uncle is a cattle farmer as well – so it’s great to be able to support these people.” The nursery rhyme, as it turns out, was onto something after all: To market, to market, to buy a fat pig.

At Mercado, the customization process begins with the very food those animals are fed and extends to the treatment they receive on arrival in the restaurant’s curing chamber. Only once it takes pride of place as a scenery chewing ham on the bar overlooking the restaurant is its work done. Mercado’s signature jamon is cured and aged in-house for 12 months prior to its service. The result is miles apart from what is available commercially, says Sasi, who considers the control he is allowed to exercise over the product from start to finish to be one of the things about which he is most proud. For the diner, the taste is impossibly rich: the jamon is butter-soft and prone to melting on the tongue as quickly as the spread itself would. For Sasi, the taste is comparable to the taste of freedom.

Sasi and his wife recently celebrated the first birthday of their son, Harvey, so named for the lead character on the television series, Suits. “It’s such a hard job, and at the moment I sacrifice a lot of time that I could be spending with him,” says the chef. For the time being, Sasi is hesitant to wish upon his son the kind of career that would see him work as hard as his father, his grandparents and even his namesake have. “My parents placed such a strong emphasis on education,” Sasi says of his father and mother, a school principal. “My dad worked really hard as well [and encouraged me to] go to university and get a degree [so I could] do an office job and not have to work as hard as he did. Both my parents worked two jobs to send my sister and I to school, so I would want my children to go into a career that didn’t necessarily focus on financial reward, but didn’t require that they work so physically hard. I think that cuts a few years off your life.”

As for that next tattoo? Well, it might just have to be a Harvey-approved suit, albeit on a much smaller scale. That smoked wagyu tongue tattoo will have to wait – at least for the moment. Who knows, it might even taste all the better for it.