Meghan Markle and Prince Harry have made their first appearance since announcing they’re expecting their second child. On Monday, February 22, the former senior royals virtually attended Spotify’s Stream On event to discuss one of their new endeavours, Archwell Audio. This past December, the couple signed a multi-year deal with the audio streaming platform to produce and host their own podcast series. Their first episode launched in line with the holidays, and it features a special appearance from 21-month-old baby Archie.

The purpose of the pre-recorded Spotify event was for creators to come together to talk about the power of podcasting. For the occasion, the Suits alum donned a sleeveless Oscar de la Renta dress featuring a summery citrus design that fans speculate might be a nod to the family’s new home state of sunny California. Others think it might be a tribute to the couple’s lemon wedding cake, but Markle has not confirmed nor denied any speculation at the time of writing.

As for her beauty look, Markle wore her hair down and in a center part, styled in layered, loose waves. She subtly enhanced her features with eyeliner and mascara and embraced fresh-looking skin and freckles. To tie the look together, Markle accessorised with a gold Cartier Love bracelet and elegant rings. A look at her entire ensemble in the clip below.

“We created Archewell Audio to make sure that we can elevate voices that maybe aren’t being heard, and hear people’s stories,” Markle told viewers during their brief appearance. Her husband added, “The biggest part of this is trying to create this community of where you can share. We will encourage everybody else to then share their own vulnerabilities in that safe space.” A preview of the guests set to join them on the podcast includes Stacey Abrams, Deepak Chopra, and Elton John.

The couple’s virtual appearance comes just over a week after the announcement that the Duke and Duchess of Sussex will not be returning to their royal roles. Buckingham Palace released a formal statement on Friday, February 19: “The Queen has written confirming that in stepping away from the work of The Royal Family it is not possible to continue with the responsibilities and duties that come with a life of public service. The honorary military appointments and Royal patronages held by The Duke and Duchess will therefore be returned to Her Majesty, before being redistributed among working members of The Royal Family.”

Even without a senior royal’s duties, Markle and Prince Harry’s schedules remain packed, especially now that they have a podcast to record and a $177 million Netflix deal. Likewise, Markle remains as well-dressed as ever. If you’re inspired by the summery number she wore to film the Spotify live stream, shop GRAZIA’s curated luxury edit of fruit-patterned maxis and minis—including her exact Oscar de la Renta. 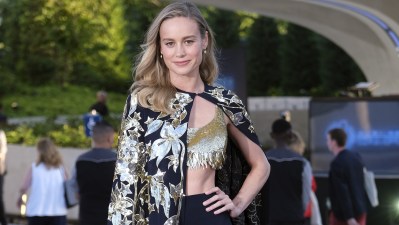