For Max Mara‘s Resort 2023 show, the lush gardens of Lisbon played host to the house’s latest offering – an unapologetically romantic ode to powerful women. The collection was inspired by designer Ian Griffiths‘ reverence for intellectual, poet and social activist Natália Correia, whom he encountered via a portrait by the artist Nikias Skapinakis.

Correia, a polarising figure in the mid-20th century that used her art-form to push cultural boundaries, is said to have left an insurmountable mark on Portuguese artistic and political life. Griffiths wanted to channel her passion for feminism and bold sensuality through the collection, which translated to a raft of fluid yet unmistakably feminine silhouettes.

“Just as Max Mara has formulated its own brand of feminism, so did Correia,” read the collection’s show notes. “Correia’s Antologia de Poesia Portuguesa Erótica e Satírica was considered otré by the authorities against whom she campaigned; to Max Mara it suggests a more voluptuous, curvier silhouette with an occasional nod to the gathered skirts of traditional dress.”

While inspiration was borrowed from Correia’s life as a prominent figure in Portuguese society, the collection was still quintessentially Max Mara with plenty of discernible house design codes – signature soft coats, sculptural separates and crisp shirting – amidst sultry sheaths, fishnet tights and tailored pencil skirts cut to sit just below the knee.

Models wore minimal makeup, with hair styled in loose waves that were tucked insouciantly behind the ear. The collection also paid tribute to Lenços de namorados do Minho (‘handkerchiefs of love’), an artistic Portuguese tradition that sees young women embroider a square of linen or cotton with sweet nothings to gift to their beloved.

Max Mara imbued the collection with similar romantic motifs, including hearts, flowers and doves featured in prints and crystal brooches, mirroring the sophisticated naïf style of the Lenços de namorados do Minho. 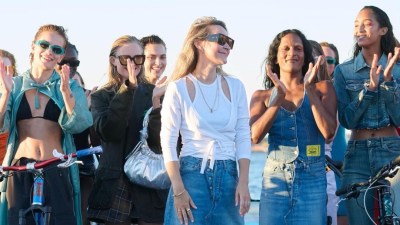 As Always, The GANNI Runway Was A Joy

Is Prada The Next Luxuriate to Move Into Skincare and Makeup?
Next page