Mariah Carey’s Most Iconic Beauty Moments Of All Time

For the first time ever, Mariah Carey's "All I Want For Christmas Is You’ has reached No. 1 on the Billboard Hot 100 charts, 25 years after its release. That calls for a celebration. A beauty celebration

You know it’s Christmas when Mariah Carey’s All I Want For Christmas Is You starts playing on the radio. Or blares through shopping centre halls. Or is sung (badly) by festive buskers in street malls. It’s almost like that very song is the catalyst for Christmas. Those festive first few bars come on the car radio and instantly we think, it’s here! Time to start decking the halls, etc, etc.

Today, 25 years after its release, that very song is officially number 1 on Billboard’s Hot 100 charts for the first time, ever. Astounding, we know. So we thought we’d celebrate Mariah Carey – forever our Santa baby, chart-topper or not – with a collection of her greatest beauty hits over time. From baby-faced, perm-laden songstress to all-out pop prima donna; Mariah Carey’s beauty moments have featured just about every beauty trend from the 90s and 00s. From the over-plucked brows and body glitter of the 90s, to the deep perma-tan and bronzer situation of the 00s, she’s literally done it all when it comes to beauty.

Here, we round up her most iconic – and interesting – beauty moments through the ages. Because, all we want for Christmas is Mariah.

bare skin + mass of curls in the 90s
Those famed curls ran wild in the 90s, which Mariah accompanied with bare skin and a soft metallic lip

mermaid waves + bronzer at the 2006 Grammy Awards
When Mariah took home three Grammy’s in 2006, her beauty was equally as big; voluminous, waist-length mermaid waves and a lot of bronzer

plait pigtails, hair clip + body shimmer in 1999
What do you wear when your album is called ‘Glitter’? Plait pigtails, a cute hair clip and a lot of body glitter, of course

Crimped half-up half-down ‘do + blow-waved bangs in 1996
A true glimpse at retro beauty – remember when crimped hair was a thing?

refined curls + pink blush in 2016
You’ve got to hand it to her, Mariah remains loyal to her beauty favourites; glossy pink lips, pink blush and perfect curls

Permed up ‘do + dramatic smokey eye at the 1991 billboard music awards
The remnants of the 80s are evident here, with Mariah’s early 90s beauty riffing on the previous decade

piecey pigtails + copper lids in 2002
Britney Spears is that you? Mariah has a Baby One More Time moment in 2002 with pigtails and copper makeup

wedding day curls + clean skin at her first wedding in 1993
Changing out of her Very Wang gown into a white suit (how chic), her “Just Married” beauty was beautifully natural with luminous skin and those iconic wiry waves

mermaid half-up hair + metallic lip at the 1996 annual American music awards
An I Dream of Jeannie ‘do with bangs, a chocolate smokey eye and metallic lip round out this stellar 90s beauty look

body glitter + bouncy curls at the 1997 MTV video music awards
Mariah was wearing body glitter long before you, RiRi (even on her midriff)

layered blow wave + glossy lips in 1998
Riffing on the hairstyle of the decade, “The Rachel”, Mariah paired her textured, Aniston-esque blow-out with a peachy, glossed-up pout

pulled back perm + brown smokey eye in 1998
Mariah pulled that iconic perm back off her face to reveal a sexy, smoked-out eye in hues of brown

low pony with tendrils + glowing skin at the essence awards in 1999
As radiant as ever, Mariah teams her low-slung ponytail with two perfectly-placed tendrils, a nude lip and beautifully luminous skin

bombshell bouffant + creamy pink lip at a gala in 1991
it was all about her go-to smudged wing and a big, bombshell blow-out at a Spring Gala in 1991 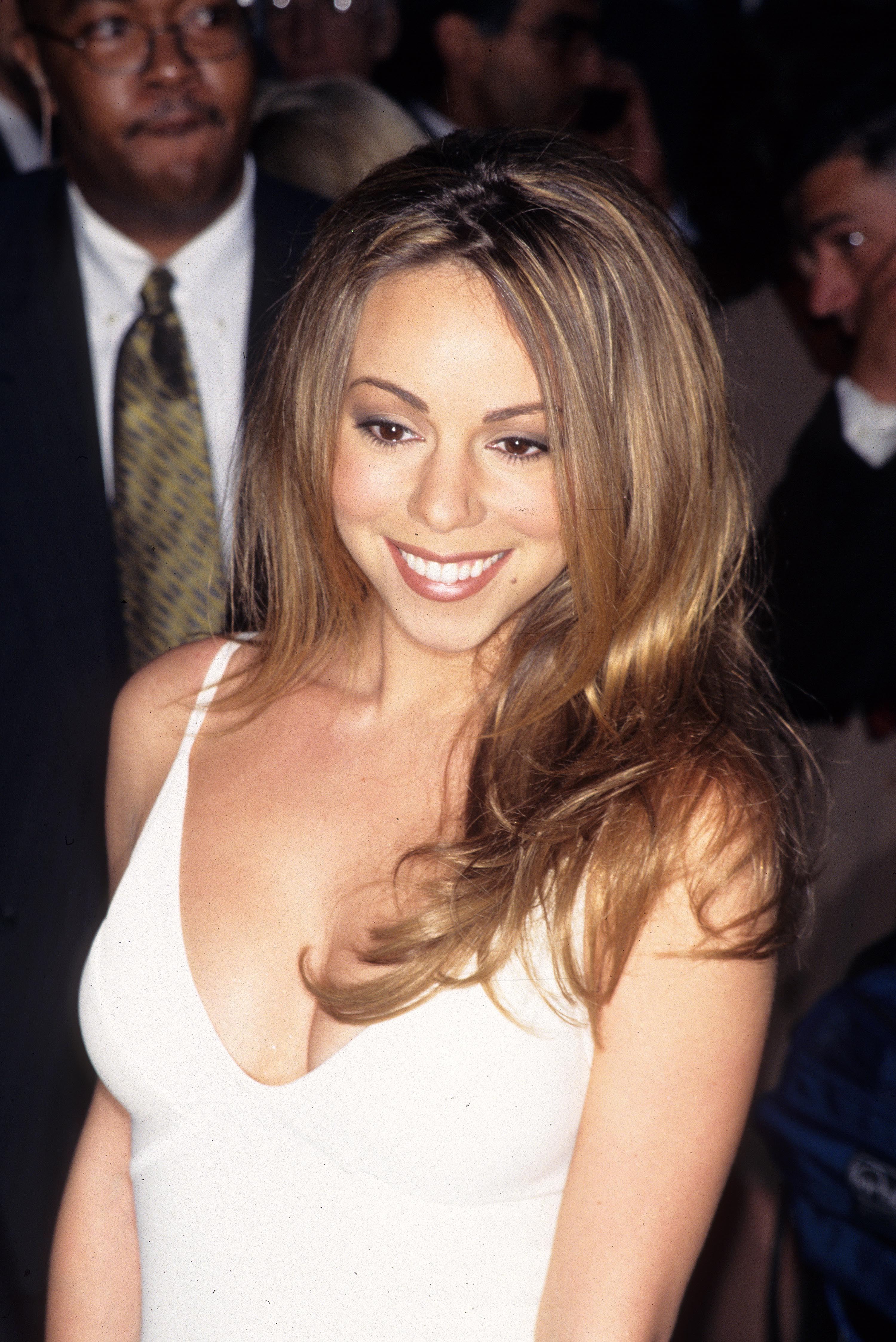 Ironed-out ends + lip liner at the 10th annual billboard music awards in 1999
Long before GHDs, Mariah was ironing out her hair (probably with an actual iron, like us) and wearing a classic 90s beauty staple: lip liner