Looking for God in the art of Gareth Sansom, pop transformer

The prolific, provoctive Australian painter Gareth Sansom is the subject of an expansive survey at the National Gallery of Victoria 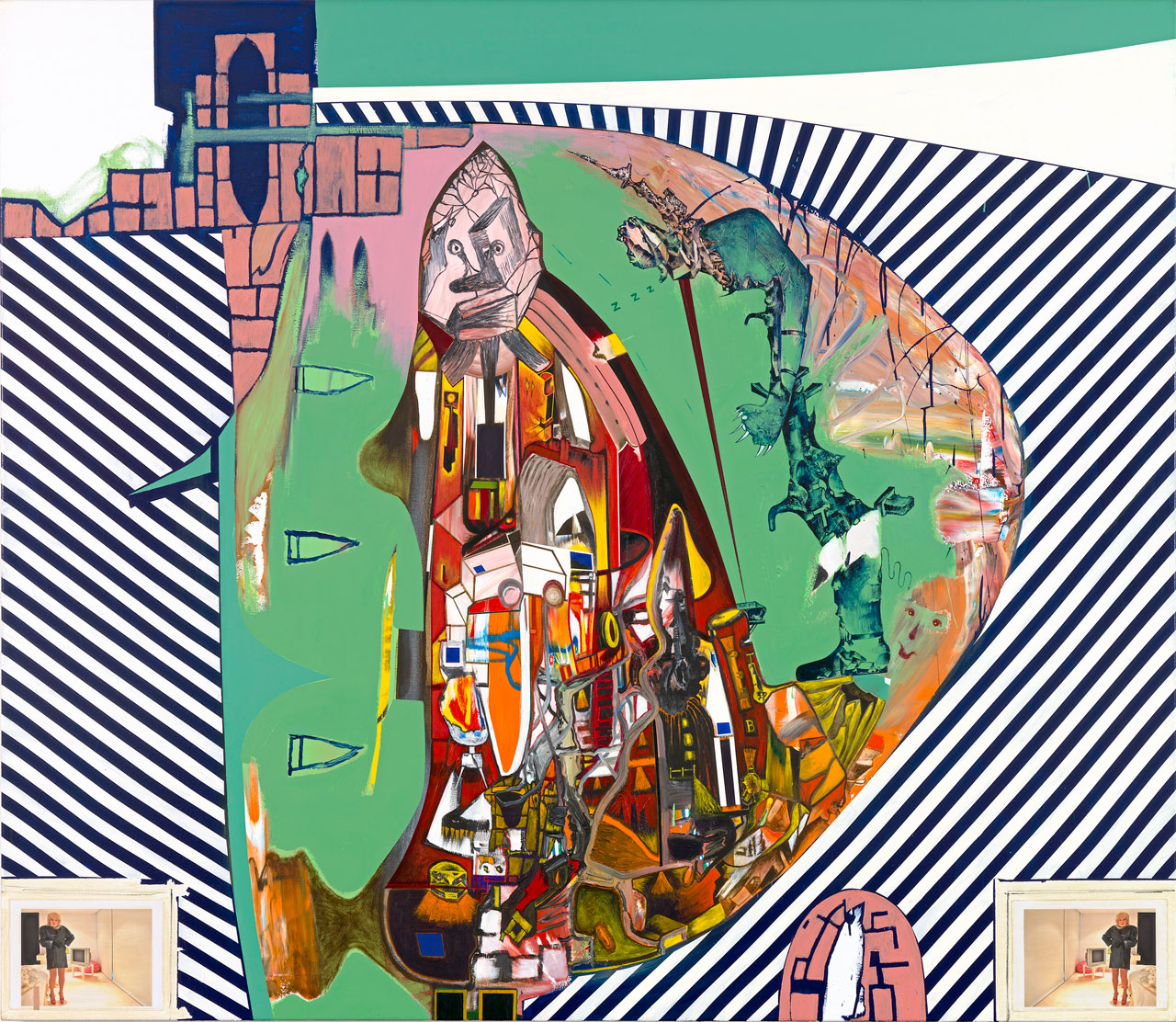 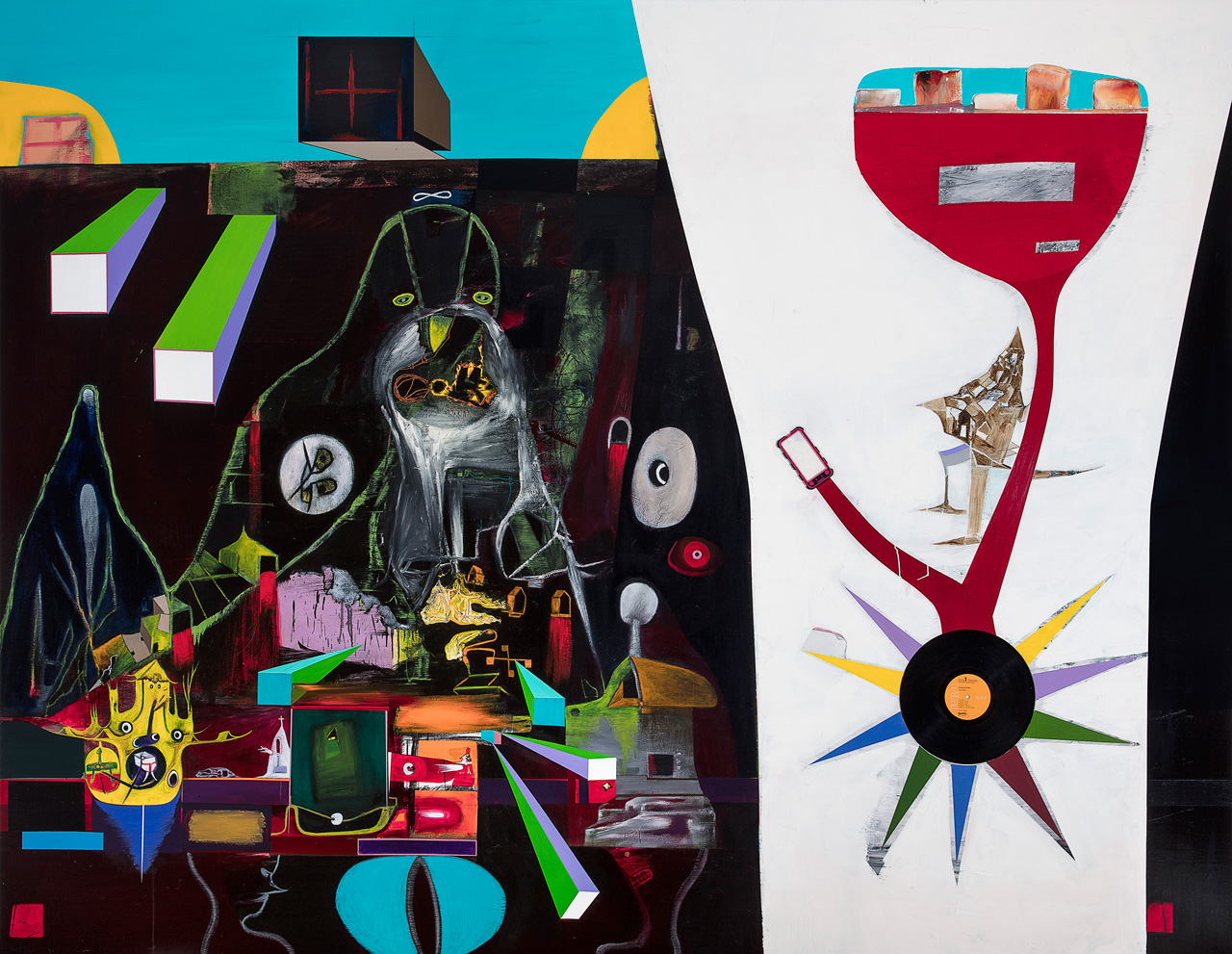 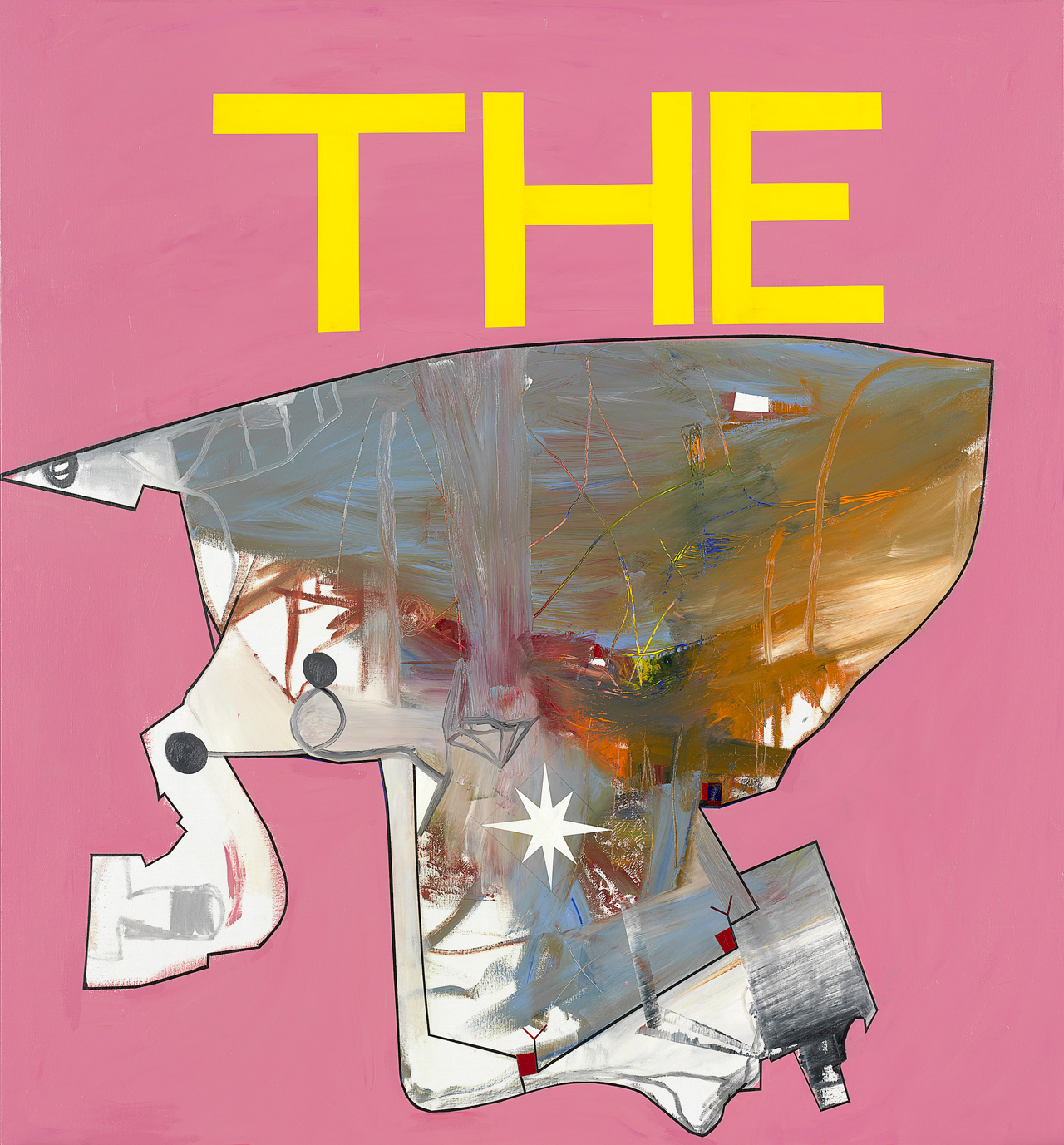 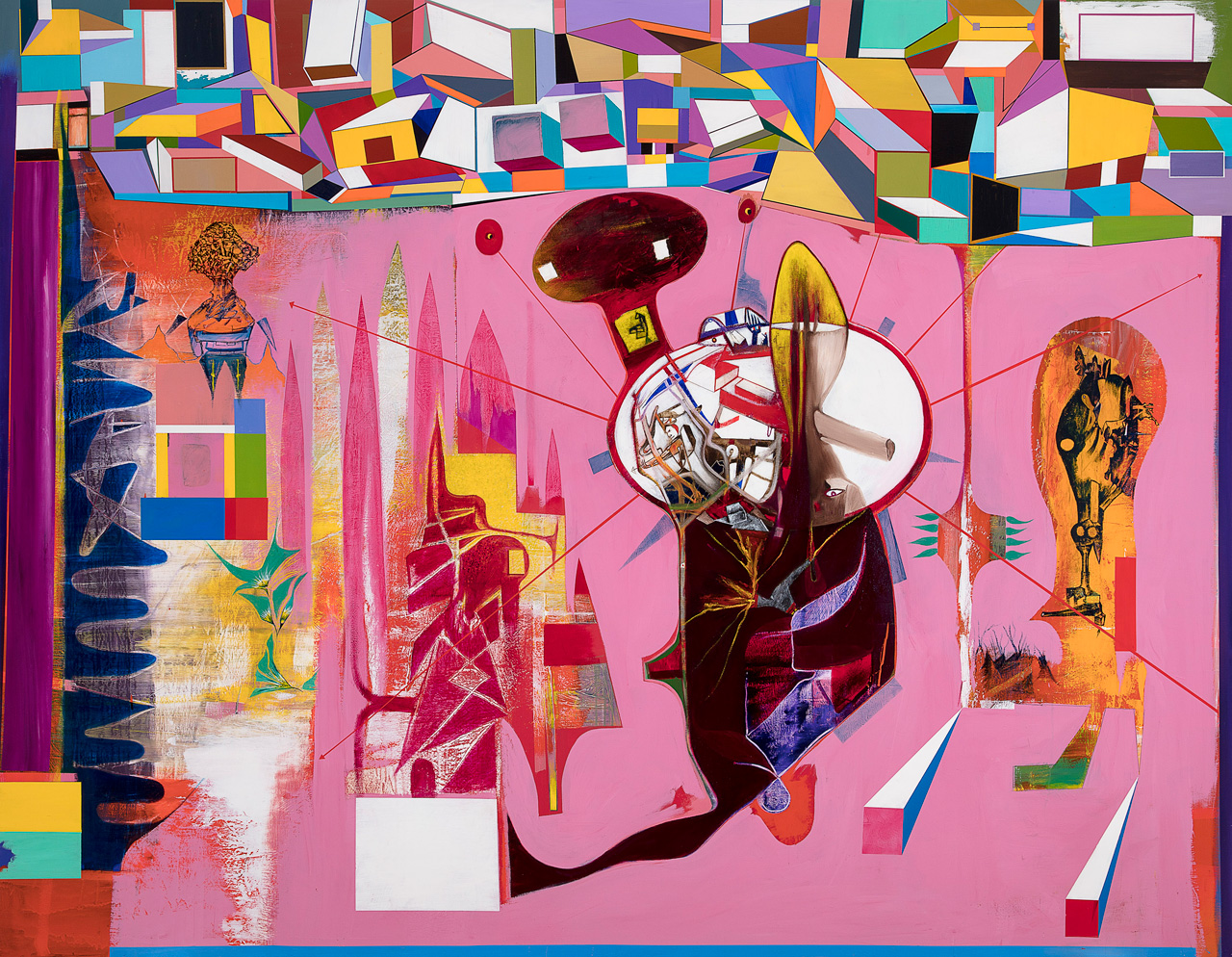 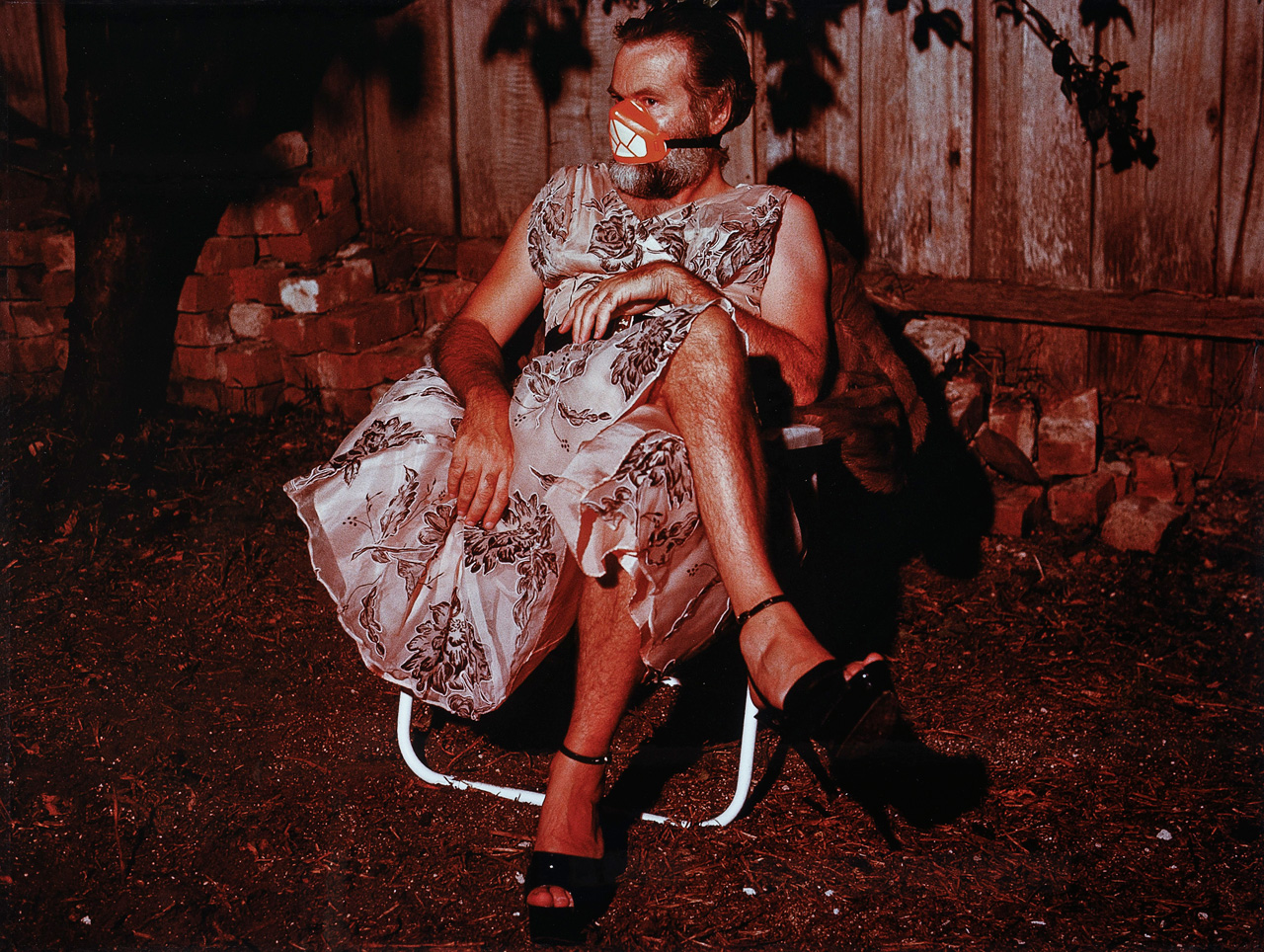 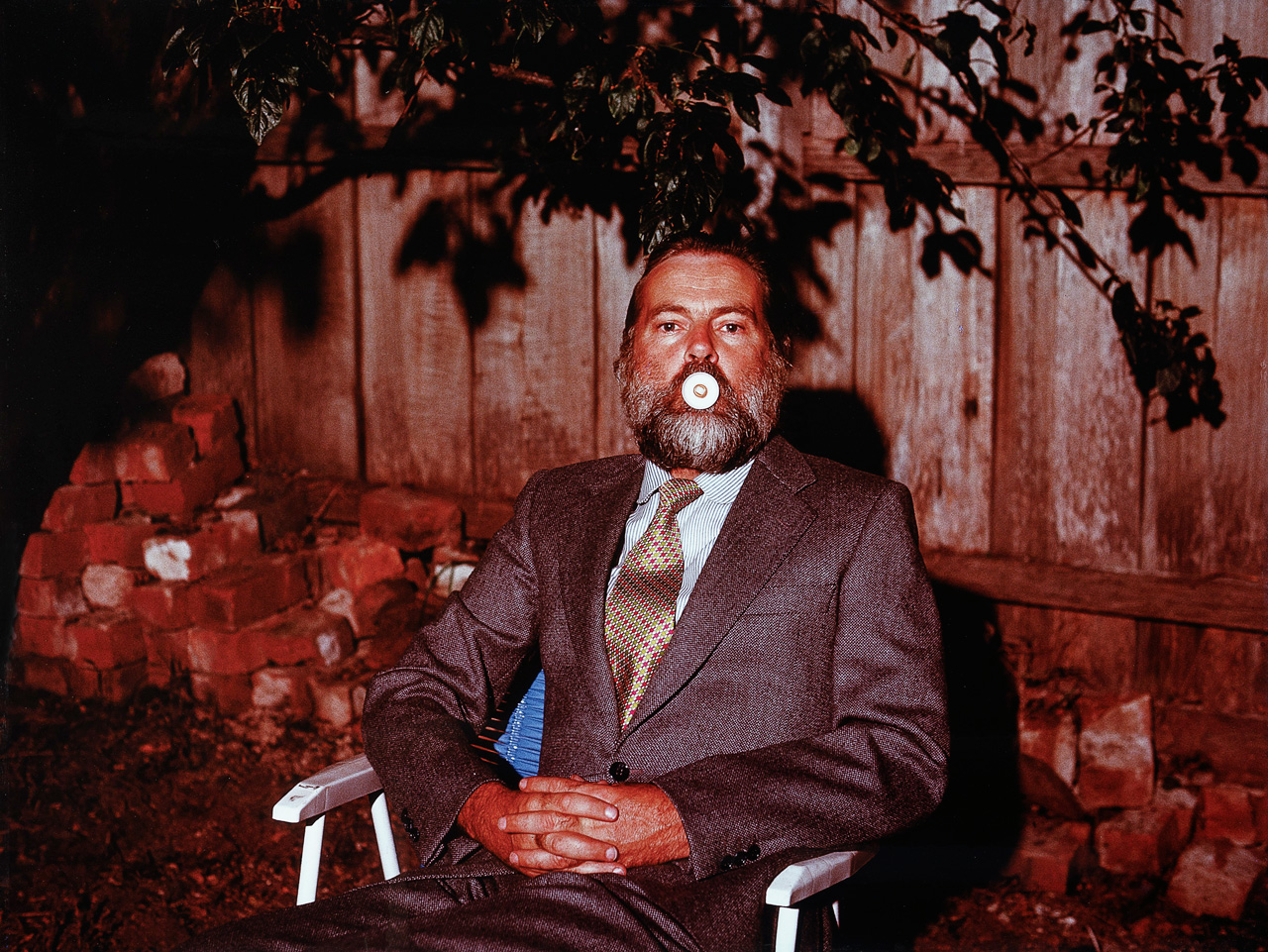 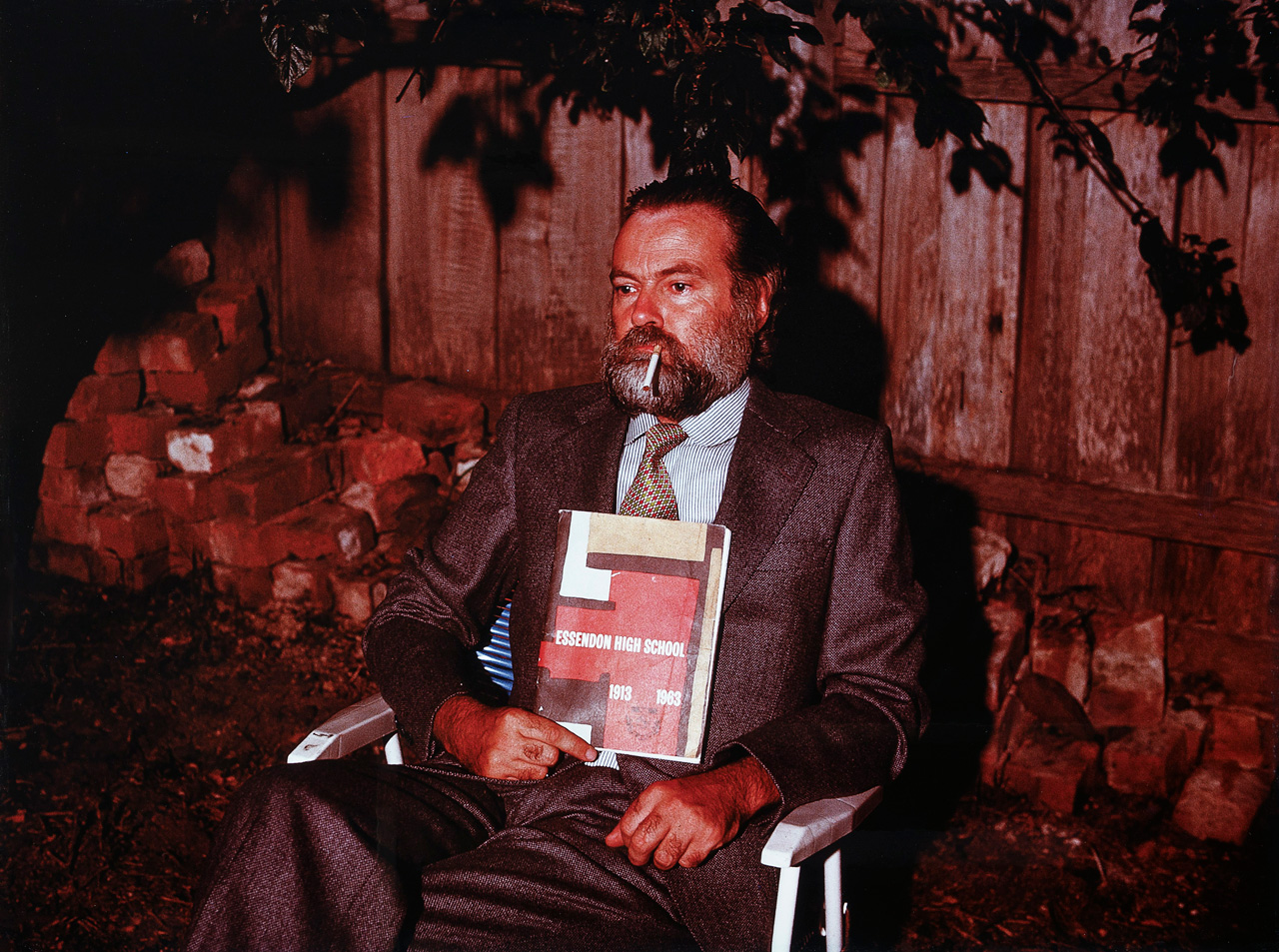 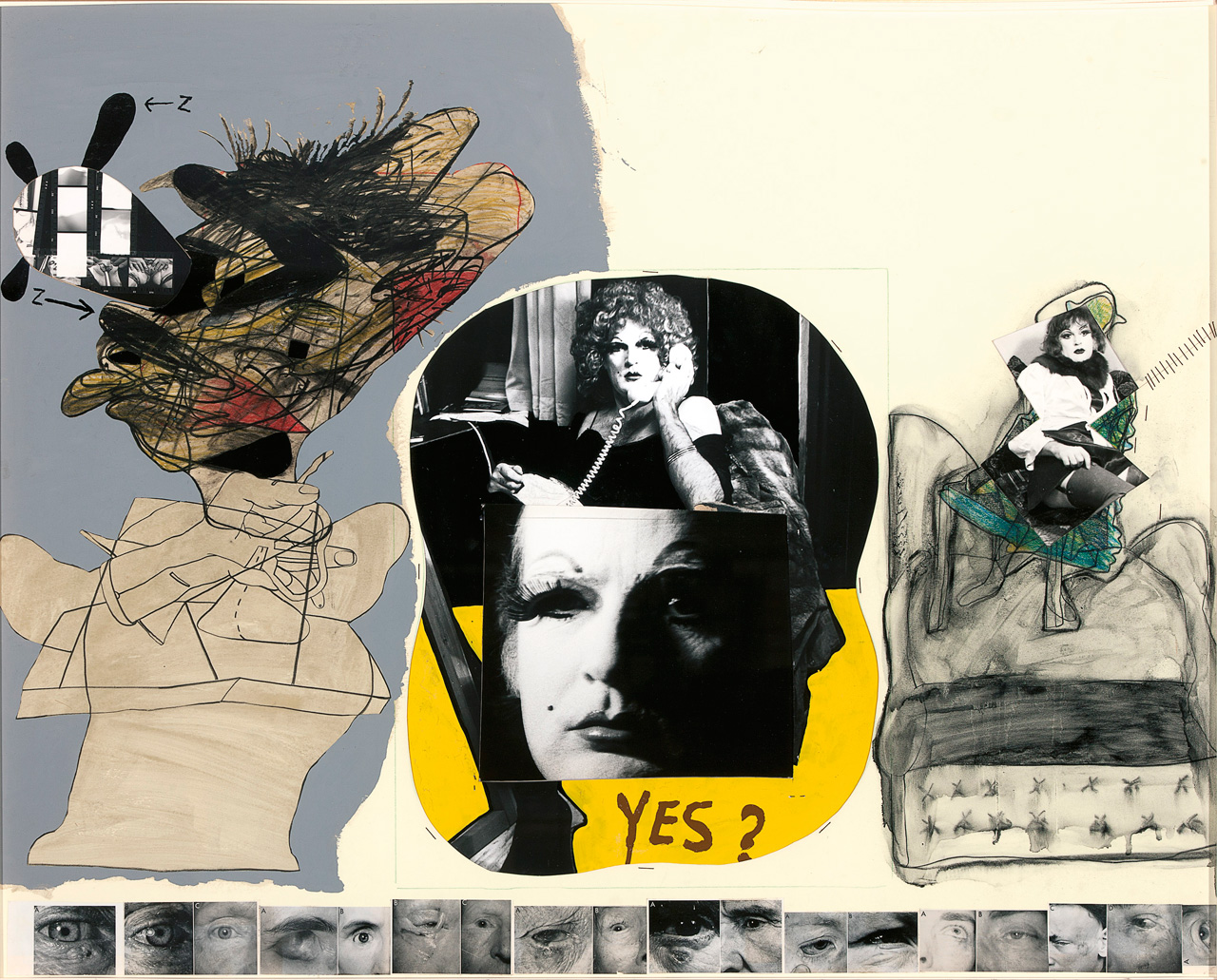 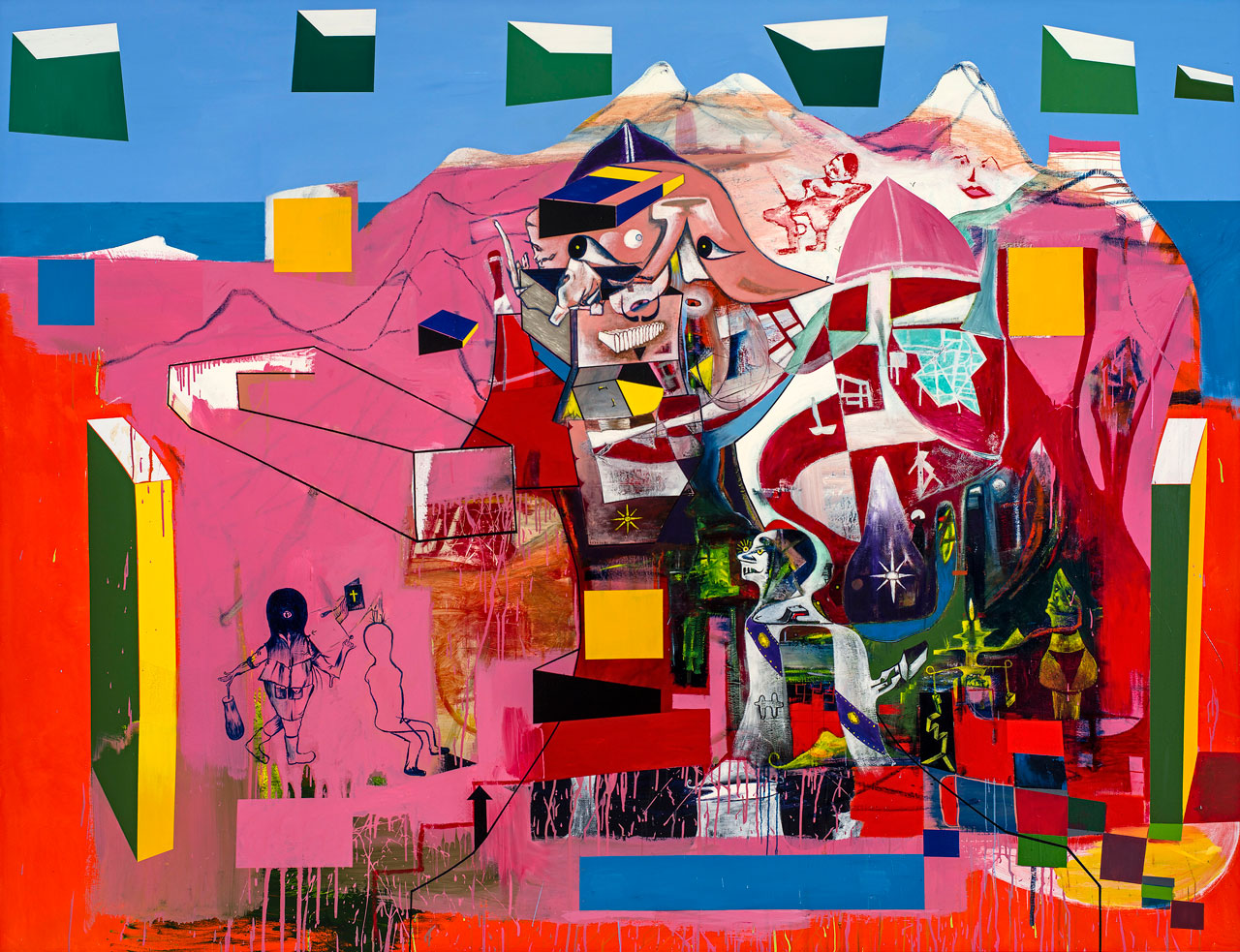 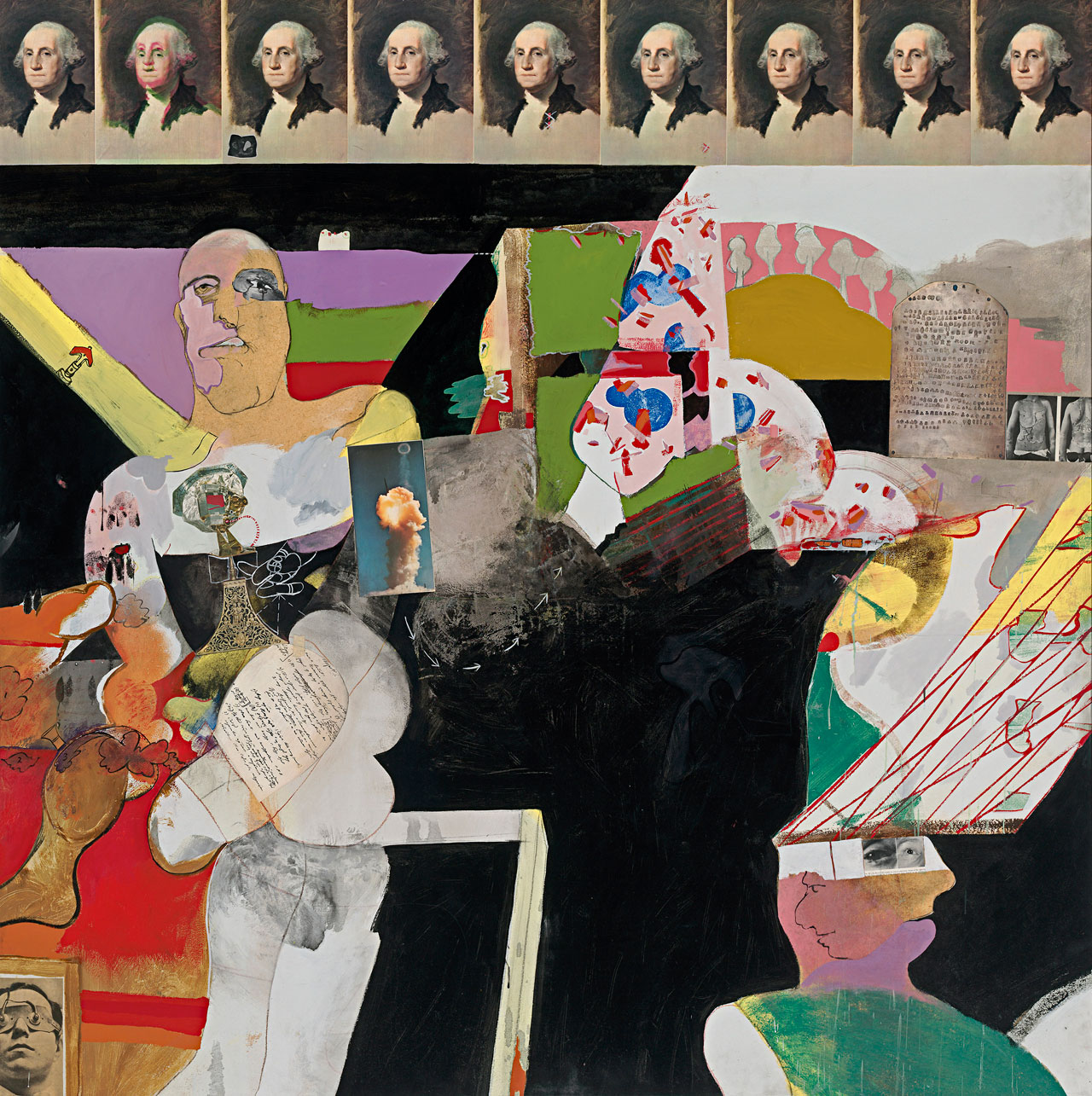 In the lower corners of the painting Bates Motel are two photographs of the artist Gareth Sansom in drag that, depending on your understanding of the art form, is either full realized or entirely amateurish.

The artist, considered one of the eminent painters of the Australian avant-garde for the last half century, staged the darkly humourous scene in a corner of his home in Melbourne, stripping back any signs of domesticity in favour of a semblance of the sparse motel room that’s pivotal to the story and legacy of Alfred Hitchcock’s seminal classic, Psycho. Though Sansom, who apparently often takes breaks from working in his studio to watch films, peppers many of his works with these kind of allusions to watershed moments in popular culture from the last fifty years, any suggestion that there’s a cogent narrative at play within the remainder of the work is quickly disarmed by the arresting visual onslaught taking place across his canvas. These are anarchic, playful works that oscillate between the grotesque and the divine. Their effect is to entirely immerse the viewer, each work prone to shock and delight in equal measure.

“Gareth’s recent paintings incorporate some of the boldest use of colour I can remember,” Simon Maidment, Senior Curator of Contemporary Art at the National Gallery of Victoria, recently told GRAZIA. “There are eye-popping pinks, for instance, where they have no right to be, and a dizzying array of block colour. In these works there are few tones or fades but instead each colour feels singular and pure, standing in contrast to the next. What’s going on in the picture is often mysterious, where creatures or faces emerge from architectures and text or graphic elements project across the picture frame, or take-over what would otherwise be a horizon. Sometimes titles refer obliquely to characters from pop culture, like the protagonists from films like The Shining or Psycho, and there’s a sense of foreboding that seems to fit, but any suggestion of a clear story or subject is usually confounded with all the other details in the picture. They are mysteries in other words, picture puzzles that seem to be closest to the depiction of chaotic dreams or internal worlds.”

The full extent of Sansom’s oeuvre was not revealed to Maidment until he commenced working on Transformer with the artist himself. Not unlike the experience of viewing one of Sansom’s singular works firsthand, the sheer scope of this body of work took Maidment by surprise. Transformer traces the career of Sansom, one of Australia’s most provocative artists, over a career that has spanned over 60 years. It’s the largest survey of the artist’s work to date, and includes over 130 works, including those on paper and photographs that complement some 50 of the artist’s luridly coloured paintings, collages and assemblages, many of which traverse and conflate lines of popular culture, art history, Australian vernacular, religion, mortality, sex and gender. That the exhibition takes its name from a painting titled Transformer, so named for the aberrant inclusion of a vinyl LP of Lou Reed’s iconic album of the same name, is indicative of as much.

The show, while large in its scope and sheer physicality, has been heavily edited from a selection of the work Sansom has produced over his career and is organised not as a chronological survey, but rather along thematic lines, material tendencies and formal characteristics. Maidment says he worked closely with Sansom on the process, with the artist himself also contributing objects and images from his studio and life outside his practice to “further confuse elements of biography, inspiration and theatricality”. That he should be so involved mirrors another important segment of the artist’s life thus far that is nearly indistinguishable from his practice. Sansom was once the Head of Painting and then Dean of the Victorian College of the Arts from the late seventies to the early nineties, after which time he retired to focus full-time on his practice; he also studied to be a primary school teacher while also at art school at RMIT himself. A hands-on approach, it seems, was inevitable.

“Gareth has been an influence over many generations of artists, as an outspoken practitioner and aficionado of painting and as an educator”, says Maidment. “His own works have always sought to buck trends and convention, so he’s often been valorised for that by other artists. I think what’s shocked some people who know him and his work, is how consistent it is – in quality and approach – when you bring it together in a single show that covers 53 years of work, somehow despite his renegade leanings.”

Included amongst Transformer is Sansom’s 2005 painting Sweeney Agonistes, a painting Maidment considers to be amongst the survey’s most powerful. The work is a triptych, a recurring formal device throughout the artist’s body of work, made in Sansom’s usual manner, which sees the artist paint directly onto the canvas unaided by any preliminary drawings or a fully-formed idea of where the process will lead him. Initially, says Maidment, Sweeney Agonistes was intended to be a single panel work, however as the image grew Sansom added two further panels. The finished piece measures in at “a hair under five and a half metres long [and] has a bright pink ‘ground’ and against it a large alien figure occupies each of the left and right panels, with a strange landscape and architecture in the middle panel, which also incorporates collage elements.” One such element is a photograph of the enigmatic figure of the late Sweeney Reed, the birth-son of artists Joy Hester and Albert Tucker and the adopted-son of the influential arts patrons John and Sunday Reed, who worked a gallerist and artist and whose death by suicide in his early 30s affected Sansom greatly. The painting’s title also refers to the publication of two texts by T.S. Eliot under the moniker Sweeney Agonistes: Fragments of an Aristophanic Melodrama, itself a reference to a John Milton play entitled Samson Agonistes from 1671.

“The play here between the subject Sweeney and the artist Sansom is typical of Gareth’s elusive and layered referencing,” Maidment explains of what makes the work such a sizeable accomplishment, dimensions notwithstanding. “It is left to the viewer to decide who the text on the left panel refers to when it states ‘LAST NEW YEAR’S EVE HE STAYED UP ALONE… SNIFFING AMYL’. It is a awe inspiring, bursting, painting, which [the eminent art critic] Sebastian Smee has dubbed ‘the greatest Australian painting of the past twenty years’.”

Gareth Sansom: Transformer is on now at The Ian Potter Centre: NGV Australia at Federation Square, Melbourne, Australia and will exhibit until January 28, 2018. Entry is free. Further information is available here.