Shaking any stitched-up expectations, avant-garde designers remind us that London has always been the fashion-renegade

On a world scale, it’s arguable that the most widely reported anything to come out of the UK on the daily is Royal Family-related. Brexit included. They have the ability to make headlines with the smallest of tea-cup-clinks, whether it be fact or fiction. In turn, this consumption naturally leads to the mulling-over of fashions of the Meghans and the Kates, until the whole country is rolled into an imaginary custom-made, A-line frock with sensible pumps and a sweet handbag.

But, then, like a giant anti-headline, along comes London fashion week. Shouting out the antithesis to stitched-up style (so to speak), shaking the pearl earrings and gabardine trenches from our expectations and reminding us that Londoners have actually always been the revolutionary, avant-garde, fashion-renegades among us.

Don’t get me wrong, wandering the streets of Notting Hill, in a crisp coat, a neat shirt and pair of heeled riding boots is up there with my top 10 fashion fantasies, however, it’s wholeheartedly refreshing to be privy to the autumn winter collections of Mary Katranzou, Halpern, Simone Rocha and newcomers 16Arlington as they revoke the establishment and revitalise some much needed artistic freedom-in-fashion. Rule Britannia!

The fabulous Ms. Katrantzou had a big year, last year. She dressed the likes of Beyonce, Adele and Cate Blanchett, was the collaborative brains behind a section of the Victoria’s Secret show and celebrated 10 years with an incredible solo exhibition in the US and London. It’s no wonder then, that her first collection of the new year is an explosive, celebratory exploration of colour and volume. Every piece was bursting with excitement, literally and figuratively. Colour-wheeled feathery frocks, ombré pinks and blues, psychedelic 90s fantasy prints, aquatic ruffles and geometric animal print mash-ups made up what Katrantzou explained to be her “imaginary universe”.

Decadent and regal but more than a little bit fallen, Simone Rocha’s decorated princess walked today in London. Known for her artistic take on the fashions of dynasties near and far, Rocha always delivers a sublime antidote to slick commercialism. And while this season is slightly more restrained than past, her looks today still happily dabbled in couture curiosity. Vintage-patterns of a prairie-nature were bastardised by uneven hems and sexy bustier overlays while layered petticoat dresses ranged from sheer to sheeny organza. Rocha’s anti-princess is both a welcome trend note (oversized Peter Pan collars are quickly becoming the season’s micro-trend) and an apt social comment. Her models (friends, family and of particular note actress Chloë Sevigny) were of all ages, shapes and sizes, giving proof to the obvious that the all-encompassing-femme era is quickly becoming a dynasty of its own.

“Why can’t a fish have wings?” Steven Halpern rhetorically noted to WWD post-show in London today. It would be a trippy, delightful sojourn, visiting his imagination. The designer is rarely muted by political rhetoric, instead preferring to up the sequin-ante when the chips are down. His autumn winter 19 collection is proof that Halpern has a secret stash of chips that never runs out. Today’s fantastical wonderland took a turn for Studio 54, or perhaps for a 1960s Carnaby Street, since we’re in London. Metallics in every possible colour glimmered via his obsession with crafty accoutrements. But despite the dreamy nature and all the sequins (or perhaps because of it?) the pieces were substantially wearable. Versace-esque golds swirled across 70s dresses, clashing against slinky halter-dresses replete with beaded chokers while party-happy strapless numbers shimmied over glittery tights and metallic platforms. The party is loud in Halpern’s world and the goers are lining up.

It may be their runway debut, but 16Arlington are no strangers to the fashion front line. Already favourites on the red carpet via A-listers like Lady Gaga and Rosie Huntington-Whitely, the creative duo of Marco Capaldo and Frederica Cavenati are hitting their wacky stride. Their autumn winter ’19 collection, inspired by famed pop-artist Richard Linder, is an embellishment-happy, feather-friendly quirk-a-thon. With a vivacious likeness to other cult brands like Australia’s Discount Universe and Romance Was Born, 16Arlington are coming of age in the Instagram era, and it shows. Costume-punk suiting, clashed-up-notice-me leather outwear and of course, their hair-raising sequin-jungle pieces all made for a firework of bygone ultra-glamour. 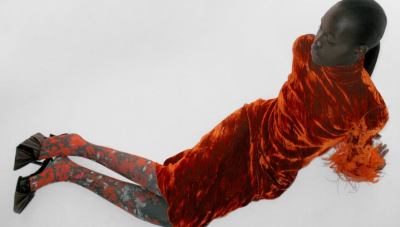