All she's missing is the pink Lamborghini.

The power suit and, by extension, the shoulder pad, is having a spotlight moment right now. We recently saw Gigi Hadid rocking a forest green blazer on the streets of Paris for fashion week, and now, Kim Kardashian has thrown her hat into the ring. She is currently in New York City rehearsing for her debut host gig on Saturday Night Live, and when in New York City, you have to make a fashion statement.

So, if you saw a flash of bright pink yesterday, you’re in luck because you spotted Kim K! She wore an electrically pink suit coat that was ever so tailored to her figure and hit about mid-thigh length.  The coat featured a masculine neckline and exaggerated shoulder pads that had a slightly curved point to them. And while the coat was definitely a moment, so weren’t the boots that Kardashian opted for, or would you call them pants?

The lower half of Kardashian’s outfit morphed a high-heeled boot into pants, as there was not really a clear defined line between the two articles. They were made of a sheer, vinyl-like fabric that contrasted against the felt-like fabric of the jacket. She accessorised the look with a tiny silver purse that had plenty of glitz, and a pair of chunky silver hoop earrings. To finish it all off, a pair of bright pink gloves.

As Kardashian left the SNL rehearsal she made a slight adjustment to her outfit. Weather is in fact getting colder, and we’re definitely going to start to see layers become more popular as the fall progresses, but last night Kardashian really took the plunge. She can be seen in an extremely oversized and puffy maroon trench coat with a purple hood and black gloves. I guess fall in New York City is pretty cold when you’re used to the Calabasas heat. 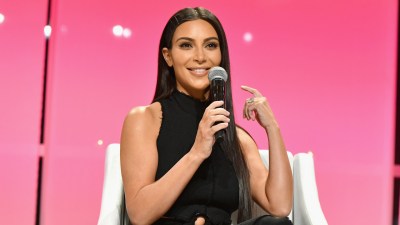