But she's not giving up yet

Kim Kardashian has been vocal on her goals to become a lawyer. Unfortunately it seems not all is going to plan with the reality star revealing on an upcoming episode of Keeping Up With The Kardashians that she failed her first major exam. Speaking to sisters Kourtney and Khloe Kardashian, Kim said, “So you guys, I did not pass the baby bar.”

“I am a failure,” she continued. “I spent six weeks straight, 10 to 12 hours a day, studying and it was so important for me to take this. And to not pass gets your spirit down and just makes you want to give up.”

Kardashian is taking an alternative route to receive her qualifications that requires a four-year program as opposed to the traditional three-year degree. She explained on the reality show that after the first year she is required to pass the “baby bar”.

“If you are doing law school the way I’m doing it, it is a four-year program instead of your typical three-year program,” Kardashain says. “And after year one, you have to take the baby bar. This would actually harder, I hear, than the official bar.”

In a flashback, Kardashian’s mentor, attorney Jessica Jackson, explains that she needs a score of 560 to pass the first year law student exam; she received a mark of 474 on her first attempt. “That is extremely close on a test that most people are not taking in the middle of a pandemic,” Jackson tells her.

Kardashian is preparing to take the test again. In an Instagram Q+A following the episode, one follower asked: “How are you finding the bar exams?”

The 40-year-old responded, “Extremely difficult. Unfortunately I haven’t passed yet but I’m not giving up and I’m preparing to take it again soon.”

In April 2019 Kardashian first revealed she was studying.

“I’ve seen some comments from people who are saying it’s my privilege or my money that got me here, but that’s not the case…The state bar doesn’t care who you are,” Kim captioned. “My weekends are spent away from my kids while I read and study. I work all day, put my kids to bed and spend my nights studying. There are times I feel overwhelmed and when I feel like I can’t do it but I get the pep talks I need from the people around me supporting me…It’s never too late to follow your dreams.” 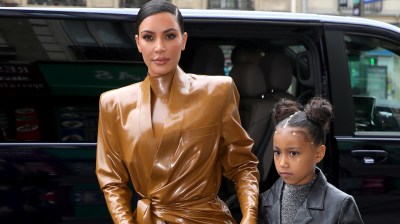