Keeping Up with Kravis

Kourtney Kardashian and Travis Barker’s whirlwind romance been the ultimate pandemic turbo relationship—a term used to describe couples who got together during Covid-19—going from zero to 100 in a matter of months, complete with PDA, gushy Instagram posts and even tattoos.

At this point, it wouldn’t even be surprising if an engagement came soon.

But this past week, Kravis—as they’ve been dubbed by fans—has had their romantic whirlwind tour of Calabasas was interrupted by rumours circulated by the Blink 182’s ex-wife, Shanna Moakler, who alleged he’d once hooked up with Kardashian’s sister, Kim.

First, passages from Barker’s 2015 memoir resurfaced, in which he wrote at the time that his now girlfriend’s younger sister was “f–king hot,” admitting, “I kept on secretly checking out Kim,” per Us Weekly.

The gossip was then further fueled by alleged screenshots that Alabama Barker, the 15-year-old daughter of Barker and Moakler, posted on her Instagram Story of an alleged message from her mum, which claimed she “divorced Travis because I caught him having an affair with Kim. Now he’s in love with her sister.”

Addressing the rumours head-on, Kardashian responded to a fan’s question on Instagram on Wednesday night, who asked, “Did you hook up with Travis Barker?”

In response, Kardashian wrote, “NO! False narrative! We’ve been friends for years and I’m so happy for him and Kourt.”

Meanwhile, Moakler, who divorced Barker in 2008, told People earlier this month that she thinks the PDA between her ex-husband and Kardashian is “weird,” but otherwise has “no ill will” for the Poosh founder.

“The movie, True Romance, that I feel like they’ve been bonding over was the theme of our wedding,” she told the outlet. “Our daughter’s named after the character in the movie,” she said. Before adding, “I’m really, genuinely happy for him. I want the father of my kids to be happy and to have a partner that makes him happy… and a better father.”

She added, “My kids seem to really like her and her family, so that’s key.” 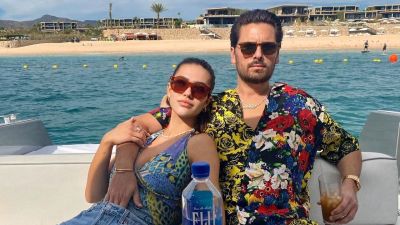 Are Irina Shayk And Kanye West Dating?
Next page