O.J. Simpson Keeps Up With The Kardashians in Prison After serving nine years of a 33-year sentence, can you even believe O.J. Simpson is set to appear before a Nevada parole board on July 20 to plead his case for freedom? If parole board members approve of the 69-year-old’s appeal, he could walk out of prison on October 1, 2017.

Now, we have a little bit of insight into how Simpson has been holding up in a jail cell. Rumours of special treatment have swirled since the beginning of his incarceration and a former prison guard has told Inside Edition that the accused founded a new favourite television show while behind bars: Keeping Up With The Kardashians.

“He likes to keep up with all the gossip with them,” the source said. Of course the Kardashian patriarch, Robert (who is now deceased), was Simpson’s lawyer during his trial where he was accused of killing wife Nicole, along with 12 other charges including kidnapping and armed robbery. The relationship between Simpson and Kardashian was brought back into the spotlight recently when The People vs. O.J. Simpson: American Crime Story aired and David Schwimmer played Kardashian. Simpson has reportedly not seen this television show as “the prison doesn’t get the FX network.”

Simpson reportedly watches the ventures Kim, Khloe, Kourtney, Kris, Kendall and Kylie from his 13-inch flat screen TV screen in his cell – a privilege not every prisoner has. “They told me what was expected of me here and I gave them my word that I would try to be or would be the best prisoner they’ve ever had here and I think for the most part I’ve kept my word on that,” Simpson told the parole board in 2013.

We’ll check back in with you come July 20. 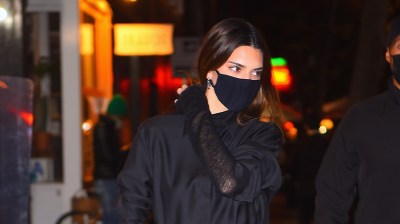