Keanu Reeves Debuts His Girlfriend On The Red Carpet

In news that will disappoint thousands of women around the world, Keanu Reeves has a new girlfriend. Her name is Alexandra Grant and she’s an LA-based artist and philanthropist. She’s also known Reeves for at least a decade.

The actor and artist made their first official public outing on Saturday night the LACMA Art + Film Gala, presented by Gucci, in Los Angeles.

They held hands on the red carpet and looked pretty adorable. Grant, 46, wore a navy silk gown and Reeves, 55 a three-piece suit (probably from Gucci?)

According to Grant’s professional website, she,  “through an exploration of the use of text and language in various media—painting, drawing, sculpture, film, and photography—probes ideas of translation, identity, dis/location, and social responsibility.”

“Grant frequently collaborates with other artists, writers, and philosophers, often going so far as to have specific texts written as the impetus to her intricate paintings and sculptures. She has collaborated with author Michael Joyce, actor Keanu Reeves, artist Channing Hansen, and the philosopher Hélène Cixous, amongst others.”

Reeves and Grant teamed up for their first project, a book called Ode to Happiness, in 2011. In an interview with the Guardian, Reeves explained the genesis of the book. “I was in my kitchen hanging out with my friend Janey [Bergam, a mutual friend of Reeves and Grant and the editor of their book], and the radio was on – and this station was playing, like, an orgy of depressing, self-pitying, nostalgic music. You know: ‘I’m so lonely and I’ve been left and my heart is broken.’ It was so voluptuously horrible. And I just started to write on this piece of paper, because I had this image of, you know, that moment when you take that bath, you light that candle, and you’re really just kind of depressed. And it was making Janey laugh so hard, I just kept going, piling on the self-pity.”

While Saturday might have marked their first public outing, we feel like Reeves and Grant may have been an item for some time. Check out this pic of them in 2016.

And they’ve been working together closely since that first book, releasing another and launching X Artists’ Books in 2017.

This may not be the beginning of a happy relationship, but for their sakes we hope it’s a long one. We’re also here to offer Keanu a shoulder to cry on should things not work out, because hey, we’re nice like that. 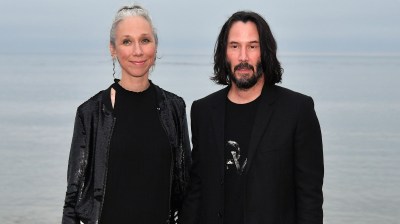 Keanu Reeves’ Girlfriend, Artist Alexandra Grant, Continues To Be Too Cool For Us All
Next page