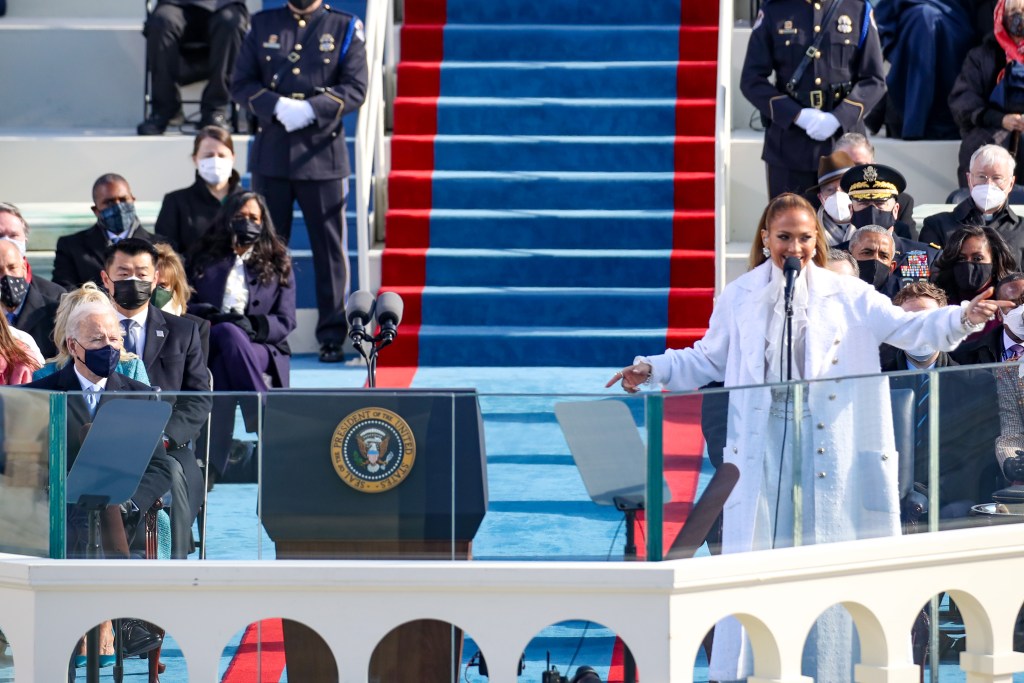 On Wednesday, January 20, Jennifer Lopez delivered one hell of a patriotic performance during the presidential inauguration of Joe Biden from the West Front of the U.S. Capitol in Washington, D.C..

The American icon sang a touching rendition of Woody Guthrie’s classic folk song This Land Is Your Land” and “America The Beautiful. Just before singing her last note, the Puerto Rican superstar recited the closing lines of the Pledge Of Allegiance in Spanish — “Justicia para todos!” — and stated emphatically “Let’s get loud!” a nod to her hit single. Her fiancé Ale Rodriguez was in attendance and proudly cheered on the national treasure.

Following the stunning performance, Minnesota Senator Amy Klobuchar quipped that it was the first time in history that J. Lo was the opening act for Chief Justice Roberts. 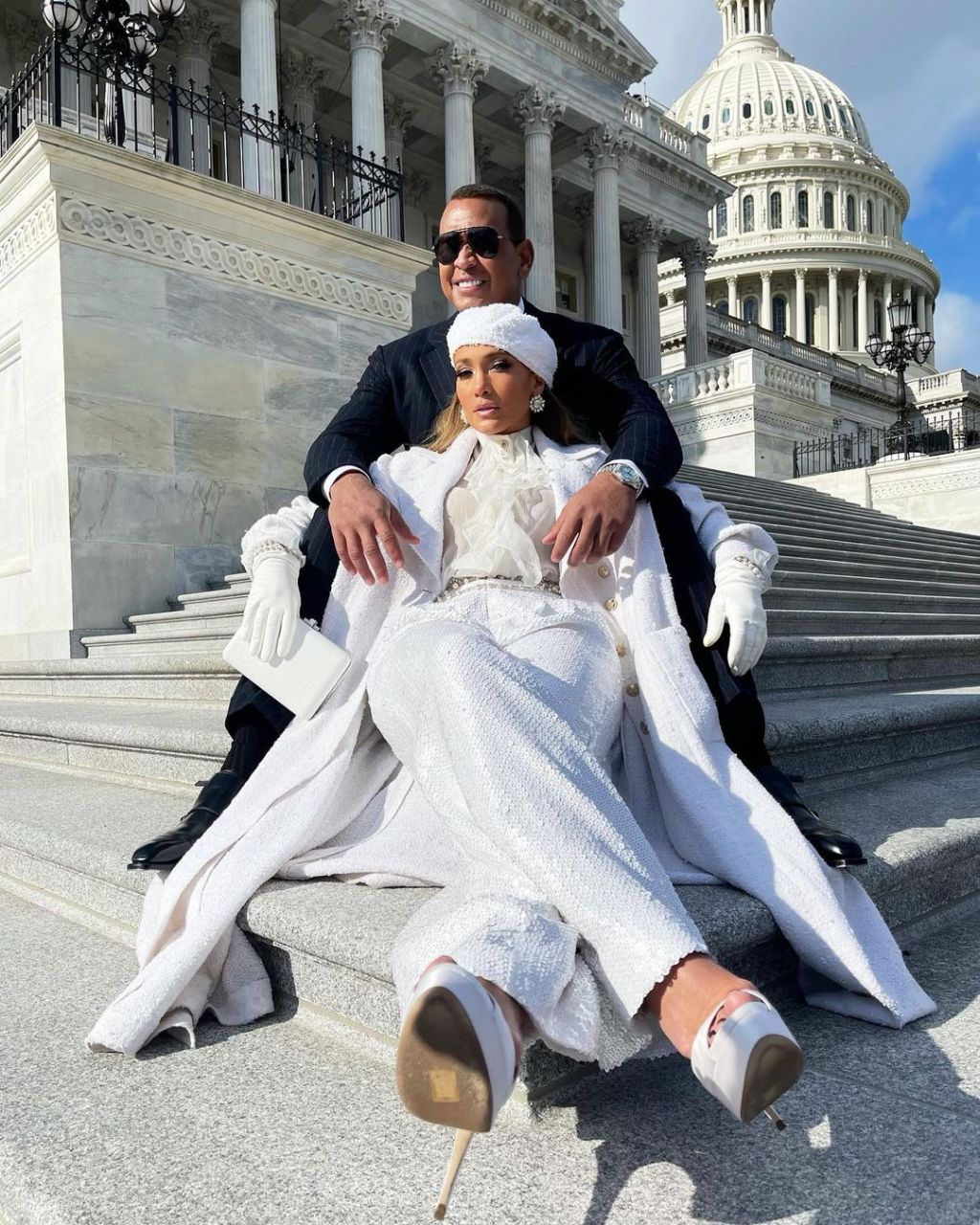 For her big moment, the flawless 51-year-old donned an all white head-to-toe Chanel ensemble, which included a long winter coat worn over a pair of glittering white pants and a ruffled blouse. She accessorised with oversized sparkly earrings and stacks of pearl bracelets. The white colour choice was likely a nod to the suffragettes whose movement led to the ratification of the 19th Amendment in 1920, which granted women the right to vote. Now Vice-President Kamala Harris famously wore an all white suit Harris’ during her and Biden’s victory rally back in November.

Suffragette white has been a popular style throughout major moments in politics. Hillary Clinton wore white when she accepted the nomination for president at the 2016 Democratic National Convention in honour of the women’s suffrage movement. Geraldine Ferraro also wore white when she accepted the nomination to become the first female candidate for vice president for a major American political party at the 1984 Democratic convention. In  February 2020, female Democrats in Congress made a point of wearing white to mark the 100th anniversary of the women’s vote during President Donald Trump’s State of the Union address. At 12 p.m. ET, Biden was officially sworn in as the 46th President of the United States. Harris also made history becoming the first woman, first Black person and first South East Asian American to serve as Vice President of The United States. She was sown in by Supreme Court Justice, Sonia Sotomayor, and a fellow former prosecutor and the first Latina Supreme Court Justice.

The event was attended by former presidents George W. Bush, Bill Clinton and Barack Obama and their spouses as well as outgoing Vice President Mike Pence. Breaking from tradition, outgoing President Donald Trump, who recently became the first U.S. president in history to be impeached twice, did not attend. One thing that was missing from the day was the crowds, Between the ongoing COVID-19 pandemic and the insurrection at the U.S. Capitol by a mob of Trump supporters on January 6, Americans were encouraged to tune in virtually. 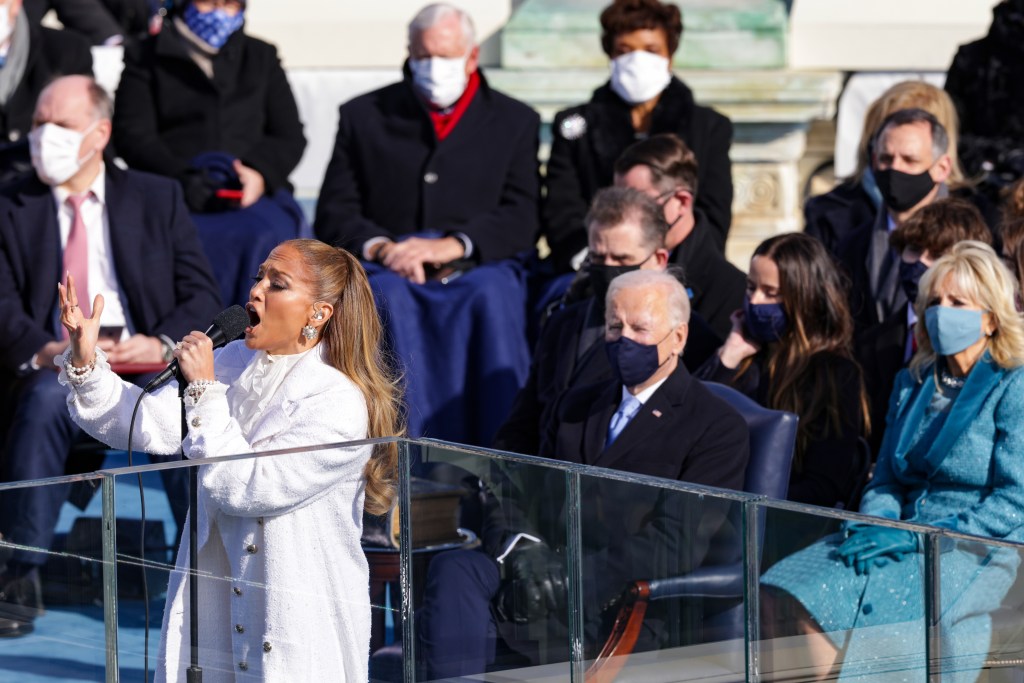 J.Lo was hardly the only powerhouse performance of this historic Inauguration Day. Lady Gaga kicked off the ceremonies singing the national anthem white country star Garth Brooks also appeared on the steps of the Capitol singing “Amazing Grace.” Later this evening, Justin Timberlake, Jon Bon Jovi, Demi Lovato and Ant Clemons, will also perform on the Inauguration Day prime time TV special, Celebrating America. The 90-minute broadcast will be hosted by Tom Hanks and air on ABC, CBS, NBC, CNN and MSNBC at 8:30 p.m. ET. Viewers can also tune in to the Presidential Inauguration Committee’s social media channels in addition to certain streaming and cable platforms.