The world collectively lost the plot last week when photos emerged showing former Hollywood golden couple, Jennifer Aniston and Brad Pitt, embracing at the SAG Awards after their respective wins: Pitt took home the Outstanding Performance By A Male Actor In A Supporting Role for his role in Once Upon A Time In Hollywood while Aniston won Outstanding Performance By A Female Actor In A Drama Series for her role in The Morning Show.

The now-viral images show Pitt’s hand holding Aniston’s arm as he catches her walking off stage after her acceptance speech, which he adorably watched from backstage.

Of course, the reunion prompted the internet to go wild with people speculating about whether there could be any romantic future for the actors, given they’re both currently single after coming out of their second marriages – Pitt with his ex-wife, Angelina Jolie, and Aniston with her ex-husband, Justin Theroux.

But apparently, Pitt has somehow been blissfully unaware of all the commotion surrounding his love life and left hand. Entertainment Tonight asked the actor what he thought about the internet’s frenzy over his and Aniston’s big moment and he replied, “I don’t know. I’m blissfully naïve and I’m gonna stay that way,” adding that he hadn’t read the headlines.

Now we’re just going to move along from the how element of Pitt avoiding the headlines and instead focus on whether we can hold hope for a Brad and Jen 2020 revival: apparently not.

According to a new report, Aniston has friend-zoned her ex-husband, despite him making it clear to her that he is sorry for the way he acted in the past. “Brad is completely sober now and is in such a different place than he was when they were together,” a source told Entertainment Tonight. “Brad is truly an introspective guy who has worked hard on himself. He has apologised to her for many things he felt were his issues in their relationship.”

They continued, “He truly takes ownership for his mistakes and that has changed their relationship with each other today. They both have moved on.”

“Right now they just love and adore each other and have been much closer friends since their divorces,” a second source told ET of Jen and Brad. “They have a very mature relationship that has evolved over time because they both have experienced marriages that didn’t work out.”

Of course, the SAG Awards wasn’t the first time the exes have seen each other lately – Pitt attended Aniston’s 50th birthday party in February 2019 and he also attended her annual Christmas party in December.

With Gwyneth Paltrow and Chris Martin and now Brad and Jen, Hollywood is a lesson in consciously uncoupling and staying friends afterwards. 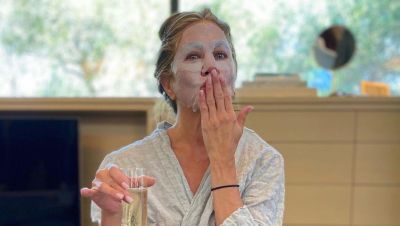