JACQUEMUS JUST MADE US BLUSH

Why we want to be Jacquemus's "La Bomba" “I don’t think I ever saw my mother more beautiful than on evenings after the beach and probably when she was in love. Evenings when we would go for a walk around the port, past the souvenir shops filled with earrings, ceramics, sarongs and headbands. That’s the woman I wanted to talk about this season. ‘La bombe’, as we say in the South.”

For Simon Porte Jacquemus, this woman – one of vertiginous light and beauty – was to be the catalyst for his Spring Summer 18 show. A show which opened Paris Fashion Week, a show of profound beauty and quirk, a show, as always, for his mother, Valérie.

The French wunderkind – from a quaint village on the flanks of Marseille – once again wore his wandering heart on his sleeve, albeit a more tapered sleeve this time around. As always, the South of France and his late maman would be the stimuli for the self-taught designer, however his latest Parisian offering was a slight detour from the aesthetic we’ve come to know, and in turn adore, of Simon Porte Jacquemus.

Stiff white poplin and lofty wool were replaced with swathes of sheer silk and raw linen. There were broad abstract strokes and a muted palette (a far cry from the candy pop and squeeze of mustard of the previous season). The rigidity of textures past forgone, but the theatrical silhouettes not (wholly) forgotten.

Form was indeed more streamlined; sybaritic shapes were muffled, albeit slightly. Straps were slender, silk was gauzy, shoulders were bare. It was pared back and refined, but it was sunny. And whilst the hot Sud de France wind changed slightly, the folkloric tropes of Southern France were not lost. A universe punctuated with creamy sunlight and salty air, the collection was one of warm skin, rumpled hair, sticky wine, flushed cheeks. Memories of his beautiful mother played out – bulbous ceramic earrings, tied pareos, headscarves, the rosiness of naïveté. “My mother was very warm, and also a bit childish in the way she would wear big pantaloon trousers or granny dresses. Without any money, she could look very special and artistic. She wasn’t ‘French chic’. She was too smiley for that, with her shiny eyes and shiny persona,” Porte Jacquemus had recently told AnOther. And today, the brand represents nothing less than this shininess and quirk, this strong yet smiley woman. Much like those rather oddly curated objects of immense commercial appeal – the abstract pumps with those irregular beats, the upside down handbags, the nano purse with disproportionate handle – this new topsy turvy world of Jacquemus worked once again in strangely synchronous harmony. It is a world which appeals to both the filles du jour – long-limbed, annoyingly unkempt, gloriously nonchalant – and the oft shrewd, sometime censorious bastions of the industry.

Despite the brand’s adolescence, it has already developed a now iconic accessory: the wide-brimmed straw sunhat – incredulously oversized, glamorous, unmistakably French. There has been no shortage of the hair accessory and namely the hat, but it is Jacquemus’s impish, exaggerated take – of course, very much in keeping with his play on proportions – which has seen the subsequent mimicking of and cemented its place in the circuit of summer hits. Reminiscent of his conceptual rigour, this now signature spin on sun smartness was riffed once more, this time even larger, even bolder, even more playful; with movement and newfound folds. Matisse has been noted as an artful muse, evinced in the abstraction of the collection as a whole; from mismatched earrings and heels to the asymmetrical cuts of cloth, and even beauty. Beauty, too, was slightly askew, it wasn’t so much slap-dash as it was imperfect, childish and naïve in its articulation, beautifully round with youth.

Vivid nostalgia was told not only through soft drapery and exposed backs, but through skin, namely cheeks, and the rosiness redolent of summers in love and too much wine. Blush has certainly been a re-emerging trend this year, but Jacquemus’s iteration was a slightly different one: soft, full and beautiful, it was so very French, and so very youthful. It was soft around the edges, draped in sweeping circles around the entire cheek, the roundness of youth deftly told by L’Oreal Paris’ Dick Page. Jacquemus’s girl was flushed, dewy, and of course, pretty. “It’s a very healthy, radiant, very fresh girl,” Page said backstage. The trick in le cheek was not however any kind of blush, it was lipstick. “There’s a custom colour for each girl, we’re using four different lipsticks which we’re combining. There’s a base lipstick colour for every girl, Ud Obsession. But I’m adding the same colour to the cheek and blending together.” The four lipsticks were none other than L’Oreal’s Color Riche, in shades Brick Vintage, Borèal Tafetta, Mon Jules and Ud Obsession.

Skin was kept “very warm,” and it was this warmness, this sun-drenched homage to his mother, which was so palpable on model skin. It was the skin we want in summer. The skin stuff of dreams.

Eyes were kept minimal, “a little bit of black kajal to the eyes which is buffed down and grooming on the eyebrow, but everything’s very clean, everything’s very, very real.” French innocence captured afresh with sex, salt and sand: “Simon’s inspiration has come from his usual South of France, and this warmth, this  sensuality, we want the girls to reflect that. To look very vibrant, very alive, very healthy, super, super fresh,” just like his mum. As always, a collection about his mother, for his mother. Here’s to you Madame Jacquemus and your shiny eyes. The original ‘la bomba’. 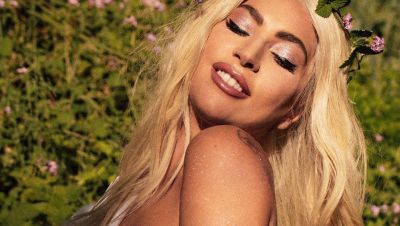 Lady Gaga Is Doing Her Makeup In Quarantine, Just ‘Cuz 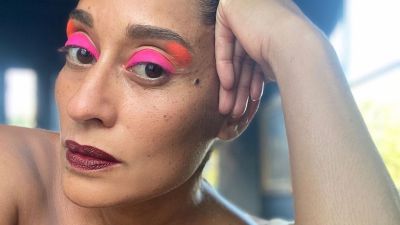 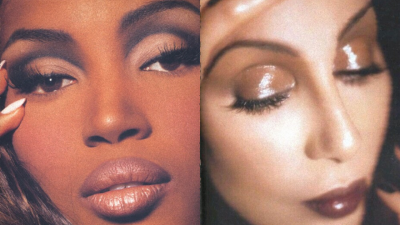 Naomi, Cindy And Cher. A Look At Kevyn Aucoin’s Most Iconic Makeup Looks 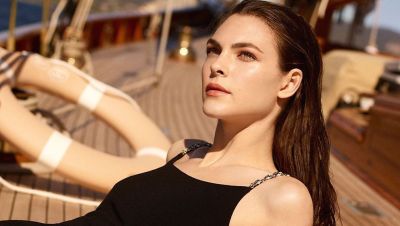 Review: Chanel Les Beige Sheer Highlighting Fluid Is Like Good Light In A Bottle
Next page