I never thought the first time I would attend Roland Garros was in an Anna October mint jumpsuit, Row cone heel and Rejina Pyo micro bag. But then again I never thought I would be attending the venue for fashion week, either. Instead of watching Nadal claim his 13th French Open Championship or Tsitsipas challenge the en tout cas King, I was there on the final day of Paris Fashion Week watching another champion of the court, Lacoste. 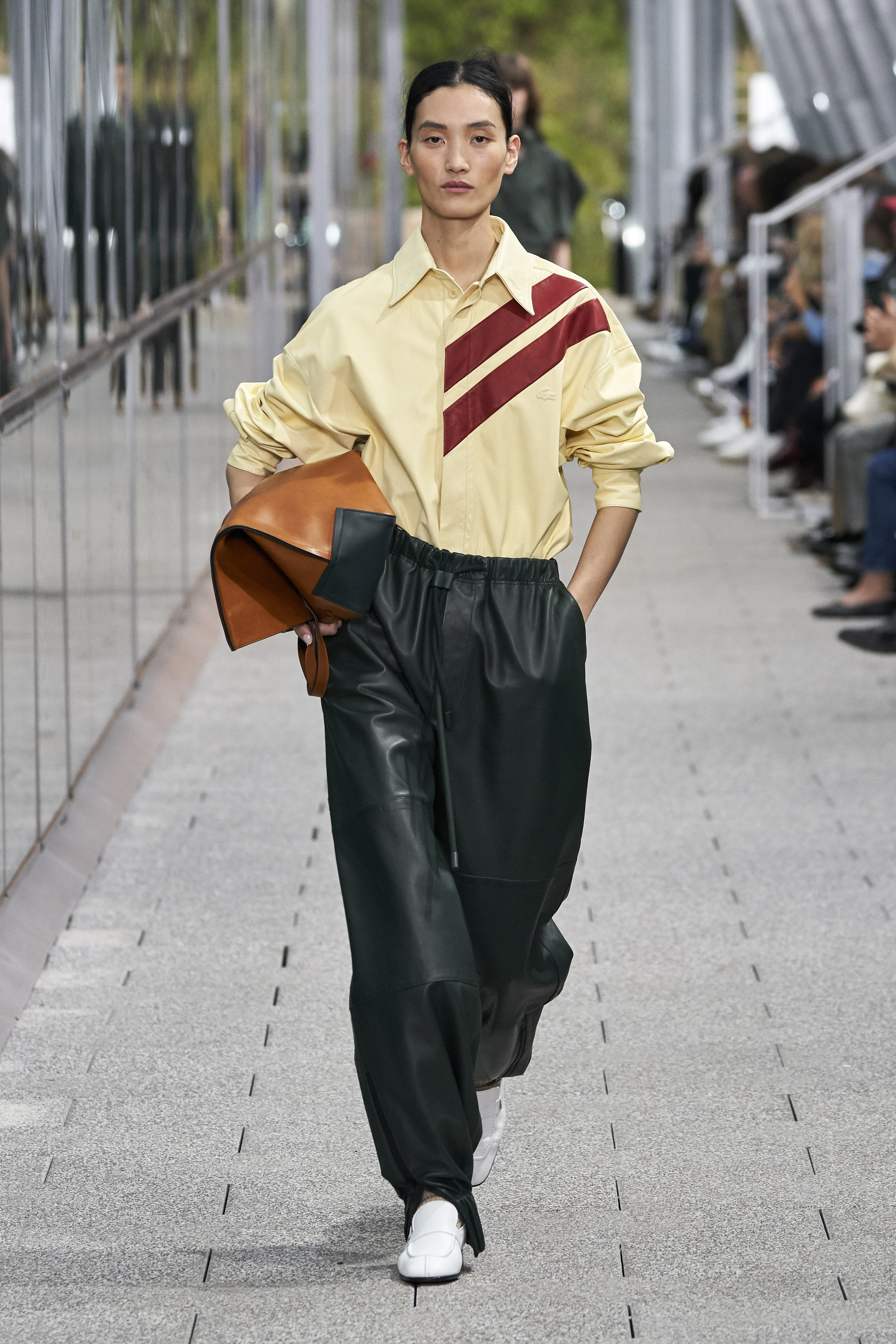 Arriving at Roland Garros on Tuesday afternoon, black cars were banked up, snaking around the bend. Men crunched through autumnal leaves in lime green ribbed knit vests and stacked sneakers. Women trotted down in block heels, bucket hats and blazers. This was certainly not a day out at the tennis. In keeping with Paris’ erratic weather of the week, the sky flitted between bleaches of sun and a glum, grey canopy. Would Mother Nature be kind to Lacoste (and my hair which had just been coiffed at a seemingly unchanged salon from the ’50s)? Of course it would! It’s fashion week.

Only 20 minutes from the Eiffel Tower, and the setting suddenly felt very provincial. There was a quaint limestone cottage to the right, flourishing foliage to left, and an abundance of trees. A stream of adolescent kids with lovely skin and cute accents ushered us in. There must have been 50, wearing matching track tops and pants in stark white, they were hard to miss (and thankfully so, this place was confusing). Over the speaker, a French commentary not dissimilar to the one you’d hear during a Grand Slam. Julien Benneteau, captain of the French Federation Cup team, was playing a practise match with prodigy Tiago Pirès, or ‘Petit Croco’, on the Simonne Mathieu court. A perfect warmup for the action that was to follow.

Today, the chez of the French Open would play host to Lacoste Spring Summer 2020, marking a return to Roland Garros, the spiritual home of French tennis, and the terrain of René Lacoste, its founder and champion player of the 1920s. This court, however, felt very new; its blonde wooden seats as if they’d just been carved, the smell of fresh paint in the air. But perhaps most surprising was the greenhouse. Like something out of a zoo, or museum, lush herbaceous vegetation thrived behind a kind of giant glass cloche, both pristine and artful. It was great for fashion, unusual for sport, but it was against this backdrop of the Serres d’Auteuil Greenhouse – not the dusty red clay of the court – that Lacoste’s forthcoming collection came to life. And what a collection it was. 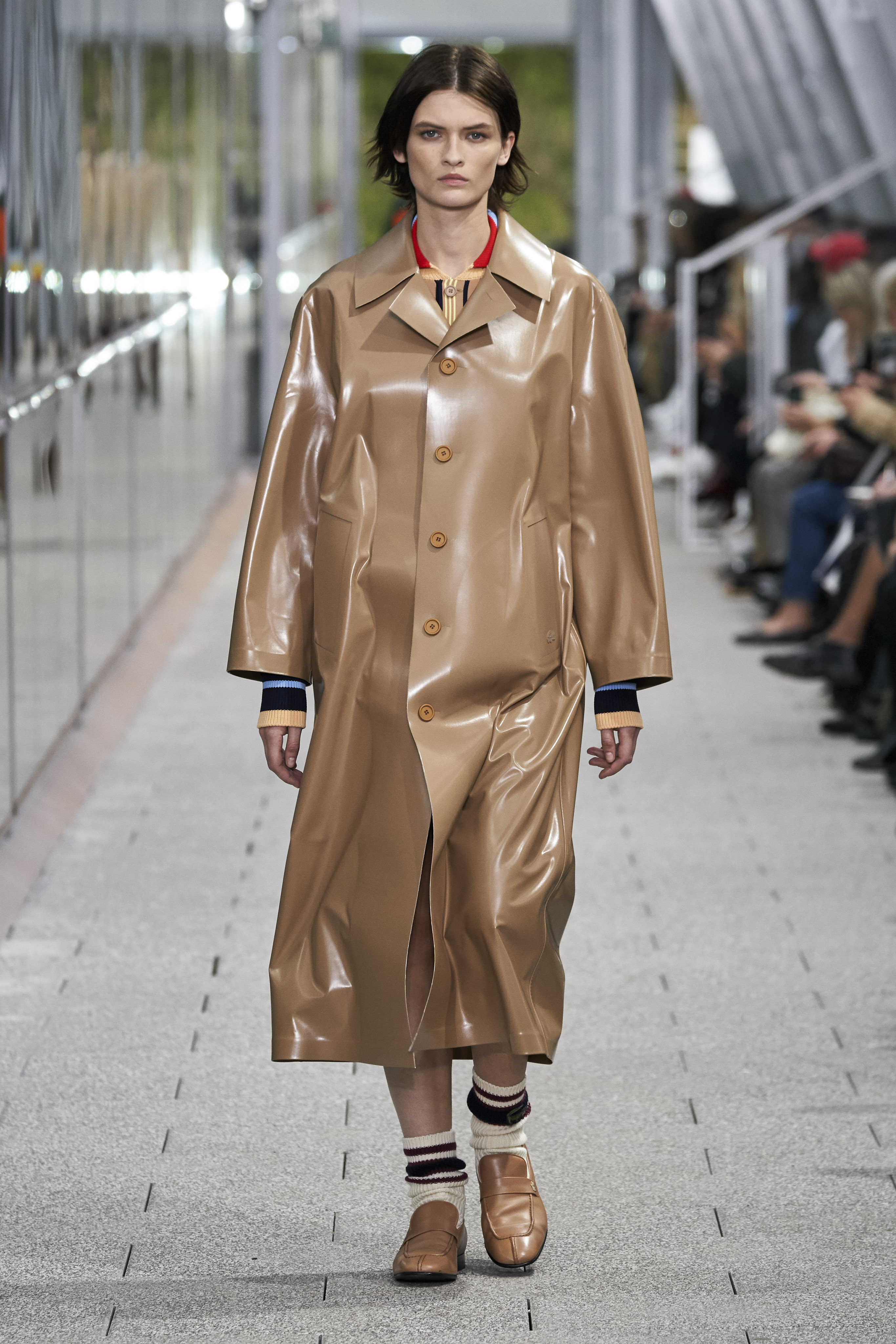 With its obvious tennis ties, the dialogue between Lacoste and fashion is typically one of sport. Of course, its great strength will always lie here; its famed polo tops and chomping crocodile logo as important to tennis as winning is to Federer. But this collection proved the brand stands for so much more.

At home in this historic setting, Creative director Louise Trotter ushered in a new era for the brand, one of spectacular tailoring and a kind of refined sporty elegance only witnessed in bygone eras. Celebrating a soulful union of sports, heritage and style, Trotter mused on the unexpected icons of Lacoste history, yet challenged tradition with contemporary verve. 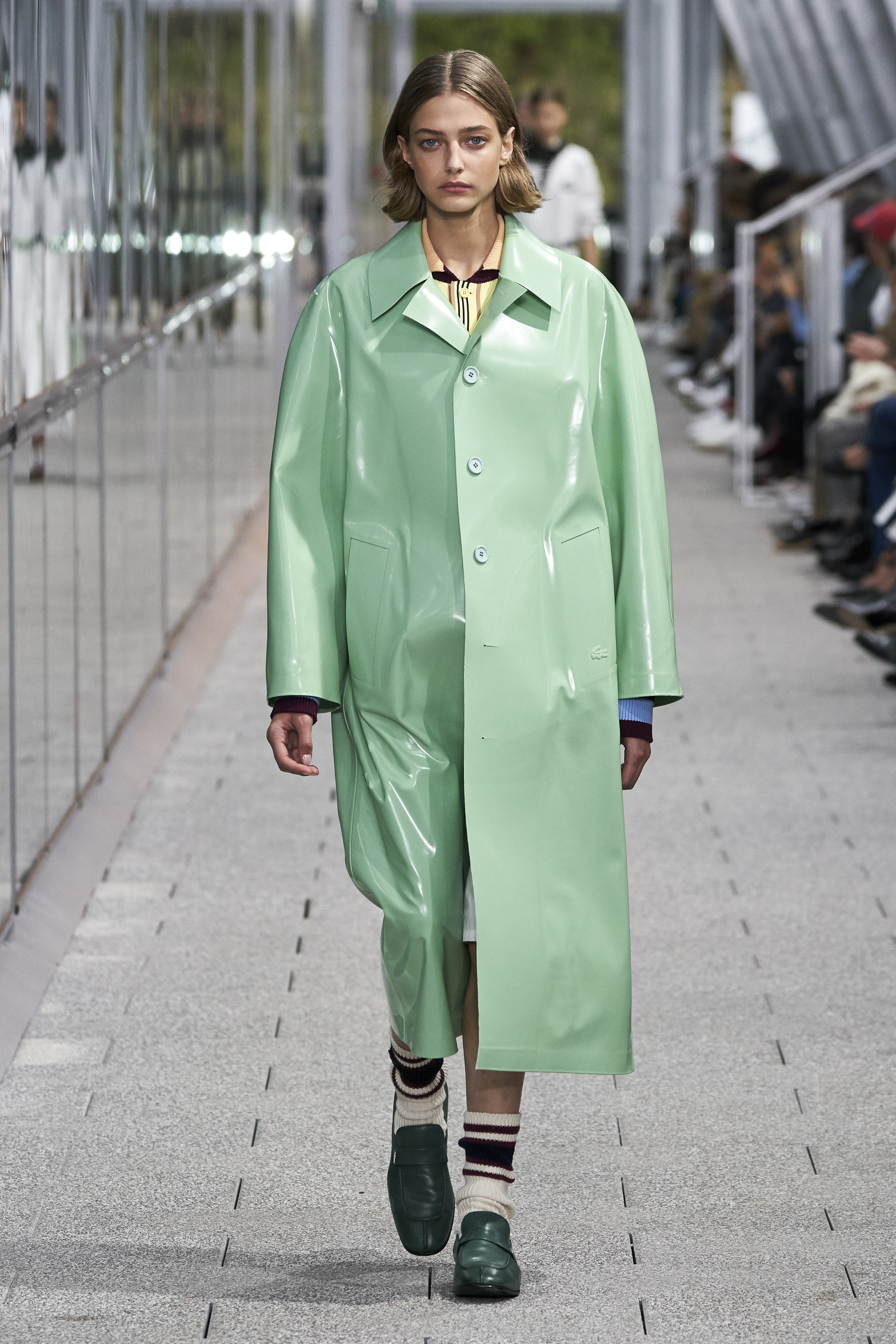 It began with an intimate souvenir of John F. Kennedy Jr. packed up for summer camp in his Lacoste polo shirt, which summoned Trotter’s mood of nostalgia. There was also René Lacoste’s drive from Dieppe to Deauville with Suzanne Lenglen (a world champion known for her grace on and off the court), another historical tidbit which shaped the course of Trotter’s new Lacoste.

But along with its sporty silhouette and leisurely pursuits of the everyday, the collection felt supremely elevated. Along with sublime tailoring, leather starred; in spearmint, canary yellow and camel, oversized coats and drawstring trousers were rendered in high-shine gloss and even more delicious in real life. Proportions were exaggerated; parachute jackets extra puffy and sleeves capacious, while the addition of a deftly tied neck handkerchief – even in leather – was the perfect, albeit unexpected nuance. There were even cumbersome but very cool macro pouches, which essentially rendered the daggy sports duffel all but redundant. 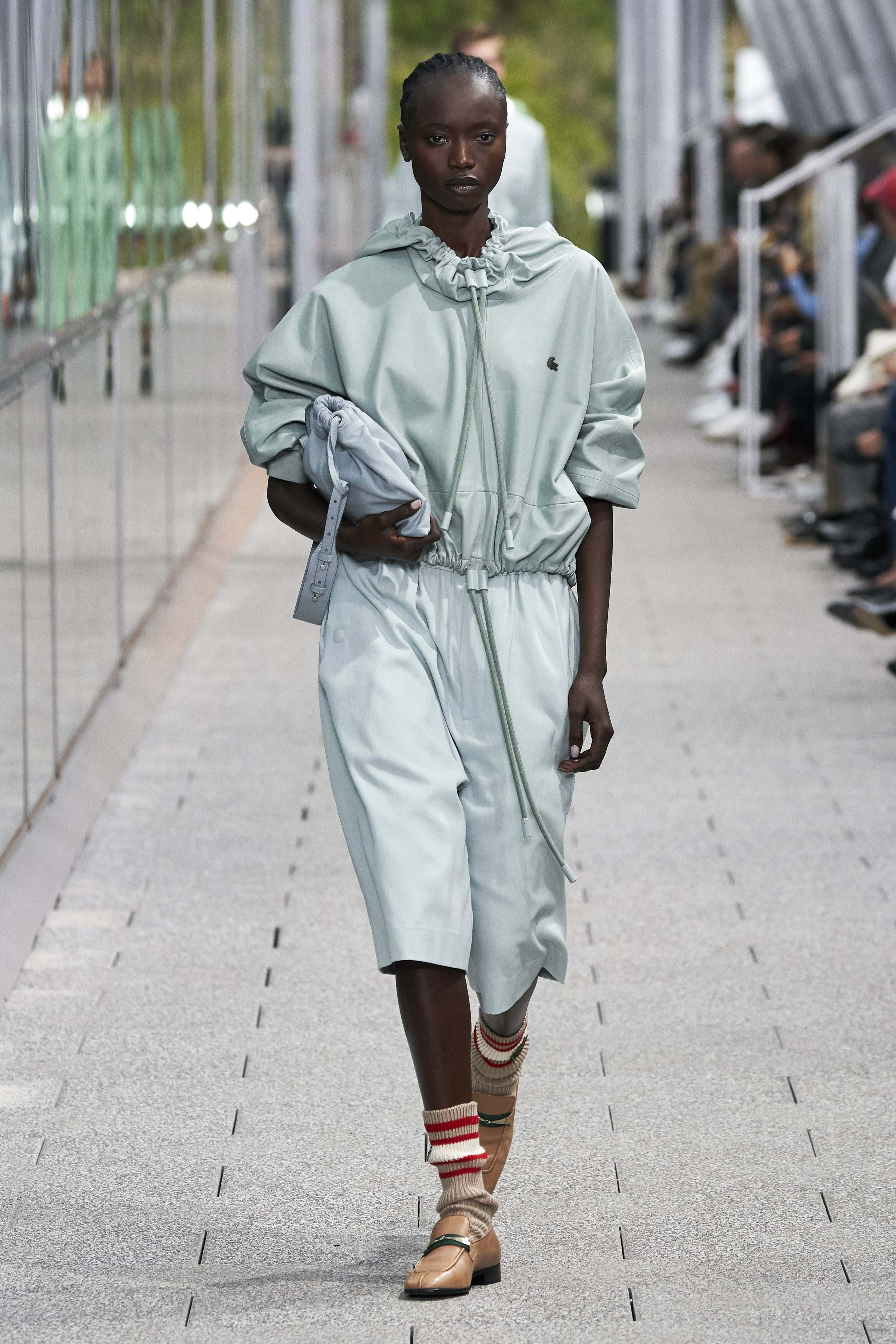 But along with the high-fashion (top)spin, tennis and golfing originals were reworked. A Lacoste icon since 1927, the piqué polo was reimagined with a modern hand in squared proportions and magnified details of leather and knit. Joining an Art Deco typeset logo and the all-over ‘L’ monogram, Robert George’s 1926 crocodile was writ large on chest pockets and washed canvas beach bags, or discreet as hardware on slip-on loafers.

Another example of tradition and innovation colliding was the collaborations. Tapping two British female designers, collaged sneakers were handmade by Helen Kirkum, upcycled from last season’s styles into new hybrids. While the crocodile has been cast anew as Alighieri for Lacoste, with brass pendants and bracelets by very hip London jeweller Rosh Mahtani, transforming the house symbol as a totemic keepsake.

As the models – both male and female – zipped past in graphic colour and refashioned crocs, they made their way in single file down to the court. Forming an orderly jumble near the net, a dark sombre cloud rolled over Roland Garros parking itself directly above. A moment to soak up the glorious collection in its entirety, as the last model took his final steps off court, the rain fell. It poured. It lashed the greenhouse with such might, it trumped the roaring soundtrack. Lacoste-clad fashionistas huddled, getting whipped by bouts of lateral rain, incredulous at the fortuitous timing. It seems someone was looking out for Lacoste today. And rightfully so. Nothing would rain on that marvellous parade. 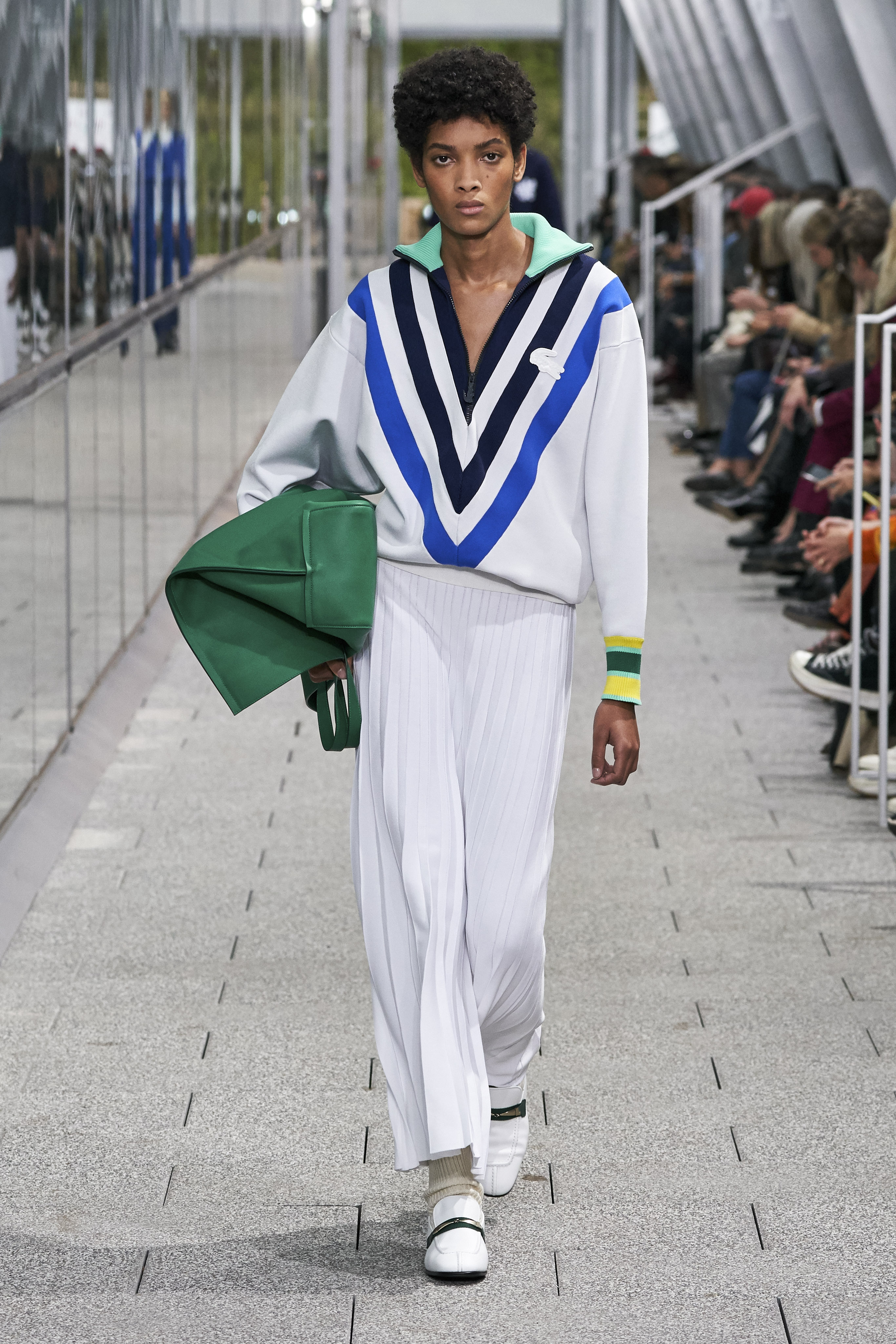 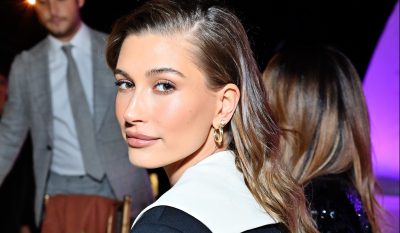 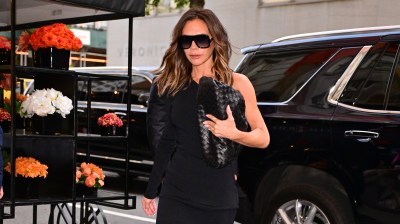 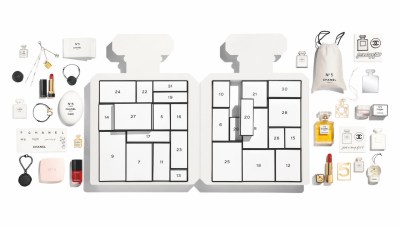 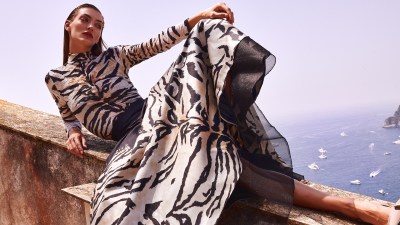 Is Freedom As Easy As We Remember?
Next page