Isabella Blow: A Fashionable Life promises to be the year's most fascinating exhibition of fashion from a true iconoclast, thanks in no small part to the attendance of one very special guest

What promises to be an unmissable exhibition dedicated to the life of the late British fashion icon Isabella Blow, whose creative patronage launched the careers of the most distinguished names in fashion including Alexander McQueen and Phillip Treacy, opens next week at the Powerhouse Museum in Sydney – just in time for both Wool Week and Australian Fashion Week.

Isabella Blow: A Fashionable Life mines the illustrious archives of Blow’s staggering personal collection of avant-garde haute couture and mind-blowing millinery, which was bought at auction in its entirety by the incomparable British artist and heiress Daphne Guinness, who established a foundation in Blow’s name to preserve her inestimable legacy.

Blow’s close friend and likeminded successor in both her patronage of British fashion and aristocratic eccentricity alike, Guinness will also be travelling to Australia for the opening of the exhibition.

Writing in the Financial Times shortly after acquiring Blow’s archives in 2010, Guinness described her intentions to acquire and publicly exhibit Blow’s collection thusly:

“I would like this unique collection, marked by her grace and the fact it was so intimately hers, to allow people (whether students, lovers of fashion, historians) to remember her and benefit from her legacy. For that, it needs to be kept whole; it is like a diary, a journey of a life, and a living embodiment of the dearest, most extraordinary friend.

“In this way all of Issie’s friends will have access to something that no one should be afraid to call by its proper name: Isabella Blow’s Work of Art.”
A Fashionable Life’s residency at the Powerhouse begins on May 14 and has been extended until August 28 by popular demand. You can find out more information here. 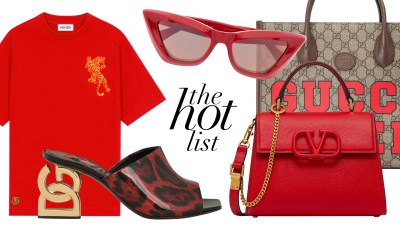