MEET THE WOMAN HOLDING THE KEYS TO THE HERMÈS UNIVERSE

She may be a giant in the luxury fashion arena but Bali Barret – swathed in a simple black silk Hermès dress when GRAZIA arrives to interview her – is as petite in person as she energetic. On this day, her verve exists despite having worked into the early hours of the morning, her third very late night in a row, under the duress of the typical jet lag that accompanies a recent 12-hour dash from Paris to Shanghai.

“I’ll take an expresso,” she says in English to a colleague as she settles into a café chair outside the Long Museum in the Chinese metropolis. At 11am, it’s her first break but third cup of the day. The coffee arrives and she pushes the saucer and token biscotti to the side, reaching instead for an ash tray in the centre of the table, ready to chat.

The Paris native is Artistic Director of the Hermès Women’s Universe, meaning she oversees all aspects of the women’s ready-to-wear, silk design, accessory production and even fragrance direction. Quite simply, she’s integral to the creative process at Hermès International. While Nadège Vanhee-Cybulski has been the company’s Creative Director since 2014, all roads under her still intersect through Bali (pronounced Bal-ee) Barret. Today in particular, the latter admits, she has no time to be tired.

Rather, when we cross paths, her focus is on commanding the installation of an epic nine-room event intended to showcase the brand and its ethos to almost one thousand Chinese VIPs, a key market – as with all luxury labels – for her employer at present. For the half hour before, despite her workload, she’d walked GRAZIA through the museum construction site that would later transform into her carefully considered ‘Hermès Club’, a nightclub themed party intended to showcase the classic house’s spirited, dazzling side after dark.

Gliding through one bustling room that’s still mid-metamorphosis, she points to a large tray of would-be snacks that lies on the ground. “It’s actually for the smell,” she says of the pineapple slices piled there. “They get rid of paint fumes – a trick I learned last time I was here in China.”

It’s a comment that sums up Barret aptly. A talented creative who studied at the prestigious ESMOD international fashion design and business school in Paris and started her own label before joining Hermès in 2003, she is all about achieving the ideal contemporary result using classic methods and a very open mind.

“I think being traditional doesn’t have to mean serious and boring,” she says. “Our job as creative people is to prove the contrary. Hermès has never been a passé house… when you’ve existed for more than a century, people think maybe you’re too classical, which is just not true.”

Indeed, that is practically the modus operandi for tonight’s grand VIP customer event, she suggests, which will boast faux salons and gaming rooms as well as real bars and a dance floor, all created under the expert guidance of set designer Antoine Platteau.

It’s the second Women’s Universe event to be showcased in China in the past year, but in stark contrast to the one held in Beijing last October that featured an elegant but mesmerising ballet performance choreographed by iconic New Yorker Lucinda Childs. Instead, the central entertainment for Shanghai has a far sassier, sexier undertone.

Molina’s co-stars? Twenty statuesque models clad in the Autumn/Winter 2017 ready-to-wear collection, along with her own band and a set of six-foot-high boxes in the brand’s signature orange that opened like dolls houses throughout the energetic 20-minute show.

“Beijing was about a certain facet of the Hermès woman – that [event] was sophisticated, very calm, very graceful,” Barret reflects. “Here, we wanted to be different, to give another view of the Hermès woman. I could see in Nadège’s last collection… an incarnation that was more joyful, colourful and graphic, so we thought the idea of the club full of entertainment was a good way [to represent this].

“It’s to express the fantasy of Hermès also, which is something quite [central] to the spirit of the brand.”

Barret is certainly no stranger to fantastical colour and graphics. Her first role with the fashion house in 2003 was as Artistic Director of Feminine Silk, at the personal invitation of Pierre Alexis Dumas, great-great-great grandson of the company’s founder Thierry Hermès.

To say the printed silk element of the business, which Barret still oversees, is fundamental to the house is quite the understatement. From a retail perspective, its signature scarves are elegant, edgy and an affordable touch-point for many new customers to the house, particularly the much-courted millennials, who can now easily shop them at the brand’s online store without fearing size woes.

From a craft perspective they symbolise Hermès’ commitment to luxury workmanship, regardless of the time it takes to achieve – which is sometimes, in the case of Barret’s hand-made silk scarves, up to three years per piece. But why such a long lead-time for what is essentially a section, albeit a beautiful one, of patterned fabric?

In The Red Ballroom: silk scarves housed in a giant birdcage-like structure swirl like a mobile symphony orchestrated by Jean-Paul Goude © Hermès 2017
“It takes time to do things beautifully,” she reasons. “Creating the [scarf’s] design artwork can take up to one year, then once the pattern is finished, we start the engraving, which is designing and separating all the different slides of the print pattern by colour by hand, sometimes be 10 to 14 layers, which can take nine months.” Is that why Hermès is considered one of the most prestigious luxe labels in the world?

“Luxury means different things from one brand to another, but in our house it is two main things: quality and time. Quality means quality of materials and fabrics, which is very important to us, and manufacture. And time means the time [it takes] to make things. You can manufacture a scarf in five minutes and a bag in two hours, but understanding the difference and beauty of a longer exercise means understanding [its value].”

Later that night, once the hundreds of glamorous guests have rolled into her one-night-only ‘Club’, GRAZIA sees Barret again. She has swapped her flat day sandals and black shift dress for a bright blue and white silk jumpsuit offset with pink toenail polish, and stands laughing on the dancefloor next to shoe maestro Pierre Hardy, Hermès’ footwear and accessory designer since 2010.

Despite her celebrity status amongst Chinese fashion enthusiasts and vibrant party ensemble, she practically blends in with the party crowd. “It’s not about statement or status or whatever,” she’d confessed earlier in the day when describing what Hermès and its ethos mean to her. “The experience of beauty and quality is something special.”

And we suspect any one of her thousand Shanghai soirée guests would have said quite the same of the fantastical Hermès Universe she created just for them. 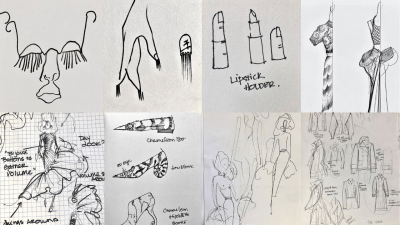