In Conversation With Chef David Thompson

The chef who took greasy Thai takeout to Michelin-starred fare sits down with GRAZIA to chat collaborations, street food and how his new project will be different from the rest

Endearingly frank, devilishly impudent, chef David Thompson is not afraid to tell you what he thinks. With refreshing candour and a slightly sore head (he had just entertained over 200 guests with fellow chef Jock Zonfrillo at his restaurant Long Chim the night before), here the patriarch of Thai cuisine sits down with GRAZIA to chat collaborations, street food and how he took Thai cuisine from greasy Pad Thai takeout to Michelin-starred fine dining. 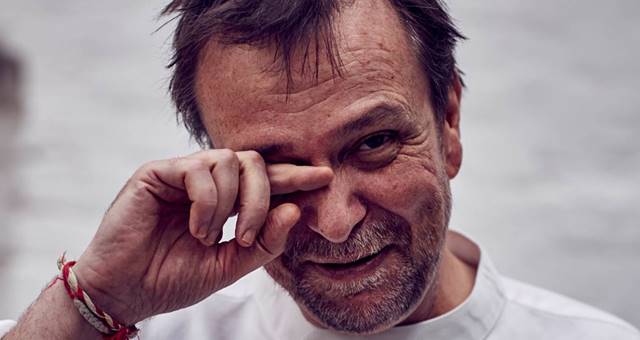 GRAZIA: It was a big night last night, but successful, yes?
DAVID: I think so. I think if success means we have finally prised the guest chef out of the bar at 5:30am this morning – and I think it’s most people’s measure of success – then we did have a very successful night. But do you know the infuriating thing about Jock Zonfrillo? I think you should begin with this, that [redacted] doesn’t suffer from hangovers. I think it’s because he’s a ginger – and you know how they say gingers don’t have souls – I can’t think of any other reason [laughing]

G: So last night was a collaboration with Jock Zonfrillo, and I know you’re about to embark on a new one with Danny Bowien, tell me why you do collaborations and why they are so important? And are they important to the food scene as a whole?
D: I have no bloody idea; I’ve never really done them before.

G: This is the first time?
D: No, second or third time. But I would go to other people’s restaurants and I would take it over, so this collaboration with Jock was the first time we’ve ever done one where there’s been a literal blending of cooking in a dish or served in the same courses. I’ve always been quite, not stern, but decided where I don’t want to inflict my food upon other restaurants and other chefs, because the style of food that we muck around with is so strong by its very nature, it’s going to just knock other food off the table. So I’ve always been reluctant to have collaborations but strangely enough Jock and I were out drinking one night and we had a bet, and I’m not sure who won it or lost but whatever it is we ended up here.

G: Back to where it started, drinking. It came a full 360!
D: Exactly. So 360’s we did, we certainly several 360’s last night, spinning around just thinking what are we doing?! And then Danny Bowien I’ve liked for a very long time. He’s coming in but he’ll take over.

G: So it’s like a full take over?
D: Yeah, I’d rather do that, I hope he will do that. I realised last night because although while it was collaborative…

G: Too many cooks spoil a…?
D: Well, they do. They can’t help but do something. I showed restraint, I did very little. I took a step back and there’s a smear of me here or there on a plate but that’s about it, it was mainly Jock who did all the work, and all the damage. My head chef and Jock did most of the work, and it worked rather well I must say some of the combinations were quite good, I played around with one or two things

G: Give us an example of one if you can remember?
D: Well I’m afraid I can’t I have a really awful memory, I’m sorry ha ha. Well, some stir-fried clams because it went with some braised pork and stuff like that. Jock’s braised pork with some kind of chutney and I just did some stir-fried clams on the top. There was other stuff, but it was mainly Jock’s creation, that you’ll never do again, because poor Jock usually does 30 or 40 people so I didn’t have the courage to show him that we were doing 200 people, until he virtually got there.

G: That’s a nice surprise!
D: Yeah no, luckily I was in a different country so he didn’t have a chance to really ring me.

G: I think that’s the best way to spring something on someone, because they’re at a distance they can’t do anything.
D: Do you think so? ‘I can’t hear you…the phone obviously has bad connection’! 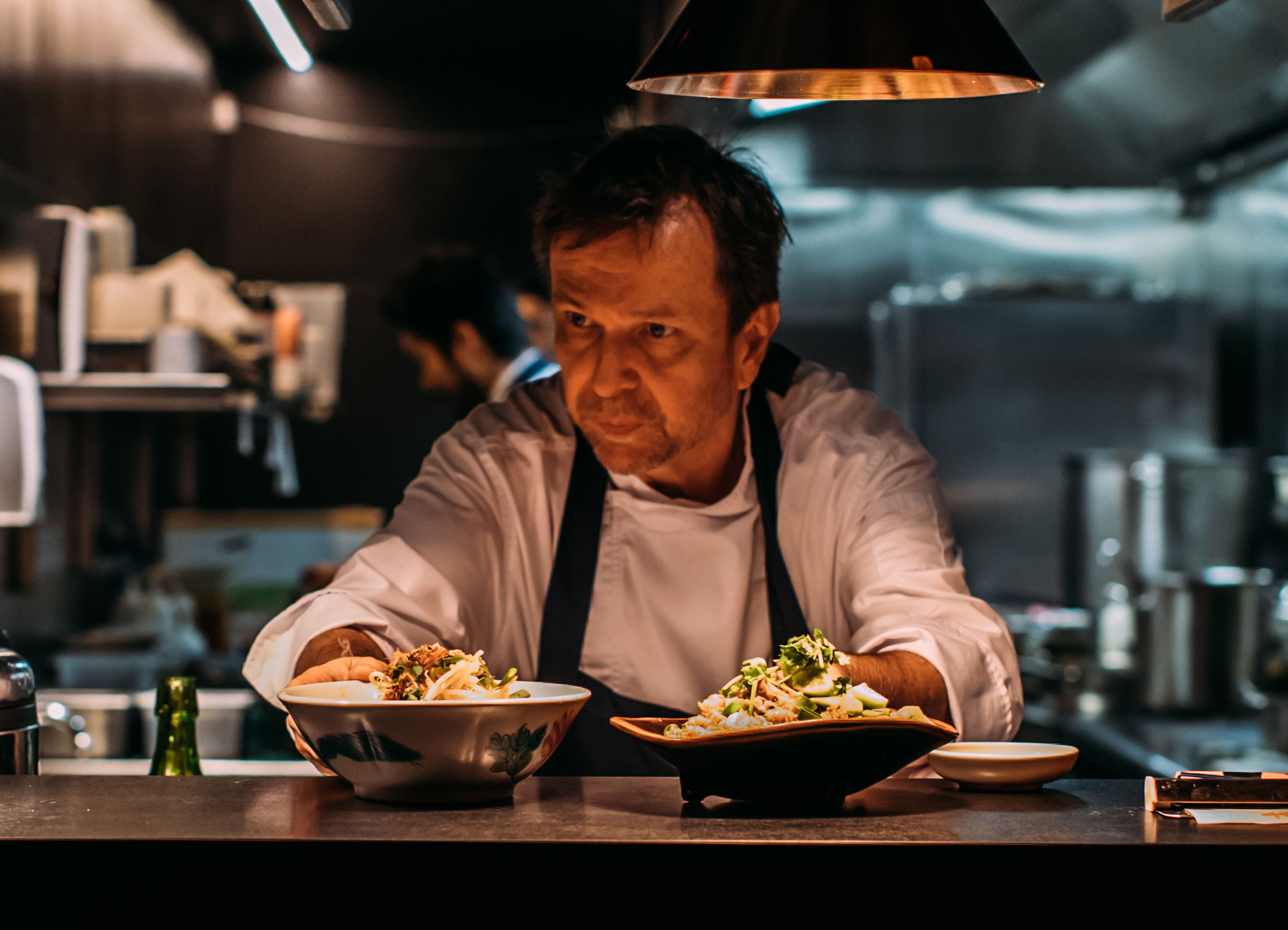 G: Exactly. Obviously your whole thing is Thai food, and I know that you love the streets of Bangkok and that’s where it all came from. But what did you like about it? And how do you reference this and incorporate this in your work?
D: I was at a restaurant called Nahm which has more regal food and more traditional food than just street food. But there are various strands to Thai food and Thai cooking, you can have the home cooking and the royal cooking and all that, which is delicious in the food we cook in Bangkok, but the food of the streets also has merit, too, with noodles and stir-fries and deep-fried dishes and salads and seafood and so on. And at Nahm we did the pure stuff, but when I was proposed some ideas for doing stuff outside of Thailand, I just had to take on a little of what customers want, the foods of the streets of Bangkok are the foods most people are familiar with. Whether that be the noodles, the pad Thai’s, the noodle soups or whatever else, whereas the regal stuff like the food we did at Nahm was far more obscure. It’s more Thai, actually.

G: Like traditional Thai?
D: Yes, but it’s not too what the customers are necessarily familiar with.

G: Does the street food of Thailand have influence from other Asian countries?
D: Yes, absolutely, half of it is Chinese. The stir fry, all the noodles, roast duck and pork etc. It’s all Chinese. You can almost chart this history of immigration of through the street food of Thailand because you have various waves of people coming through. Because a lot of the Thai people were famers, these people came in, couldn’t farm so the commerce they had was the food, they couldn’t set up their own businesses apart from small little ones, and it was good.

G: I feel like you’ve played a part in the changing perception of Thai cuisine. You know, it used to be take away Pad Thai and now it has become fine dining. How has it gone from that?
If I have done that, then I’m glad that I have because it’s a cuisine that has that merit and that worth, and the tastes, flavours, dishes and styles that make it so agreeable and so delicious and so comprehensively good. 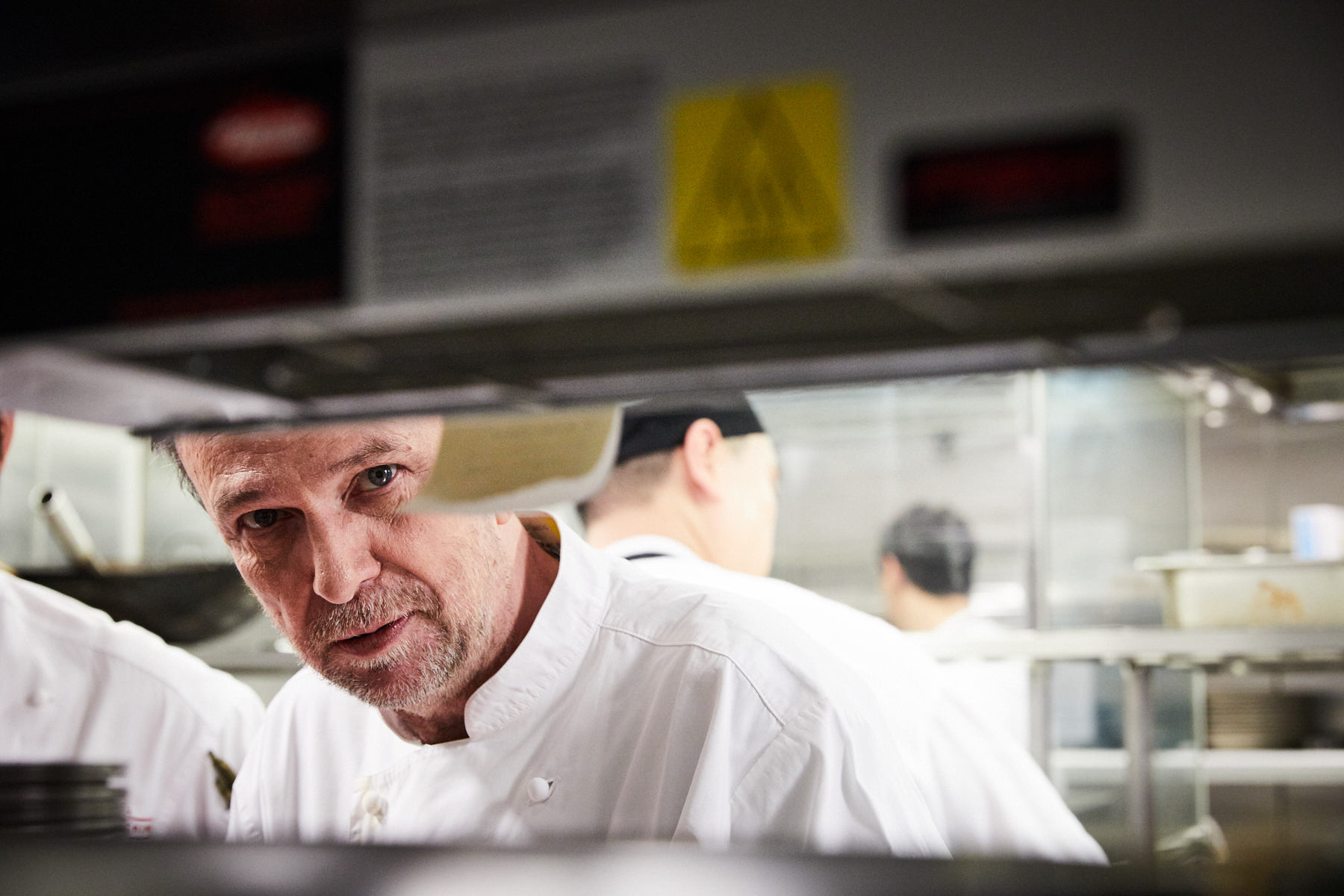 G: What drew you to it initially?
D: Accident. My life is full of accidents. I look back and it looks as if I’ve planned a career with calculation but that isn’t true, at all. It’s a matter of circumstance, serendipity and love

So it was just literally a career of chance?
Chequered, you’re looking at a chequered career. And so, I went there on holidays and was just seduced by the place. The food, the sun and that culture which is just lovely it’s just such an agreeable culture that the Thai’s have, a different value on living and it’s about enjoying themselves rather than work, and that languidness is very agreeable and appealing.

G: Do you think that comes through in the food?
D: No. there are three things they get rather strict about, it’s their *9.06* their devoted to their *9.13* their food, and religion. But everything else they are quite easy about.

G: Tell me why you closed down long chim in Melbourne?
D: It was just perhaps a business decision that was coming to a close we just decided neutrally that was time to do it. Alas, I like Melbourne, but I think I would rather do it in a smaller place next time.

G: Tell me about the new project in Bangkok.
D: It coming along quite nicely – end of March.

G: A new and improved Nahm.
Yeah look, every time I opened up a version of that which was originally years ago then moving to London and then back to Bangkok, each new iteration of that restaurant became better because it had to.

G: It has to evolve it can’t go backwards.
D: Exactly. But also times change, and you need to not update because it sounds so wrong to have to update but rather you owe it to your customers to as you say, evolve, but to improve. And so the one thing I hope to be doing there is trying to feed to more to the land than ever before. So we will be engaging farmers to start to grow things for us and the menu instead of it just being dictated by cooks and the recipes we are also going to be dictated more firmly by the soil, by the dirt, by the farmers and the land. Which is kind of the only way I could see to improve, and please don’t think that it’s so perfect and I’m so smug, but from a cooking side we’ve had some great cooks through there and they will continue to have that, from the menu side it’s a traditional menu structure and there’s no point in changing that because it’s correct. And so the only way that I possibly could do it is to expand the quality and the origin of the vegetables.

Kate Hudson’s Stylist, Sophie Lopez, Gives Us A Lesson In Dressing With Colour
Next page