The alleged sex offender cried, yelled and towered over her – but she didn’t budge 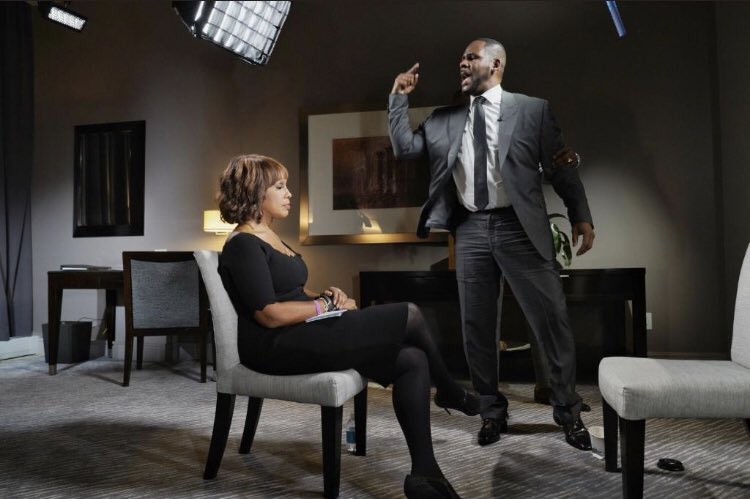 In stunning scenes, alleged sex abuser R. Kelly yelled, cried and abruptly stood up during an interview with Gayle King that aired on CBS This Morning on Wednesday.

After the first half of the two-part interview went to air, viewers (including close friend Oprah Winfrey) took to social media to express their admiration at how composed King remained throughout the encounter.

Bravo @GayleKing for calm and and steady focus during #RKelly interview. Outstanding job!
Tell @CBSThisMorning we want to see the whole thing.

As video clips of @GayleKing‘s sit down with R. Kelly spread across social media Wednesday, it was this still photo of a professional woman remaining calm in the face of a man losing control that became the most indelible image from the interview. https://t.co/ypRqS2veeR

Speaking to O, The Oprah Magazine, King explained of her ability to show no fear:

“I was not scared. I never thought he was going to hit me,” King, a seasoned journalist and interviewer, said.

“So what I was really thinking to myself was: I’m not done with this interview, so I’m going to let him have his moment. If I stood up even to comfort him, that could have been his invitation to say ‘This is over.’ So I didn’t interrupt his anger and let him have that.

King made sure to underscore she didn’t think Kelly had any intention of hurting her.

“I did worry at some points that he might accidentally hit me, because he was so angry that he was flailing,” she added. “But I knew that I wasn’t in any real danger. I just kept thinking ‘Okay, Robert, go ahead’ and that’s what I said.”

At one of the most emotional points in the 80-minute conversation, the 52-year-old stood up and bellowed, while beating his chest:

The second part of King’s interview with the disgraced singer airs Thursday morning in the US (overnight Thursday/Friday AEST).

The charges concern four women in incidents spanning 1998- 2010. Each count could see him spend three – seven years in prison. If he is found guilty on all counts and receives the maximum sentence for each, he could spend 70 years behind bars.

The charges came after a video allegedly showing R. Kelly assaulting a 14-year-old girl was handed to authorities by lawyer Michael Avenatti, who is representing a whistleblower in the case.

His first court appearance is set for March 8. He denies all allegations against him.